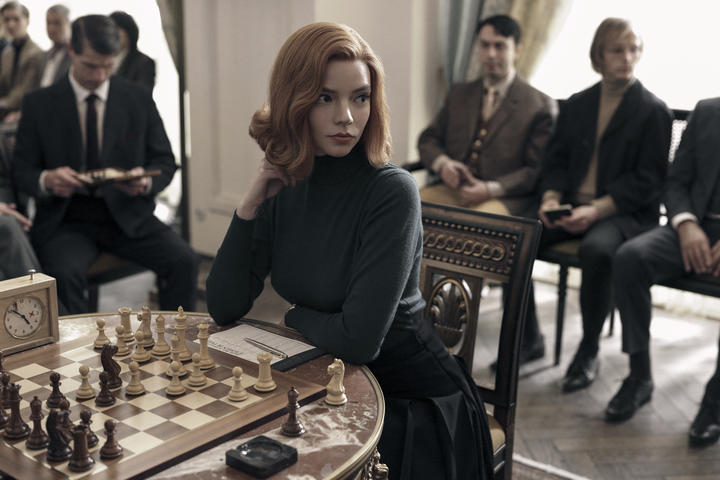 The last time I played chess would have to be about 40 years ago. I was challenged to a game by a mate named Leslie Bolton who was quite good. When I could see no way out and offered to resign, he immediately swapped the board around and proceeded to beat me again from my ‘losing’ position. Some people might take that as a challenge to actually get better at the game and provide some decent competition but, even at that young age, I already knew that life was too short and I haven’t bothered to play since.

But even that ancient experience told me that the performative chess play in the Netflix series The Queen’s Gambit was accurate, even before I read that the show made use of several on-set chess consultants including famous grand master Garry Kasparov. Evidently, all the setups and all the moves featured in the show are legit and I, for one, am willing to take their word for it.

Anya Taylor-Joy (Emma) plays orphan Beth Harmon, growing up in a conservative 1960s Kentucky children’s home and, at first unwillingly, tutored in chess by the school handyman (Bill Camp). It turns out she is a prodigy and is soon whupping all-comers and devouring books such as Modern Chess Openings. A win at the Kentucky open championship opens her eyes to the possibility of prize money and an escape from the oppressive Christian environment in which she lives. 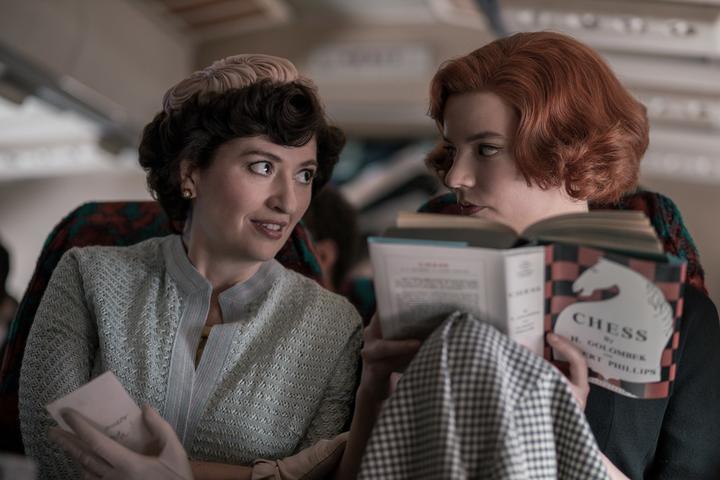 A chance adoption – she lies a little about her age – takes her to suburbia where her lonely new mother (Marielle Heller) discovers her talent and earning power and tags along for the glamourous ride, a ride that takes them to Cincinnati, Las Vegas and Mexico among other places.

All the while, she is learning the delights and pitfalls of adulthood, including unrequited love, unrequired love, alcohol and sedatives. It’s enormously entertaining, much helped by Taylor-Joy who, even when she’s acting miserable, seems to be enjoying herself enormously. She has this little turned up nose that reminded me of Jack Wild as Artful Dodger in Oliver! and she does have a default state – a resting face they call it, don’t they? – that seems primed for mischief.

The Queen’s Gambit is written and directed by Hollywood big shot Scott Frank (Minority Report, Logan and the recent Netflix series Godless) and it is based on a novel by Walter Tevis. I thought the name sounded familiar, too, but imagine my surprise when I clocked that he was also the author of The Hustler (adapted into the classic 1961 movie starring Paul Newman) and The Man Who Fell to Earth (adapted into the classic 1976 movie starring David Bowie). That guy! 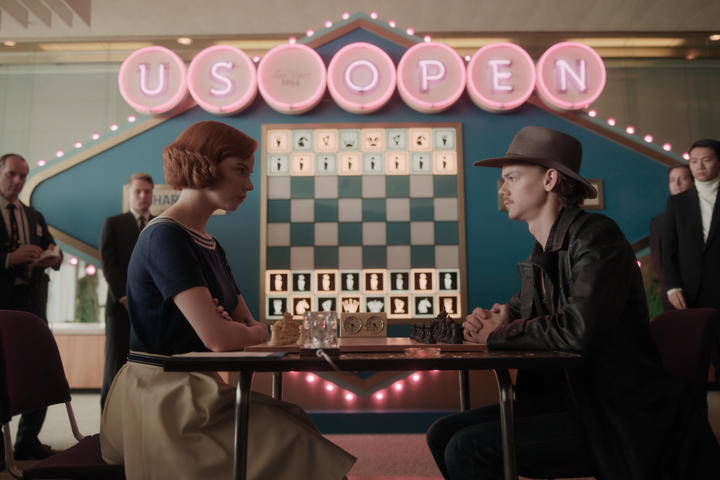 Like everyone who watches lots of films and TV, I have become accustomed to the kind of movie magic that fools us into thinking we are looking at 1960s New York when it is actually a studio backlot in Hollywood, but even I was astounded to discover that The Queen’s Gambit crew never set foot in the United States, with most of the series shot in Berlin of all places (with a bit of Ontario, Canada, for some countryside and suburban housing).

Most of the supporting actors are European, with better than passable accents, and the production team have found dozens of German locations that they manage to persuade us are Kentucky high schools, Las Vegas hotels, Mexican zoos and Moscow restaurants. If nothing else, it truly is a triumph of location scouting and production design. We should be grateful that there’s still plenty of intact mid-century architecture left in Berlin.

I hear from women in the chess world – also women who were alive in the 60s and women who are alive now – that The Queen’s Gambit is more accurate about the chess than it is about the treatment of women chess players by their male peers. The show appears to think of the young male players as rendered (mostly) helpless by Beth’s prowess and also enfeebled by her beauty. This would be wishful thinking, I suspect.

No matter, The Queen’s Gambit is great entertainment and absolutely flies by.

By the way, my chess-loving mate Leslie Bolton was an asthmatic and not long after my chess humiliation, he died in his sleep. He was only 13 and I still think about him often.

The Queen’s Gambit consists of seven episodes that are between 45 and 67 minutes long. It’s streaming now on Netflix and is rated 16+. Netflix displays more detailed content warnings at the beginning of each episode by which time it is usually too late to bail out.