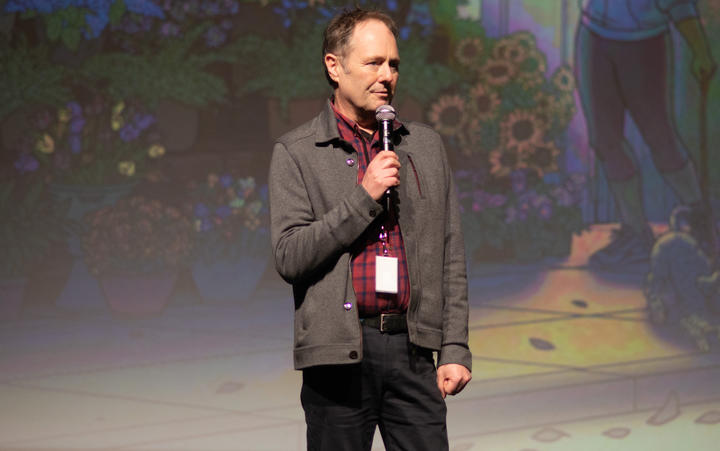 Today should be Bill Gosden’s 67th birthday. I find that fact astounding. Even though he has been influencing my life for decades, I would never have picked him for 67. It’s astounding in another way, too. 67 is no age at all – the president-elect of the United States is ten years older – and I had hoped that Bill would be a presence in the New Zealand film community for much longer than he was. When he announced his retirement as director of the New Zealand International Film Festival due to ill-health in December 2018, he ruefully admitted that he’d been planning an actual retirement at the age of 70 but that choice had been taken away from him.

When I first came upon the festival in the mid-eighties, meeting Bill shortly after, I thought that he had the best job in the world. He got to travel the globe to film festivals – Rotterdam, Berlin, Venice, etc. – and watch films. Then he would get to write about those films, introduce them, advocate for them and experience the wonderful joy of connecting people to them.

I wanted that job desperately but it was the only one like it and Bill had it. And he had it for four decades. And it was impossible to be churlish about how long he was in the job, because he built the job himself.

There were never any guarantees that a small market like New Zealand could support an event as comprehensive and– to be honest – as arty. Bill understood that and he never took any of those audiences for granted, trusting that he had to win them over again each year.

His dedication to the business of the film festival is one area I think has been overlooked in the memorials I have been reading. He was always aware of how fragile it all could be while at the same time projecting an image of solidity and success. Those closing night speeches where he would reveal that – once again – audience numbers had broken new records were crucial because few festivals in the world rely as heavily on ticket sales as NZIFF.

He was a staunch protector of the brand. When I first met him in 1987, it was because I was a student radio movie critic trying to blag some free tickets. He offered me a pass to all the daytime Embassy sessions provided the reviews ran the same evening – driving sales for future sessions – so I dove on in, watching and reviewing two films a day for two and a half weeks.

Shortly into the festival, our sales manager scored a Courtenay Place restaurant sponsor for the segment, which for a cash-starved outfit like ours was a godsend.

The morning after the first sponsored segment aired, Bill rang and – in that careful and sonorous voice festival goers are so familiar with – he gave me a piece of his mind. “I do wish you had talked to us before you did that,” he said. “They’re really not the quality of establishment we want to be associated with.”

Back then, Bill could still be seen in the audience for daytime sessions, usually in the front row of the old Embassy with his feet up on the radiator. In those days, films arrived in heavy cans from overseas and, despite the confidence projected in his erudite programme notes, Bill may not have actually seen every film he programmed.

At that time, the festival office was on the first floor of a Courtenay Place building but by the early 90s – I think – they had moved to the building on Cambridge Terrace that is now occupied by the X Base backpackers. Several storeys up, the festival office opened up to a roof terrace that felt terribly Manhattan-esque to me. Once again, I found myself thinking that Bill had the best job in the world.

By the early 2000s, I was on a different side of the fence. No longer media, I was running one of the festival’s key venues, the Paramount on Courtenay Place. We would make our auditorium available for Bill and his team to screen selection previews and, of course, I would often sit in. I recall coming out of one film – a Cole Porter biography starring Kevin Kline – and waiting for Bill’s verdict. “It’s a little clunky,” he said, and that word is now so deeply embedded in my film reviewer’s vocabulary that I have to consciously edit it out of everything I write for fear of overuse.

He was influential on me in other ways too. I loved and admired his approach to public speaking. While I can’t quite bring myself to leave pauses as pregnant as his, I do have confidence that not every space has to be filled with an ‘um’ or an ‘er’. Sometimes the silence is fine. He also did every audience the courtesy of introducing himself at the beginning of every speech – every single time. It’s an easy thing to forget if you think you are with a familiar crowd, but it demonstrated his humility and, once again, that sense that you can never take anything for granted in this world.

When I went back to the media and started trying to blag free tickets again – some things never change – I got an insight into how carefully he managed the festival’s reputation when I saw how he personally would suggest preview or screener titles to let me have, knowing how even that level of curation would help to avoid even the slightest risk of a bad review.

I’m pretty sure that no one would disagree with my assertion that Bill was the best writer on film in New Zealand. Like many others, I keep all my festival programmes because the writing is just so good. When the programme got too big for him to produce every capsule preview himself, Bill found lots of talented writers and coached them in his inimitable – and well-tested – style.

I was asked to write a preview once and was astonished to find that there wasn’t just a word count, there was a character count! And you had to produce three versions for the different sizes that a preview could appear. Knowing who my first reader was going to be made it the most intense writing gig I have ever had. When the finished piece appeared, I recognised very little of it, but it did, indeed, read a lot like Bill. I haven’t been asked back since.

More recently, as I’ve been contributing here and on the podcast Rancho Notorious, I found Bill to be more relaxed, happier to talk about his own life in film – I’d always found him to be pretty reticent about his personal life before then – and the cinema experiences that shaped him.

A deep and abiding love for Meet Me in St. Louis (starring Judy Garland) was revealed, for example, and one of my happiest memories was coaxing him to the Rancho Notorious studio at my house in Silverstream one Sunday morning to talk about the 2016 festival. We promised home baking and fresh coffee and it was a delight.

When Bill started as director of the film festival it was a glamorous gig – as I say, it was the best job in the world – but by the time he retired, it was a lot less fun. Selecting films nowadays often involves long hours on the laptop watching digitally watermarked screeners with your own name right in the middle of the screen. The production line requires two or three films a day, at least, and you have to kiss a lot of frogs before you find your prince.

I’m glad Bill got to experience the best of times in the job. He earned it.