Us is out on home video today. Dan Slevin looks at some of the critical responses to the ideas behind one of the most creative films of the past 10 years. 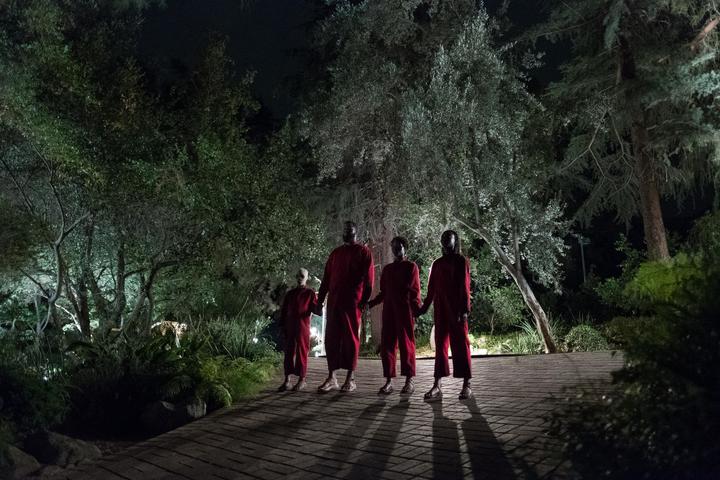 Jordan Peele’s ground-breaking modern horror Us arrived in cinema on 21 March and almost immediately it provoked a huge amount of analysis and comment. Rarely has a modern movie captured the imagination of critics, fans and cultural commentators so quickly, all trying to decode its “terrifying tapestry of symbolism” but also identify its place in the social and political spectrum of America in the second decade of the 21st century.

The story of an upper-middle class Black family, terrorised by four doppelgängers of themselves while on a vacation in Santa Cruz, caught the imagination and prompted some of the most thoughtful coverage I’ve seen in ages. With the home video version hitting VOS and stores today, I thought I’d collate some of the most interesting so you have some further reading available once you’ve seen it. And, yes, you should see it.

WARNING: These links will contain spoilers.

Esquire covered the film pretty well, even putting together a short video attempting to explain some of the main allusions in Peele’s film, but I was taken by this article about watching a horror film where, finally, the black characters weren’t disposable:

"I understand what he’s saying," said Hunt. "The message of the movie is not about race in the same way that Get Out was an exploration of racial politics in America. This film isn’t that." But, he added, "It's always about race." Us is a classic, bloody horror film, and effective scary movies do one better than inviting the audience to a walk in someone else's shoes—they invite you into someone else’s skin. In this case, that skin is black, which is pretty revolutionary.

Jason Parham for Wired Magazine also wrote about Black Horror but made the connection to Donald Glover’s series Atlanta which was full of the kind of dread that only people of colour in America experience:

When I consider What Black Horror Means Today, with the thick of the present around me and its propensity to so swiftly crush the soul into ash, I think of Atlanta, Glover’s twisted theater of kinship and chaos and black pathos. For two seasons, the FX drama has plunged into the bizarre, an experiment so agile and esoteric in purpose, so sharply Ellisonian, it was, at times, hard to understand it as anything other than straight-up horror. Like the best of the genre, Atlanta is a wounded animal. Because hasn’t black life always been an open wound? From the moment slave blood soaked the shores of Jamestown, it was a gash that wouldn’t close shut, that refused to heal. (The decision, it should be said, was never ours to make. The radical act of healing—to be whole and free—is, for black people, near impossible in a land built on the rejection of racial equilibrium.)

Early in the publicity campaign for Us, Peele said that his film wasn’t about race – a claim picked up by RNZ’s Simon Morris in his review – but several commentators have noted that it is impossible to separate race from the class questions that lie at the heart of the film. Evan Narcisse for io9 spoke to Peele about that:

I make it clear, as I’m sure you’ve heard, this movie is not about race, but there are so many ways in which America’s about race.

And this movie’s about America. So, when you look at what I’m doing with the racial tropes, I’m trying to bust out of those boxes and go the other way. 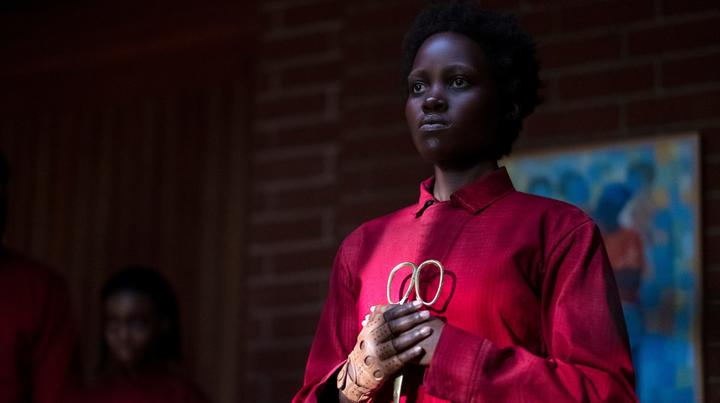 Writer-director Jordan Peele – who launched his career as horror auteur with the acclaimed Get Out in 2017 – went from Us to his reboot of The Twilight Zone (TVNZ On Demand) and this article by Aisha Harris in the New York Times finds the strands of inspiration that Peele found in Rod Serling’s classic series:

The twisted path that connects “The Twilight Zone” to “Us” leads most readily to the Season 1 episode “Mirror Image,” which Peele has cited as an inspiration for his film. In it, Millicent Barnes (Vera Miles) waits at a bus station, and realizes she has crossed paths with her doppelgänger. Only she can see the curious figure; no one else at the depot believes Millicent’s claim, and she slowly begins to unravel.

Brad Guillickson at Film School Rejects took a look at how a particular piece of kit could connect Us with the great horror movies of the past but also help Peele tell the story he wanted to tell in the present:

For Us, the split-focus diopter is not a nifty tip of the hat to the masters that came before (although it is that, too), but everything its filmmaker is screaming throughout the movie’s runtime. Here we meet Adelaide and Red on one battlefield, ravenous and furious to protect what they had. Two women enter, only one shall leave.

In the NY Times, Reggie Ugwu wondered how Lupita Nyong’o’s voice choices informed the characters that she played:

Working with the vocal coach Beth McGuire, who also worked with Nyong’o on “Black Panther” and the 2016 Broadway play “Eclipsed,” the actress took her real-world inspiration and suffused it with ghostly malevolence.

“Red’s character is very id-driven, so one of the things that we were looking for was for that to come across in the quality of her voice — just the raw emotion, the raw rage,” Nyong’o said.

And, back at Film School Rejects, Matthew Monagle attempts to untangle an ending that Peele has deliberately made as opaque as possible:

For Peele, the Hands Across America movement was the perfect encapsulation of a period in American history where our narratives of prosperity and equality were far outpaced by the horror of the real world. Some grew affluent, countless others suffered, but the idyllic stories of America flourished amidst all this civil unrest. This sets the stage for the duality of Us, where humans and their doppelgangers are forced into violent conflict across the streets of America. Our instinct is to side with the people most like us — the families living in beautiful houses and driving nice cars — but as the final scenes unfold and we realize that it is Red, not Adelaide, who belongs to this world, we are forced to question what it was about these two families that drew our affection in the first place. Why is one scary and the other familiar? It might come across as a Shyamalan-esque twist, but that presupposes that Peele was ever particularly coy with where his film was headed. This “twist” was always lurking in the background.

At Popmatters, Ryan Poll went deep on some of the cultural influences that Peele was working with, especially the idea of an “underground”:

The underground history referenced by the title card suggests a cultural network of underground narratives so prominent in African-American history, including the underground railroad, Ralph Ellison's Invisible Man (1952), Richard Wright's "The Man Who Lived Underground" (1961), Amiri Baraka's The System of Dante's Hell (1965), Thelonious Monk's Underground (1968), and Stefano Harney and Fred Moten's concept of "the under commons".

What is the story with the rabbits? Turns out that Peele just thinks they are creepy (but the connection with the shape of the scissors blows my mind):

The closest Peele has gotten to explaining the meaning of the rabbits is to point out how they fit with the film's greater theme.

“They’re an animal of duality. They’re adorable but they terrify me at the same time," he told The Guardian. "And they got those scissor-like ears that creep me out.”

Ah yes, those scissor-like ears absolutely fit with the Tethered's weapon of choice. But also, he's legitimately creeped out by rabbits.

At the Grapevine, Michael Harriot has had enough with all the overthinking – that trying to read too much into the subtext of the film is itself a form of racism:

However, the entirety of the hullabaloo surrounding a film that is either a biblical-level allegory of our nation’s psyche or, alternately, a pretty good flick about bashing the skulls of monsters with golf clubs, can be summed up in the beginning of the second act when Lupita Nyong’o’s character, Adelaide, says three words:

Perhaps no single sentence in recent cinema has been dissected as much in one week. Some film analysts hypothesize that the quote by Nyong’o’s character, Adelaide, challenged the notion of black “otherness.” Aside from their skin color, the Wilson family was a boilerplate American clan with two kids, a summer house and a brand new home. Even their names were unremarkably indistinct. Therefore, people who were intelligent enough to interpret Peele’s obvious allegory extruded multiple meanings from this line. 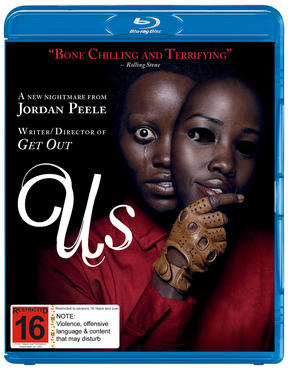 And finally, at Esquire once again, only Matt Miller (in an article about the importance of Jeremiah 11:11) makes the direct connection between the two letter title and the country the story is taking place in. I thought that was absolutely critical, to be honest.

It's also worth noting, if you didn't notice, that Us could also quite literally be U.S.

Us is released on home video (DVD, Blu-ray and VOD) on 3 July.