It’s been a frustrating time lately for the Wellington film industry. While the high-end has been twiddling its thumbs waiting for James Cameron to get to work on all the new Avatars, only one major local production has been completed here recently – Daffodils – and in that picture we were playing the part of Hamilton which is kind an insult to both places.

Recent arrival to Wellington, Chicago-born Ben Zolno, has stepped into the breach with his self-funded romantic-dramedy Status Pending and – while it is certainly a Wellington production – once again, the location could be a nondescript suburban house in any New Zealand city.

Like all great micro-budget films, Status Pending makes a virtue out of its necessity. The whole film is shot in one house and features only two main characters (and a couple of nice cameos). Zolno himself plays a similarly recent arrival to New Zealand, Ryan Nevins, a wanderer who has landed here with dreams of an internet-based travel startup. When the film opens, he is asleep in bed with his… girlfriend? Nope. Partner? Definitely not. Long-term Tinder fling? Possibly. Ivana Palezevic plays Lizzie and it’s clear in the early exchanges that they are both besotted with each other but also equally unwilling to put a name on what they have together (let alone a ring on it).

Realising that both flatmates are away and that they have the house to themselves, there is an opportunity to escape the confines of the bedroom for a while and discover a little bit more about each other. It’s been six months and, despite the mutual wariness around commitment, at some point in a relationship you have to decide what it is you are both doing.

With the lives of both protagonists amusingly – but carefully – filtered through the various social media platforms we have now, Status Pending has a suitably zeitgeisty feel although your enjoyment is likely depend on how fond you become of this couple in the early, wackier, exchanges. Luckily, their chemistry is good and Zolno’s choice to encourage (nay, require) plenty of improvisation around the scaffolding of his story helps deliver a relaxed feel. 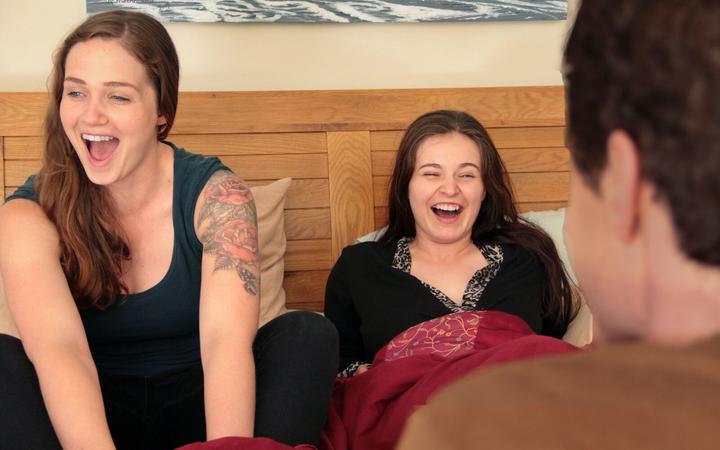 I was less convinced during the final third when the rom-com turns much more dramatic and perhaps this section of the film needs to be as ruthlessly edited as the first half. By the end I wasn’t sure that the film had earned any of the possible outcomes for these two and so it turned out.

Nevertheless, Status Pending asks a few questions about what commitment looks like in the modern age and provides a compelling blueprint for how not to achieve it.

Status Pending is receiving a premiere screening on Tuesday night (21 May 2019) at Wellington’s Embassy theatre as a kind of preview for the upcoming WLG-X multimedia festival which is on in September.