Review: The Ballad of Buster Scruggs

Review - I would imagine that the arrival of the first Coen Brothers’ film on Netflix is likely to generate a significantly different audience profile than they are used to. This may partly be the point. 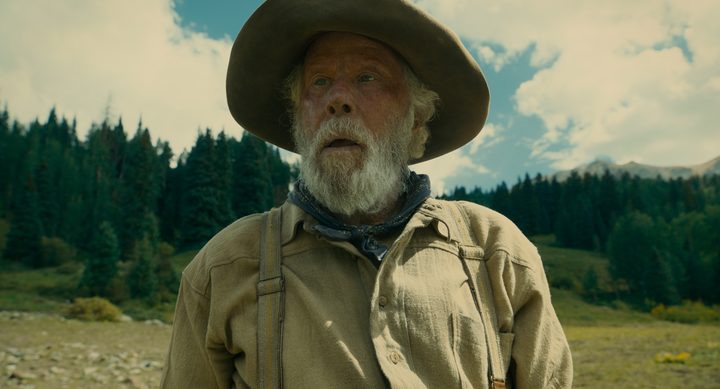 Tom Waits as the prospector in the segment “All Gold Canyon” in The Ballad of Buster Scruggs. Photo: Netflix

Netflix audiences are much more passive than the cinephiles who seek out specificity, the film fans who instinctively know what they want. This article, then, is for them. If you’ve never seen a Joel & Ethan Coen film before, why should you bother now?

The first reason why you should bother is that they are clever. Much cleverer than you are. Sometimes too clever by half. And there are two of them which means that cleverness is squared. It’s virtually impossible to take in all the cleverness in a Coens’ picture without either multiple viewings or some form of guide book. Many people find this rewarding. One example is O Brother, Where Art Thou? (2000) which relocates Homer’s Odyssey to the Depression-era Deep South.

Luckily, despite being dense with allusion, their films are usually pretty accessible. Sometimes their funnier films have very deep underlying themes – like Hail, Caesar (2016) – and their darker, more dramatic ones have a seam of dark humour running through them, so best come prepared.

Their Academy Award-winning No Country for Old Men (2007) was a bleak treatise on the inability of good men to defeat evil but at the same time was full of wry, dry wit. And when they do double down on comedy, they are usually extremely successful: Raising Arizona (1987) or Intolerable Cruelty (2003) come to mind.

Like all great auteurs, the pair have a singular world view and they are not as cynical as they may seem – on the surface. One critic has described their maxims thusly: “1) Selfish pursuits are a sure path to disaster; 2) Collateral damage is inevitable, and even the most righteous person can be a victim; 3) Selflessness is the best guard against misfortune.

Their latest film, The Ballad of Buster Scruggs, doesn’t contain too many characters for whom the word ‘selflessness’ might apply. It’s too busy telling the story of modern America – Capitalism! Exploitation! Guns! – through a lens of beloved Western cliché. Six stories, supposedly pulled from a dusty old book, each one celebrating some glorious trope of Western cinema and then proceeding to undermine it.

In episode one, Buster Scruggs (Tim Blake Nelson) is a singing cowboy, oozing affability in his white shirt. But he’s also a cold-blooded killer, a sharpshooter with a philosophical bent, un-surprised when the arms race he’s a part of gives him his wings. 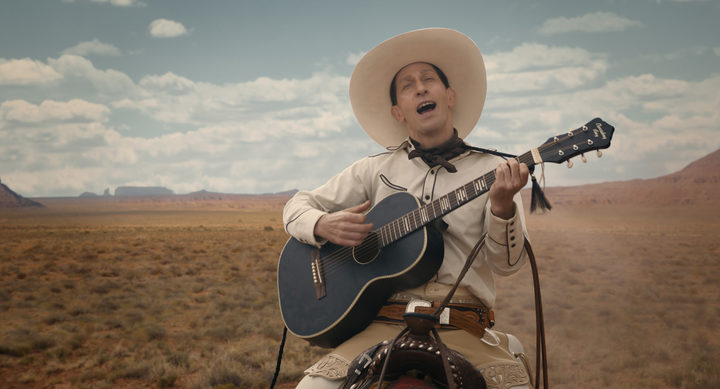 Death haunts episode two, “Near Algodones”, in which a cowboy (James Franco) fails to rob a bank. (One of many outstanding cameos is in this segment, from Stephen Root as the bank teller.) “Meal Ticket” is episode three, a desperately sad tale of entertainers eking out a meagre living traveling from snowy mining town to snowy mining town.

Tom Waits stars as a grizzled old prospector about to hit the motherlode in “All Gold Canyon” – episode four – and “The Girl Who Got Rattled” (episode five) is the strongest of all, not least because it puts a strong woman character at its core. Zoe Kazan plays a young woman who finds herself alone in a wagon train to Omaha to start a new life. Who will protect her now that her brother is dead? 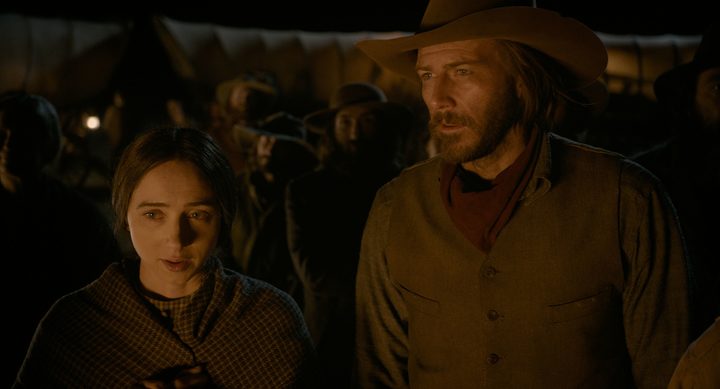 Zoe Kazan is Alice Longabaugh and Bill Heck is Billy Knapp in The Ballad of Buster Scruggs, a film by Joel and Ethan Coen. Photo: Netflix

The final episode, “The Mortal Remains”, features six strangers in a stagecoach, on a journey full of foreboding and allegory.

The Ballad of Buster Scruggs is another great Coens’ film. Unimpeachable in terms of craft (their mastery of period dialogue is next level), deep in terms of thinking. It’s political but not hectoring. And it’s worth a month’s subscription to Netflix on its own.

The Ballad of Buster Scruggs is on Netflix worldwide now.