Review: The Leftovers & The Young Pope 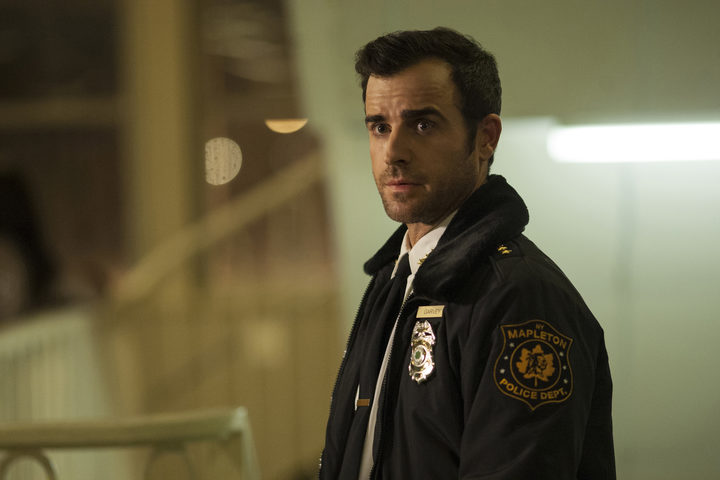 Updates have been thin on this page over the last few months, and for that I apologise. Big note projects like #50filmsbywomen and Sight & Sound’s 50 Greatest Films of All Time are lying unattended and, with less than three months left of the year, it appears unlikely that I’ll reach either of those 50 film goals. Still, hope springs eternal. Who knows?

The reasons for the delay are frustratingly personal. A family illness has meant prioritising the day job and family over almost everything else, not to mention prompting meditation on topics like death, suffering, grief, eternity, forgiveness and faith – heavy topics for a confirmed atheist such as myself.

I blame The Leftovers and The Young Pope, two recent TV series we watched at home while we were failing to muster the enthusiasm for going to the movies. We chose them because they were HBO productions – that seal of quality that gives us high production values like Game of Thrones but also first-rate dramas like The Wire. In my opinion, you can’t go far wrong if the HBO logo is on the tin.

The Leftovers was chosen by my wife – she’d already watched Season 1 last year and when I expressed an interest she gamely offered to watch it all over again so I could catch up. I was interested in The Young Pope from the day it was announced, mainly because of the presence of Italian maestro Paolo Sorrentino at the helm (Academy Award-winner for The Great Beauty and director of my favourite film of 2012, This Must Be the Place). Stylistically, they couldn’t be more different. The Leftovers is emotional and often wrenching. Hearts are on sleeves, characters spend much of the story teetering on the edge of reason. The Young Pope is cool, intellectual and often playful. It’s America vs. Europe. But they are also both about faith vs. reason, the unexplained and the inexplicable, what to hold on to when everything you know and trust disappears. 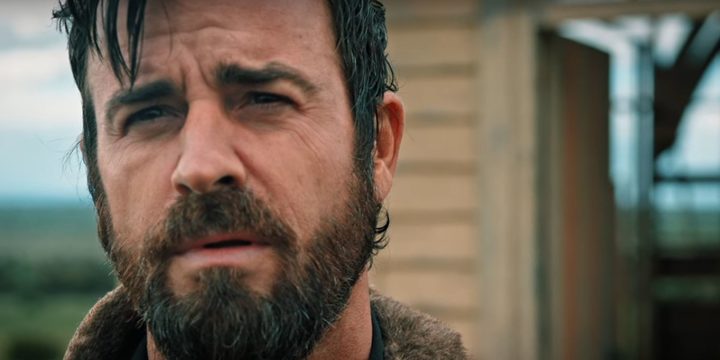 By Season 3 of The Leftovers, Garvey (Justin Theroux) and the rest of the cast have made it to Australia and the journey has taken its toll. Photo: HBO

Based on a book by Tom Perrotta, The Leftovers is set in small town America, three years after a mysterious event called “The Sudden Departure” in which 140 million people all over the world simply disappeared at the same instant. Two percent of the planet’s population. (Possibly not coincidentally, the same proportion that died during the flu epidemic after World War 1.)

As you can imagine, this has caused a great deal of grief, bitterness, anger and bewilderment, and – humans being humans – there are plenty of people who want to use the event to tell other people what they did wrong and what they need to do about it. The losses were not spread evenly. Nora Durst (Carrie Coon) lost her husband and two children. Kevin Garvey, Mapleton New York’s Chief of Police (played by Justin Theroux) lost the unborn child his wife (Amy Brenneman) was carrying, although he doesn’t know anything about it. The small town of Jarden, Texas, was the only community on Earth to lose no one and in Season 2 has to build a fence to keep out all the desperate people who think the town’s waters can save them from the next unknowable catastrophe.

And then there are the Guilty Remnant, a cult formed from unimaginable grief. Silent, chain-smoking, dressed in white, they haunt the living, reminding them of their loss, not allowing anyone to settle into a new normal – not that anyone seems likely to. 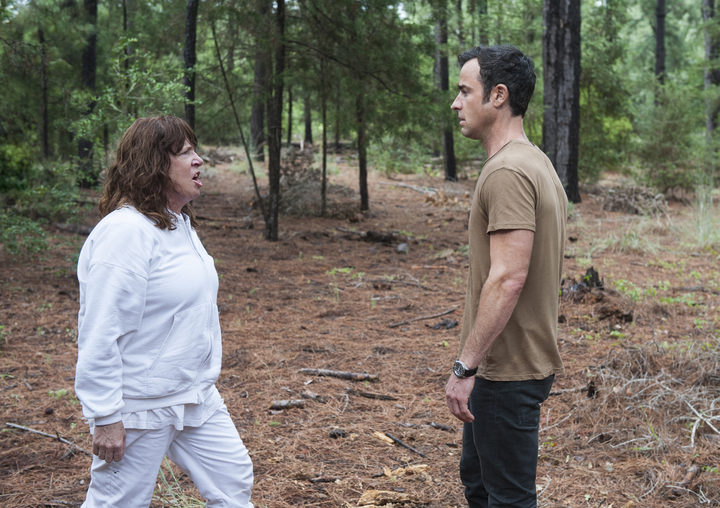 The Guilty Remnant are led by the wonderful Ann Dowd. Here she uncharacteristically verbally gives Garvey (Justin Theroux) a piece of her mind. Photo: HBO

It’s a world where science has no answers, and where belief in the metaphysical seems as reasonable as any other explanation. And the metaphysical answers back. Characters die and come back to life. Other characters have the gift of second sight or healing touch. Unexplained power is all around us but provides no answers and appears to have no moral guidance to offer – just the lesson that there is something bigger than us out there and that it doesn’t appear to give much of a stuff about us.

In Season 3, all the remaining main characters end up in Australia, for some reason. The seventh anniversary of the Departure seems to presage something worse – maybe the end of the world – and the mysteries continue to deepen including meeting an Australian former-athlete and radio talk show host (Bill Camp) who now thinks he is God and who are we to doubt him?

If, like me, you’ve been suffering from post-9/11 anxiety for over 16 years, made worse by the current geo-political shambles and random climate catastrophes, you’ll find The Leftovers gripping, disturbing and pretty close to the bone. Stick with Theroux, the lead guy. He’s frustrating at first but you eventually realise he’s making some brave choices that eventually pay off. 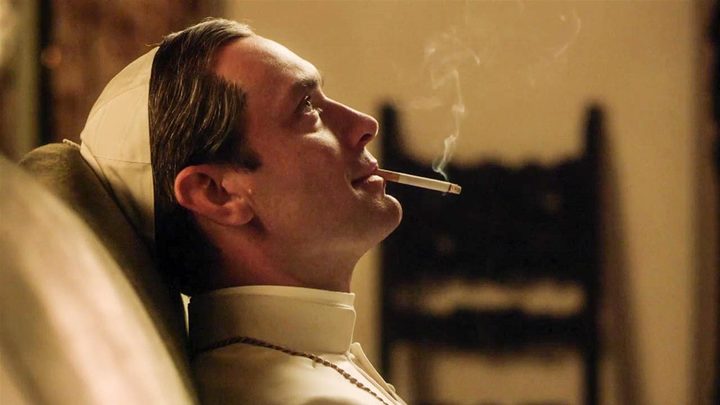 Jude Law has never been better than as Lenny Belardo, The Young Pope. Photo: HBO

Jude Law is a different kind of leading man in Sorrentino’s The Young Pope. Protégé of hard-line Archbishop of New York, James Cromwell, he is (somewhat accidentally) elected Pope instead of his mentor, causing no end of personal friction between them. You might expect that Law’s Lenny would become a progressive young people’s pope but instead he is revealed to be a hardliner, shunning publicity and compromise equally. The shifty politicians of the Vatican, used to getting their own way, don’t know what to make of him.

As the series progresses, we realise that Lenny’s stridency masks a paralysing lack of faith. He’s over-compensating. Except amazing things are happening and he may be causing them. Unlike many TV series, The Young Pope is fully in the hands of its creator, Paolo Sorrentino. He directs every episode and his trademark whimsy is often on display, as well as his contempt for the corruption and cynicism of the church. A kangaroo – a gift from the Australian government on his ascension – wanders the Pope’s private gardens, occasionally appearing as a kind of bouncy non-sequitur to remind us of the essential absurdity of the whole exercise.

MVP (as they say) is the brilliant Diane Keaton as the nun who raised the orphan Lenny and who is now the young pontiff’s spiritual advisor and political enforcer. A role worthy of her powers. 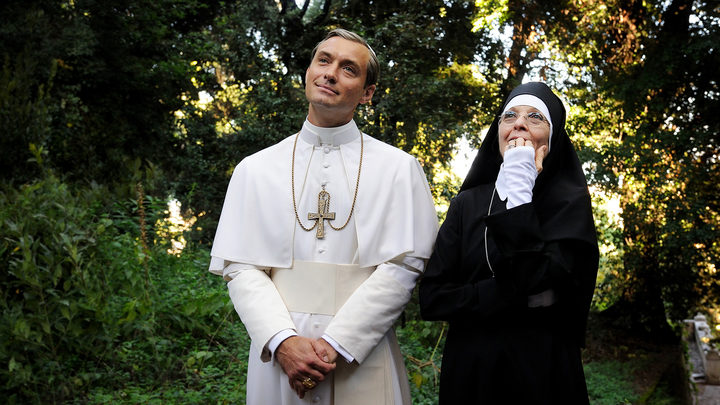 Seasons 1 and 2 of The Leftovers are available on DVD/Blu-ray (RRP $28.98 and $34.99 respectively) and Season 3 is still available to Sky subscribers via Sky Go. The Young Pope is on DVD (not Blu-ray) and also available via Sky’s Neon service. Here is your periodic reminder that Apple’s iTunes store in New Zealand does not rent or sell TV series.