In this new series, Dan Slevin looks at the best films ever made (according to Sight & Sound magazine).

First up, at number 50, one of the most influential and visionary science-fiction films of all time, La Jetée. 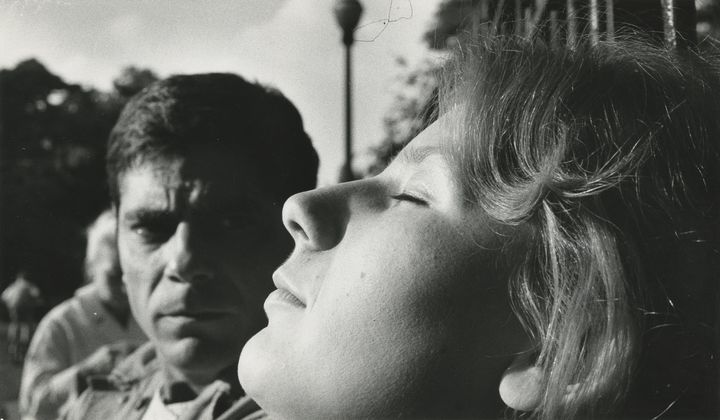 Nowadays, a film of less than 30 minutes wouldn’t make it into anyone’s canon. Shorts are ghettoised into sub-programmes of festivals or their own dedicated events. There’s no room for them on television. Cinemas won’t play them because they take up precious advertising time. Thus, Chris Marker’s La Jetée is something pretty special.

It’s also one of the most unusual and influential films ever made; so experimental, in fact, that no-one has ever really tried to use the form again but so influential that we have been seeing versions of the story ever since.

Marker was a mysterious French experimental filmmaker and multimedia artist who hung out with the likes of Resnais, Varda and Duras. The look of La Jetée is inspired by the popular photo romances of the time – comic books illustrated by still photographs. La Jetée is composed of filmed still photos (shots of varying length like a normal motion picture) except for one breath-taking moment of filmed movement, a beautiful surprise and then it’s gone.

We are in a post-apocalyptic Paris. A man is sent back in time to try and warn the past about what is to happen. He falls in love with a beautiful girl who he remembers from his pre-war childhood (on the eponymous viewing deck at Orly Airport) where he watched a man shot and killed. 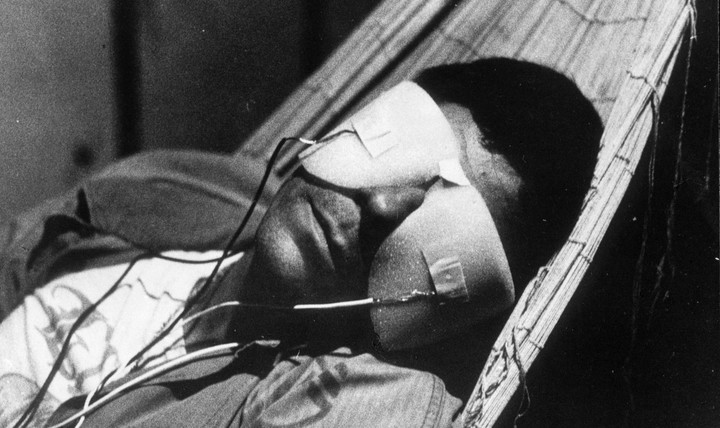 Davos Hanich as “The Man” prepares to be sent back in time. Photo: Criterion

With the help of people from the future, his mission is accomplished and he understands that he is now surplus to present-day requirements. Instead of execution, he chooses to be sent back to that day at Orly, to try and find the woman again, only to discover that the man who died on the pier was to be himself, a loose end to be tidied up by the scientists who had sent him through time in the first place.

If this plot seems familiar, you’re right. La Jetée was remade by Terry Gilliam in 1995 as 12 Monkeys (itself spun off into a SyFy Channel series currently screening in the US). The still image style, however, has been less influential, perhaps because anyone trying it can only have been riffing on one film – which makes it homage, like this video by Sigue Sigue Sputnik from 1989.

But the most startling thing about re-watching La Jetée, thirty years after my last viewing, was realising the deep connection (and inspiration) it has with the number one film in the Sight & Sound list, Vertigo. It turns out Marker was obsessed with Hitchcock’s film, watching it over 30 times, and shots and images from the earlier picture slip easily in to a film that on the surface couldn’t be more different.

This video ties the three films (Vertigo, La Jetée and 12 Monkeys) together to show one of the bits of connective tissue but there are others.

And that’s why it is so important to see and appreciate these films from the canon (and many others). Films don’t exist in isolation; they are influenced by their predecessors and go on to influence others. The film experience is so much richer the more you know. I was surprised that my very first stop on the Sight & Sound Top 50 journey would immediately lead me to the final stop and then back again. I can’t wait to see where we go next.

La Jetée is currently out of print on New Zealand home video but can be rented (on a disc that also contains Marker’s 1983 documentary Sans Soleil which features his obsession with Vertigo) from Fatso and Aro Street Video. Viewers with DVD/Blu-ray players that can play different zones are recommended to buy the Criterion Collection edition which is full of enticing extras.

Every ten years Sight & Sound magazine (published by the British Film Institute) surveys international critics and filmmakers to come up with a ranking of the best films ever made.

The last list came out in 2012 and surprised many by electing a new supreme leader. Alfred Hitchcock’s psychological thriller Vertigo took the number one slot over Orson Welles’ 1941 debut Citizen Kane, which topped the list for so long that it had become something of a cliché.

Regular listeners to my Tuesday afternoon slot on Jesse Mulligan 1-4 will know that encouraging the appreciation of great (old) films is a passion of mine and that I have grave concerns about the quality of film literacy and appreciation (especially if these films are only going to be watched by scholars and film geeks). Indeed, the availability of some of these titles in New Zealand is so poor they may as well have dropped off the radar entirely.

So, this is a project to try and raise the profile of these movies a bit; rescue them from either obscurity, cliché, or both, and encourage viewers to seek them out. There are 52 films in the top 50 (due to a couple of ties in the voting) which means I get to watch and write about one a week during 2017. A pleasingly closed project.

Sight & Sound Top 50 encourages us to pay more attention to the greatest films of the past. In the same way we still read old books and listen to old music, we should be appreciating old movies, Dan says.