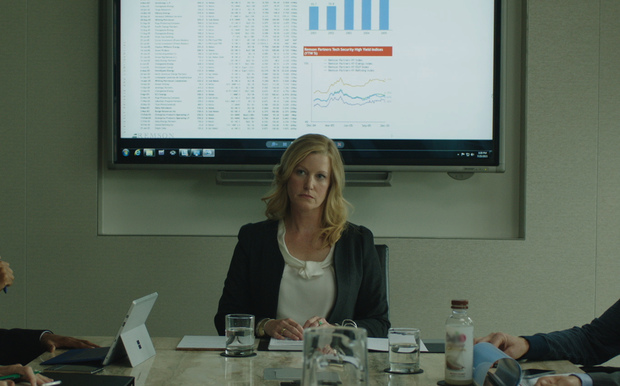 After the disappointment of Sunset Song earlier this week, I'm pleased that things got back on track fairly quickly.

Meera Menon’s Equity is rather more successful, merging two genres to considerable success: the ‘woman on the corporate ladder’ film featuring the usual injustices, indignities and frustrations and ‘high finance thriller’ best exemplified recently by J.C. Chandor’s Margin Call. It’s fantastic to see Anna Gunn, so reliably good in Breaking Bad for so long, carry a lead role and carry it she does.

Budget constraints limit the ambition a bit – and the occasional use of stock footage stick out – but its thesis is strong: how can anyone expect gender equality on Wall Street when the guiding and corrupt philosophy is “every man for himself”? 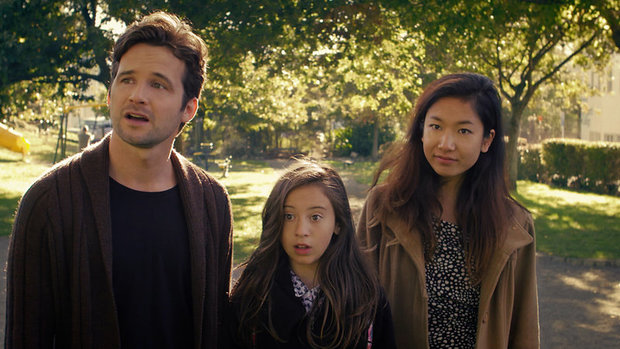 Full disclosure: I have known (and enjoyed the company of) Chronosthesia’s writer-director for nearly ten years and the film festival management asked me to host the world premiere of this ambitious locally-produced gem.

So, with that in mind, I’m relieved that it was a fun screening of a good and clever film on an auspicious night for a talented and engaging young hyphenate named Hayden J. Weal (I hope the pretentious Cecil B. De Mille middle initial affectation gets put to one side before the next one, H.J.).

A Wellington barista (played by an ingratiating Weal himself) meets and falls in love with a young therapist while simultaneously receiving disturbing messages from the future. The picture doesn’t look like a micro-budget story shot with mates over a summer’s worth of weekends but occasionally it sounds like it.

Weal directs himself with a light touch that suits his easy presence and the rest of the cast vary between good and excellent. Special mention to veteran Ralph Johnson (who hasn’t always been well served by local films), scene-stealing Lyndee-Jane Rutherford and especially Cohen Holloway as the mentally disturbed man who may be the key to the mystery.

Don’t expect too many opportunities to see this as Weal, I think, would prefer to work on his next project than spend a year hawking this one thanklessly through local cinemas as some filmmakers often end up doing.

Back in 2005 my pre-film critic mind was blown by a Romanian picture called The Death of Mr Lazarescu when it played at the film festival. At the time, Romanian cinema wasn’t much to write home about but since then their New Wave has produced some stone cold classics, all betraying some wider European influences but still being uniquely Romanian at the same time.

Cristi Puiu made Mr Lazarescu and Sieranevada is the first of his films that I’ve seen since then – a lengthy, almost real-time, afternoon and evening with a Bucharest family gathered for the memorial of the family patriarch (centred around the unusual ritual of one of the sons being formally invited to the dinner table wearing one of the old man’s suits). Before we can get that far, however, there’s political discussion including some ridiculous conspiracy theories (“Look it up, Google it!” one character says after every bizarre assertion), arguments, accusations, disappointment, revelations and a brother-in-law who won’t leave, virtually all taking place in the confines of a tiny book-filled apartment.

Not just an acting masterclass from the entire ensemble, Sieranevada is a brilliant sketch of a family that probably shouldn’t get together too often as well as a modern-day Bucharest, full of European and international consumer brands while still holding on to some of the old ways.

I’ve not seen any explanation of the title yet and am curious, so help a brother out. 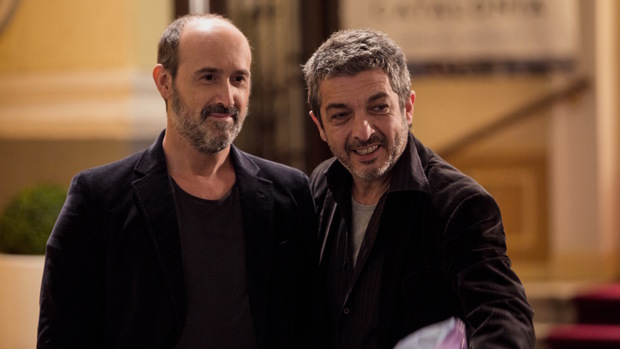 Easier to follow, more traditionally crowd-pleasing, Truman is a vehicle for one of Spain’s biggest stars (Javier Cámara who Almodóvar fans will instantly recognise) and Argentina’s biggest male star Ricardo Darín (The Secret in Their Eyes). These two middle-aged guys are old friends, despite Cámara’s character now living in Canada.

When Darín announces that he has terminal cancer Cámara returns to Madrid to see his pal one last time, except that the rogue-ish patient has plans of his own. Male friendship is an oft-tilled piece of soil but rarely with this much care. The two lead actors are most expressive in the eye department, showing beautiful amounts of love (and occasionally in the case of Cámara, frustration) for each other.

There are a couple of gentle twists that serve to reveal layers of character rather than provide “Gotcha!” moments but the film itself struggles to be all that memorable alongside the kind of company it is keeping in this year’s event.

The New Zealand International Film Festival continues in Wellington until Sunday 7 August and in other centres until 18 September. Catch up with part one and part two of Dan’s NZIFF diaries.