Widescreen’s best of the web (24 June)

Our pick of the best* and most interesting screen-related articles and features from around the web – special close reading edition.

First up, Abbey Bender for Brooklyn magazine describes French director Eric Rohmer (Claire’s Knee, Pauline at the Beach) as “the auteur of swimsuits” in her exhaustive survey of the beachwear in his many films from the 60s to the 90s:

These swimsuits are ideal signifiers of sun-dappled sensuality. The colors are soft, blending with Almendros’ cinematography, and they are cut low, revealing lithe bodies that provoke men into moral questioning while the women keep their agency. Rohmer swimsuits often embrace imperfection. The orange bikini bottom in La Collectioneuse bunches slightly, and the bikini that Haydée (Haydée Politoff) wears in the film’s opening rides up and twists in the back. In the world of Rohmer such imperfections add a down-to-earth allure. 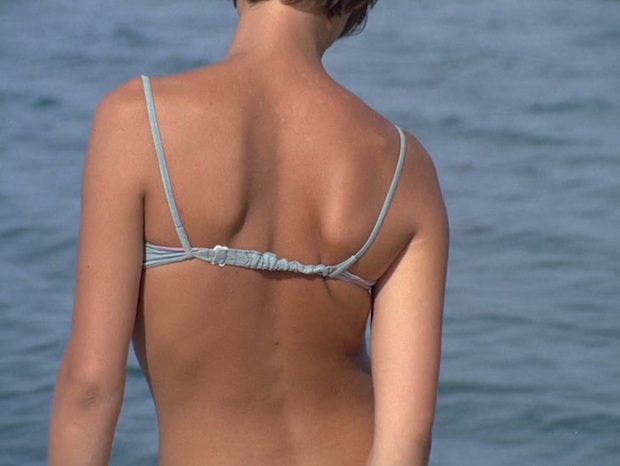 Periodically, Dave Addey takes a close look at the typography used in particular films – fonts, kerning, idiosyncrasies, etc. – but he has outdone himself with this forensic and very funny examination of Blade Runner:

The Spinner’s landscape-orientation TV shows a display that may be familiar to regular TITF readers:

This ENVIRON CTR PURGE display is identical to the one we saw in Alien, just before the Nostromo exploded :

As if that wasn’t enough self-plagiarism, Ridley Scott also steals a second display from his earlier sci-fi masterpiece:

…which the more observant of you may recognize as Alien’s shuttle disconnect sequence:

Perhaps most importantly of all, however, Gaff’s Spinner features Blade Runner’s only reported instance of Eurostile Bold Extended, brought to you by the letters C, A, U, T, I, O, and N:

The recent passing of Muhammad Ali provoked Bilge Ebiri of Village Voice to reassess Michael Mann’s 2001 biopic of the champ, starring Will Smith in his first real dramatic role, and what a reassessment it is:

Even those unimpressed with Mann's film generally admit that it has two brilliant sections — that opening Sam Cooke medley and a later lengthy scene of Ali jogging before his fight in Kinshasa, Zaire, as he's slowly encircled by throngs of people who chant, "Ali bumaye!" ("Ali, kill him!"). These sequences are two sides of the same coin: If that opening montage shows how Ali processed the anger of the world around him into something poetic and bitterly playful, the later one shows the complicated swirl of emotions emerging from the love and affection of the masses who idolized him. The jogging scenes are not jubilant, despite the cheering Africans surrounding the boxer. When Ali comes upon a rough wall-drawing depicting him as a larger-than-life figure — shown taking down everything from Foreman to military jets — there's a clear disconnect between the man and the myth. That image is an ideal to which he knows he will never live up, but he's clearly moved and awed by it. There's a profound loneliness to Ali at this point, and it's carried through to the final fight with Foreman.

It’s just a shame that Ali isn’t more widely available on home video in New Zealand or, heaven forbid, re-released to theatres like the USA.

Finally, Justine Smith at Vague Visages has been reassessing the work of New Zealand-born director Jane Campion and her latest article is about An Angel at My Table:

Campion’s filmmaking represents, in equal measure, the struggle of being an artist and the precarious artificiality of the art world. The artists that Janet encounters are no more noble or open than her family members or professors who insist they having her best interest in mind. The constant pleas for her to get a real job, and the implication that she just be “normal,” weighs on her. Janet Frame doesn’t quite fit in, as her goals don’t align with what is expected of women. As much as people put her down, the reason can only be that she poses a threat to their own self-value and the fragile pillars of society itself. With a condescending tone, people string Janet along by a fishing line, cradling her out of insincere compassion. Men, in particular, treat her as a pet, a creature and an object to be played with and eventually discarded: they resent her success but especially her talent.

[*May not be the actual best. We haven’t read the entire internet.]