Review: Eye in the Sky

Eye in the Sky gives our leaders – and those who fight for them – the benefit of the doubt regarding their intentions, even as it breathlessly interrogates their consciences. 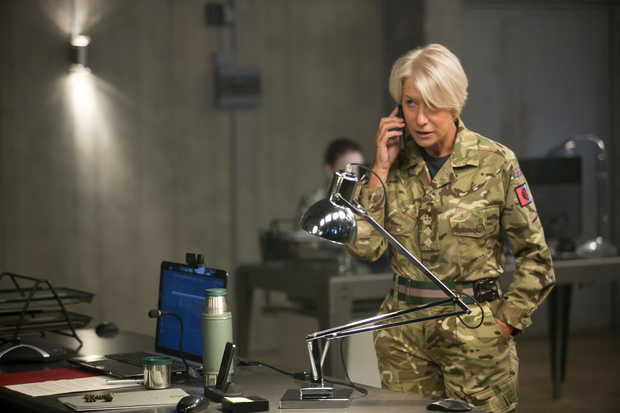 Since 2004 the nature of warfare, at least the way it is conducted by the Western powers, has changed dramatically. The War on Terror (and its siblings and successors) is now mainly prosecuted by remote control – drones hovering thousands of metres above their targets, piloted from thousands of kilometres away.

At the beginning of this year, the New York Times estimated that President Obama has authorised over 500 strikes using remote-piloted aircraft. And those are just the missions where a drone pilot has pulled a trigger. In Gavin Hood’s often gripping thriller Eye in the Sky, a US drone over Nairobi, piloted from Nevada with video footage analysed in real-time from Hawaii, managed by a British team in the Home Counties and supervised at Whitehall, has an intelligence mission: Identify Islamic extremist targets in a suburban house so that local forces can capture them.

But, plans change and missions creep. The targets move to where the local military can’t follow. The discovery of explosive suicide vests in the new location adds urgency to the film’s key moral and legal question – can the hovering drone be used to ‘terminate’ the targets before those vests are detonated somewhere more public? Can the likelihood of a few innocent civilian casualties (including a young girl selling bread beside the house) be balanced against the potential bloodshed caused by suicide bombings in crowded markets or shopping malls.

The film prosecutes both sides of this argument equitably (and repeatedly). While the clock ticks, Helen Mirren (as a driven British Colonel with a target in her sights) and the late Alan Rickman (as a droll but insistent General) try to get the politicians in the room – and around the world – to see beyond the next round of opinion polls. The politicians are often portrayed as if they lack internal fortitude: Jeremy Northam’s Defence Minister flusters sweatily while his boss, the Foreign Secretary (Iain Glen) suffers embarrassing gastric distress. 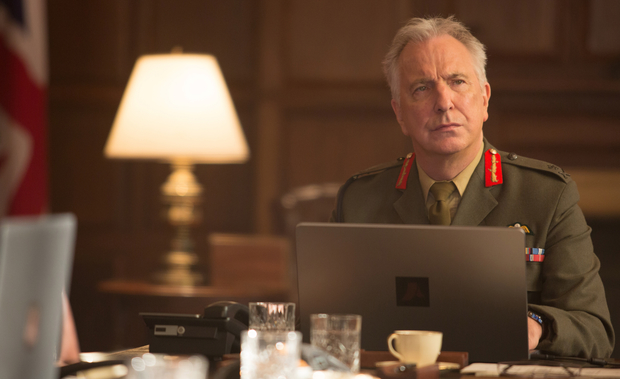 Meanwhile, in a high-tech shipping container outside Las Vegas, the drone pilot (Aaron Paul) and his spotter (Phoebe Fox) undergo a moral crisis of their own as the little girl (Aisha Takow) innocently refuses to leave the blast radius. Guy Hibbert’s screenplay pointedly makes clear that this intelligent and lively child might point the way towards a positive future for the Horn of Africa, if only she’s would be allowed to survive the day.

All of the characters desperately want to do the right thing by us – the people they represent – as well as the local population, and it would be nice to think, wouldn’t it, that every single one of the hundreds of real drone executions had been met with the same collection of consciences holding up under pressure.

In order to give every party a say – or in the case of the lower ranks, an opportunity to express their distaste via a shifty side-eye – the film outstays its welcome a little, but the intelligence of the debate and the tension of the deadline make Eye in the Sky one of the smartest films of the year.

More on Eye in the Sky

Simon Morris does the same for At the Movies: