Widescreen’s best of the web (5 April) 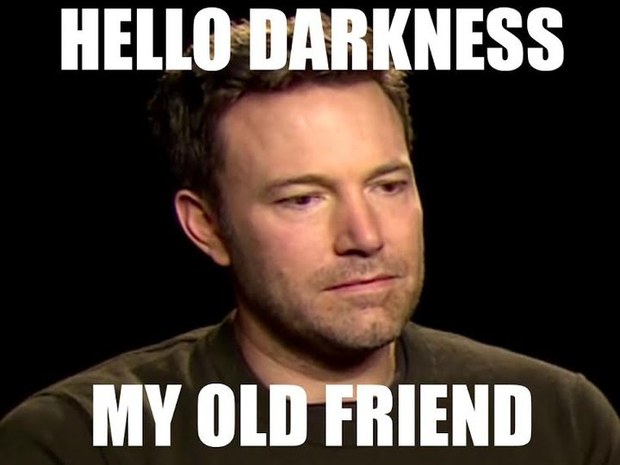 With box office for Batman v Superman dropping off a cliff, glum Ben Affleck’s gloominess can only intensify. Here’s a terrific Buzzfeed biography of the would-be Bruce Wayne and his conflicted relationship with class, what Ann Helen Petersen describes as his “oscillation between class anxiety and class capitulation”:

"As Affleck’s halo of shame receded, his likability increased. He was humble and tragic in Hollywoodland, was easy to root for as the director of Gone Baby Gone, and gave a completely unflashy performance in Argo. He’d found his low-key niche — the one, back in the early 2000s, he’d dreamed of. But something happened in the aftermath — as if he’d forgotten the lessons of a decade before. He seemed cocksure, arrogant; he was gambling and fighting constant rumors of infidelity, specifically with Gone Girl co-star Emily Ratajkowski. He’s great in Gone Girl not because he’d returned to the gleeful doofiness of Chasing Amy and Shakespeare in Love, but because the doof had grown up, soured, turned on itself. “He’s perfect in Gone Girl,” a friend told me, “because that movie knows he’s trash.”

Meanwhile, all this Bat-tention has resulted in Glen Weldon at Slate producing the definitive investigation of the gay subtext that surrounds Batman (and Robin):

"You’ve heard the gags, we all have. Slurs, cheap puns, and innuendo have dogged Bruce and Dick’s partnership from the moment it began in 1940. The editorially mandated addition of Robin the Boy Wonder—the first kid sidekick in comics—occurred less than one year after Batman’s debut, and it accomplished several things at once. It lightened the comic’s tone, a necessary move as the Caped Crusader was developing a reputation for murdering the bad guy; his publisher worried that parents’ groups would object. It also gave Batman—who was and remains, beneath all that bat-themed fetishist folderol, a detective in the Sherlock Holmes mode—a loyal Watson to whom he could explain his leaps of deductive reasoning. In giving Batman someone to care about, it raised the stakes. Most importantly, perhaps, it doubled the comic’s sales."

Marlon Brando would have celebrated his 92nd birthday on Sunday (had he lived) and the actor is still generating column inches. Sheila O’Malley writes an appreciation of Brando’s acting on her blog, paying special attention to the famous taxi scene in On the Waterfront:

"In terms of the moment when Rod Steiger pulls the gun on him: the way it was written was to have Brando be shocked and frightened, and say his lines from a panicked emotional “don’t shoot me” state. Brando knew it was wrong. He couldn’t say why. His understanding of acting was not a verbal one (although he could be extremely articulate about character development and script analysis. Listen to some of the things he said about Stanley Kowalski. He had thought about this shit.) Brando tried to express his issues with the gun-moment in Waterfront to Kazan before shooting. “If my brother pulled a gun on me … I wouldn’t be like this … ” He couldn’t express his feelings about it, he just knew it wasn’t real. Kazan said, “Okay – so show me how you would do it.” They played the scene. Steiger pulled the gun. And Brando’s response, now an indelible moment in American cinema, flowed out naturally. His sorrowful look, the gentle “shame on you” glance he gives his brother, the regret, shaking his head, putting his hand on the gun, gentle, gentle, like, “No, no, you’re my brother … no … this isn’t you …” Brando always chose relationship over abstraction and that stunning moment is the best example I can think of of his sense of emotional truth. Directors who didn’t trust him in that way, who didn’t trust that he knew more about emotional truth than they did, were in for a tough time with him."

Finally, for Roger Ebert’s site, Carrie Rickey pens a memoir of film study and appreciation that is also a history of how American cinema reduced the influence of women, eventually prioritising the “raging bulls” of the film school graduates that would dictate Hollywood’s future destiny:

"I go to the MoMA library. I learn that in the silent era there are many female filmmakers and screenwriters and that from the 1920s through 1950s, actors and actresses are equal draws. I learn that in the 1930s and 1940s each studio has female screenwriters to create female characters. According to the Quigley annual list of top box office stars in 1932, five of the top ten are women. (Marie Dressler, Janet Gaynor, Joan Crawford, Greta Garbo and Norma Shearer). In 1936, 4 ½ out of the top ten are women (Astaire/Rogers share a slot). In 1946, four out of ten. In 1956, only two—Marilyn Monroe and Kim Novak—on a list of seasoned actors like Cary Grant and Clark Gable. In 1966, three actresses. In 1976, only one: Tatum O'Neal."