10 Cloverfield Lane is that rare beast – a Hollywood film made for audiences rather than target markets. 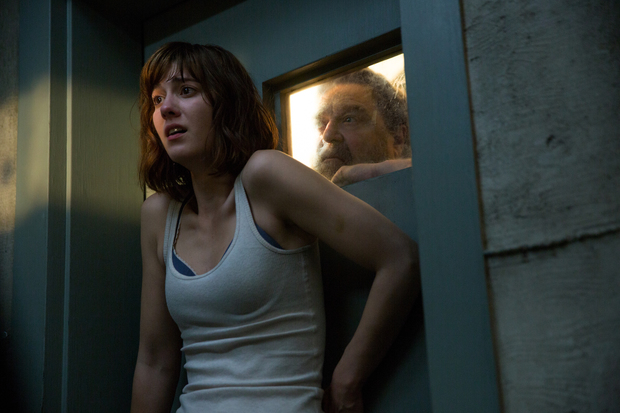 “We’ll sell you a seat, but you’re only going to need the edge of it!”

I was reminded of this paragon of movie marketing hype while I was, in fact, being pinned back in my seat by 10 Cloverfield Lane. A deliciously clever combination of thriller genres, it escalates elegantly before reaching a triumphant climax which would have provoked cheers from my audience if we could have summoned the breath.

Ostensibly, this is a companion to 2007’s alien invasion movie Cloverfield, a film this reviewer was less than fond of due to motion sickness induced by Matt Reeves’ constantly moving camera and a deep-seated antipathy to the lazy and illogical first person ‘found footage’ genre. But the subtle way the connections are made here reveal a rare respect for its viewers. In fact, I’ll take it further. 10 Cloverfield Lane is a film that is made for audiences rather than a target market.

We open on Michelle (Mary Elizabeth Winstead) hastily packing to leave her New Orleans apartment. On the road north, she avoids desperate calls from her jilted boyfriend and then – Boom! She’s off the road and unconscious, waking in her underwear, chained to a pipe in a concrete room. Creepy Howard (the great John Goodman) arrives to deliver food and tell her that there’s no point trying to escape… but not much else. So, she tries to escape.

A couple of attempts later and Howard, resigned, lets a little more slip. There’s been some kind of attack and they have retreated to an underground bunker he had been preparing for years. Also sharing the dwindling supplies is local boy, Emmett (John Gallagher Jr.), who helped Howard build the facility and knew where to head when the skies changed colour and the power went out.

They are stuck together, literally waiting for the air to clear, but Michelle still needs convincing. As Howard becomes less and less hinged, she is desperate to find out what’s going on above them – and whether the sounds she can hear above her are friend or foe.

That’s where plot summary must stop and gushing enthusiasm begins. First time director Dan Trachtenberg along with writers Josh Campbell, Matthew Stuecken and Damien Chazelle (a ring-in most famous for his Oscar-nominated debut Whiplash) have made something remarkable – a film that genuinely transcends genre. Or rather has absorbed all of them like an alien parasite, only to spit them back out again, one by one.

Winstead comes across as the heir-apparent to the Queen of Action, Sigourney Weaver. Determined and resourceful, we don’t need to hear yards of back story to know who she is.

If you’re one of those people who actually goes to the cinema to be entertained rather than stare at your phone or talk to your mate, you shouldn’t go too go far past 10 Cloverfield Lane.