Grimsby is another of Sacha Baron Cohen’s bait-and-switch comedies: if you can survive the (very) bad taste you get to see how big his heart is. 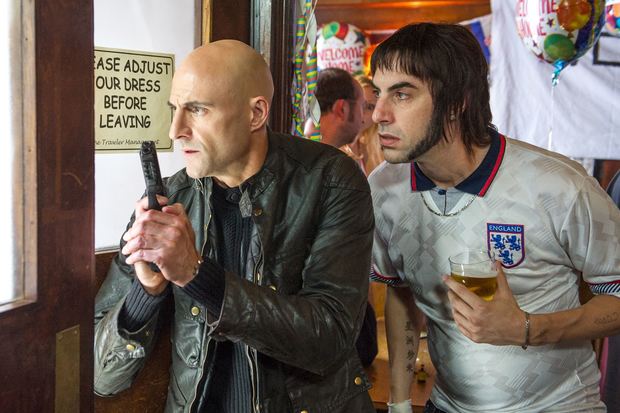 Mark Strong and Sacha Baron Cohen are a secret agent and his working class brother in Grimsby Photo: Roadshow

Almost 20 years ago, I stood outside Wellington’s Paramount Theatre after a successful opening weekend screening of The Castle, a film I was confident would soon become a dead-set Aussie classic. Beside me, a well-heeled Wellington cinemagoer complained loudly that, in her opinion, the film was unbearably patronising towards its characters (an unsophisticated working class Melbourne family struggling to stay in a home threatened by an airport runway extension). We were just laughing at their awfulness, she said.

And a more complete misreading of a film you would be hard to come by.

Rob Sitch, and his collaborators on The Castle, loved those characters. They affectionately represented real Australia, far better than a mythologised outback or a shaggy dog story. The Kerrigans loved each other (through thick and thin) and loved life even if their understanding of what ‘serenity’ was might have been different to yours or mine.

I was reminded of that little piece of eavesdropping while watching Grimsby, the latest ‘outrageous’ comedy from Borat and Brüno’s Sacha Baron Cohen. In it, a defiantly working class (or non-working class as he appears to have no job and be fairly reliant on dubious welfare arrangements in order to feed his nine kids), football-loving young man (Baron Cohen) reunites with his long lost brother (Mark Strong) who, since they were separated by a heartless orphanage 28 years earlier, has gone on to a stellar career in Britain’s most secret spy agency.

Cohen’s Nobby – beer gut and English soccer shirt, Noel Gallagher sideburns, indefatigable bonhomie – of course manages to derail brother Sebastian’s latest mission and when the baldy Bond is disavowed by his boss (Ian McShane) they both have to return to the rundown fishing port of their youth to hide out.

But not for long though, because Nobby’s pub mates can’t keep a secret, and when a psychopathic Establishment hitman called Chilcott comes calling our dubious duo have to go on the offensive – and when I say offensive, I mean really offensive.

I have never seen so much, how can I put this, biological output in a single motion picture (most of it elephantine). This is Baron Cohen’s schtick – the bait and switch from the most questionable of content, pushing viewers to the limit and beyond, only to reveal a soft centre by the end. The Dictator (2012) looked like a risible racist stereotype, full of off-colour jokes about terrorism and tyranny, until a closing speech about, well, dictatorship squared the circle by comparing Middle East despots with the secret autocracy we labour under in the west (“You can use the media to scare the people into supporting policies which are against their interests!”).

A pal of mine on Twitter described Grimsby as the anti-Kingsman. In that film, Matthew Vaughan fetishised the upper classes, expecting that his audience to fawn over the excess and admire the authoritarianism. Grimsby suggests that working class people might have no taste but they’re genuine, they’re loyal and they’re decent. Even when they are being indecent.

(Parenthetically, I suspect that Grimsby is the only film to feature two Academy Award Nominated Actors of Colour. It's great to see Barkhad Abdi (Captain Phillips) and Gabourey Sidibe (Precious) on the big screen again, no matter how undignified.)

Seeing as my alarm had gone off at 4.45am in order to watch an English football match, it may have been the perfect day for a sleep-deprived reviewer to watch a film that climaxes at a thinly disguised World Cup Final. Be that as it may, I think my enjoyment of Grimsby was genuine, even though I’m going to have to insist that nobody I care about ever watches it, even accidentally.

Four stars from Peter Calder in the Herald.

But only two from Sarah Watt in the Sunday Star-Times and Liam Maguren at Flicks.