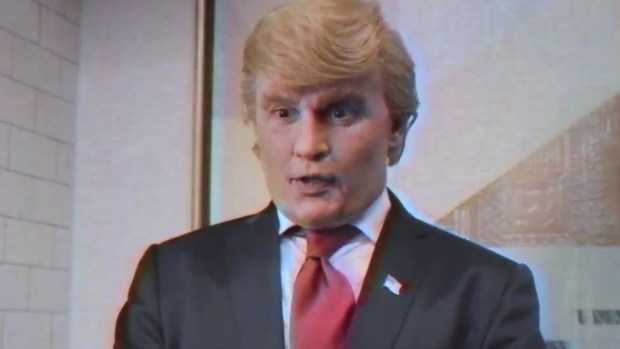 Johnny Depp as Donald Trump in Adam McKay’s online satire The Art of the Deal Photo: Funny Or Die

This video doesn't appear to have an embedded version but Funny Or Die does have an Apple TV app so you can watch from your sofa. Anyway, longer than our usual offerings, this contains what some critics are saying is Johnny Depp’s best performance in years.

Widescreen editor Dan Slevin has described the modern romantic comedy as a moribund artform. Here is Leigh Singer to reclaim the the genre for Sight & Sound:

Incredible collection of clips and a compelling essay.

We’ve linked to Matt Zoller Seitz before here but these video essays on the cinematic inspirations for Mad Men are the bomb. Seitz is the Mad Men expert and we can’t wait to read his book Mad Men Carousel, taking us on an episode by episode journey through the series.

Once again, no embedding so you’ll have to go to Vulture to watch them all – about five minutes each – but they’ll make you want to watch the full movies he references.

And, in case you missed it earlier today, Dan’s review of the new Zoolander sequel, Zoolander 2:

(By the way, we have a YouTube playlist now at the RNZ channel so you can watch all of our videos one after the other. Awesome!)

[*May not be the actual best. We haven't watched the entire internet. If there’s anything you know of that we’ve missed, let us know at widescreen@rnz.co.nz]