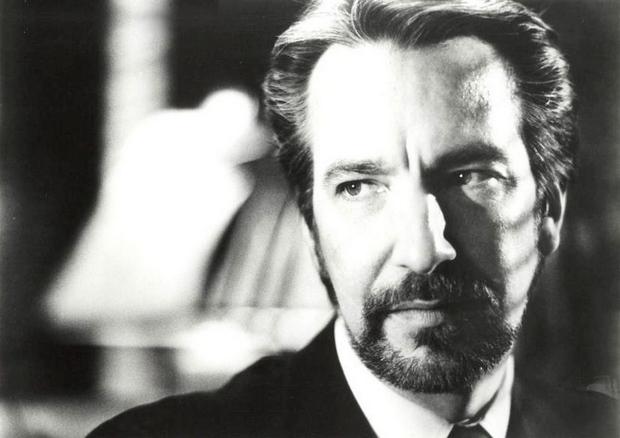 This year has started as last year ended for film fans with the deaths of exceptional contributors to film history and film craft. Today, we woke to the news that Alan Rickman (possibly most famous for his big screen debut, Die Hard, in 1988 or his recurring role as Severus Snape in Harry Potter) has passed from cancer at the age of only 69. Unnervingly like David Bowie at the beginning of the week.

Sheila O’Malley at RogerEbert.com has produced the best appreciation (so far) of Rickman’s unique contribution to screen art:

Rickman could have had a nice career playing villains. But 1990's "Truly Madly Deeply", directed by Anthony Minghella, upended expectations. Rickman played Jamie, the ghost of Juliet Stevenson's dead lover. Stevenson's character had been grieving the loss for a year, and one night she sits down to play the piano. As she plays, a cello suddenly starts up off-screen, and "Jamie," who had played the cello in real life, is seen sitting behind her. The reunion that follows is one of such wrenching emotion that it puts "Ghost" to shame. It's barely romantic. They clutch and hold, they weep and coo, they sob. As "Jamie," Rickman is both hilarious (he's always freezing, always cranky) and tragic (if she can't let him go, then he really can't let her go.) An entire new world opened up for Alan Rickman, at least in terms of the audience who had only seen him in a gigantic blockbuster as a multinational terrorist-villain. When Jamie says to Nina, "Thank you for missing me," his tone is quiet and thoughtful, but Rickman filled the line with a sense of almost humility: "This fabulous woman grieved ME this intensely? I have this much value?" His line-reading cracks open the heart of the film.

Of course, there have been gigabytes of reminiscences and appreciations of David Bowie’s life and work produced this week. Here's Anthony Lane being a tad contrarian in the New Yorker in a wide-ranging survey of Bowie’s contribution to film as an actor and musician:

Considering this addiction to chop and change, and to the mustering of sound and vision into a restless collage, it may be inevitable that, when Bowie did assume substantial roles, in other people’s films, he seemed less light on his feet. He was required to sustain a character, and to lend it an arc, whereas his natural tendency, given any arc, was to bend it or snap it in two. Movies are the bedmates of poetry, as Bowie knew, and to treat them as a sort of illustrated novel is to load them with a burden they were scarcely designed to bear. Thus, his cameo in “Zoolander,” whipping off his shades and guying his own status as a lionized legend beside the catwalk, is not only more entertaining, but more tightly bound to Bowiehood, than his entire leading role in “Merry Christmas, Mr. Lawrence.”

Iñárritu’s The Revenant picked up the most nominations in this morning’s Academy Award preliminaries. RNZ Widescreen’s Dan Slevin reviewed it here, making an explicit comparison between the (both nominated) central actors, Leonardo DiCaprio and Tom Hardy:

Meanwhile, at MoveMezzanine.com, Josh Spiegel offers a fascinating comparison between the two careers since they last worked together in Nolan’s Inception:

To watch DiCaprio and Hardy in The Revenant is to watch warring styles of acting, butting up against each other like Glass and the bear that mauls him. Much has been made—to the point where “much” is now a gross understatement—about the generally tough environment in which The Revenant was made, and the lengths that DiCaprio took to bring a fully lived-in aspect to his performance. (What was once “I ate a raw bison liver during filming” has now been repeated so frequently that it sounds more like “I slaughtered a herd of bison, ate all of their livers with fava beans and a nice Chianti, and then I wore one of their skins so I could go undercover as a bison and see if I could fool other herds.”) Hardy’s experience wasn’t quite as rough, but it did further solidify his status as a difficult actor to work with, which oddly fits the character of Fitzgerald perfectly. Glass and Fitzgerald are posited as extreme opposites on the spectrum of masculinity throughout The Revenant: the former is fierce, but always loyal, goodhearted, and appropriately paternal to his teenage son, while the latter is cowardly, selfish, greedy, and slovenly.

The lack of opportunity for women in Hollywood – or in film anywhere, to be honest – has prompted a campaign (using the hashtag #52FilmsByWomen) to get more people watching films directed by women so that their relative invisibility might be dealt to during 2016. Liam Maguren from Flicks.co.nz has taken up the challenge and his first post is already a pointer towards some interesting viewing options:

The Punisher is my favourite comic book property, but even I know a blockbuster movie adaptation makes about as much sense as Mad Max: Fury Road – The Novella. If there was ever a Marvel character that suited straight-to-video action glory, it’s Frank fucking Castle, and stunts specialists-turned-filmmaker Lexi Alexander pointed her horns forward and charged with War Zone.

With gore galore and little more, this is trashy B-grade goodness that puts the ‘luscious’ in ridiculuscious.