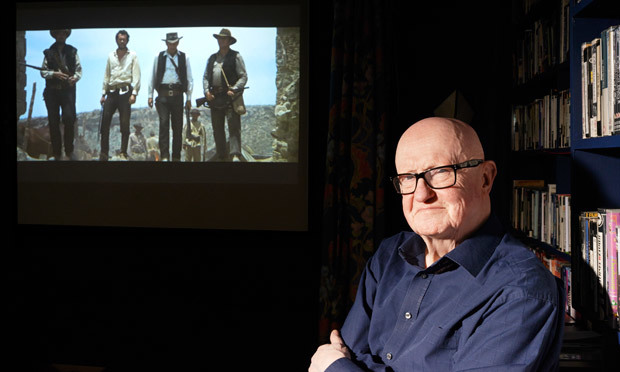 Observer film critic Philip French photographed on his retirement in 2013 Photo: Suki Dhanda for the Observer

French – along with Derek Malcolm in the Guardian and Alexander Walker in the Evening Standard – were my touchstones when I was growing up. Whenever one of them would mention seeing a film at a press screening at a dingy room in Soho I'd find myself thinking, I’d like to do that.

One would expect Derek Malcolm’s obituary in the Guardian to be definitive and it is:

He had an encyclopedic knowledge of the cinema that stunned some of his colleagues, and a memory to match. Many was the time one of us asked him a question about a film, or an actor, and only on a very few occasions did he not have the answer off pat. He was, in fact, the exact reverse of the kind of film reviewer often imposed on the arts pages these days who writes for effect and eschews much expertise as boring. In that respect he was a thoroughly old-fashioned critic who laid out his knowledge with painstaking eloquence.

Tim Robey in the Telegraph:

These days, we have the Internet Movie Database to remind us who was in Come Fly With Me – Dolores Hart, Pamela Tiffin, Lois Nettleton – but before it, there was Philip, who could have rattled these forgotten names off in his inimitable juddering style and told you everything else there was to know about them. Where most critics of his age and experience have whittled down their responsibilities over time – say to one or two major films a week – Philip was indefatigably determined to hoover every possible release up, no matter how obscure-sounding or shoddy-looking, and stay right through to the end: the very end, of the end credits. In his reviews, he could dispose of rubbish like the best of them – “Cops speak in a way that would get a tyro scriptwriter on The Bill fired”, he said of Woody Allen’s writing in Match Point. But the enthusiasm for great work still burned ever so brightly.

French’s ten greatest films list for Sight & Sound’s most recent survey is as good a list to start a love of cinema as any:

We shouldn’t memorialise French without presenting some of his actual writing. In 2008 he wrote a memoir of his life in cinema and criticism to coincide with his lifetime achievement Bafta award:

I love seeing movies as much as I ever did, but I don't like going to the cinema as much. Virtually all the little independent cinemas have disappeared. The larger cinemas, converted or newly built, lack character. Just as the vogue for Art Deco was getting under way, the Odeon Leicester Square was gutted of its prewar glory. I nearly wept in May 1972 driving into London from Stansted after some months of teaching in Texas, and passing two of my favourite cinemas, both closed down during my absence. One was the magnificent Astoria, Finsbury Park, beloved of John Betjeman, which is now a Pentecostal church. It had a marble entrance hall with a fountain and goldfish in the pool and a star-filled ceiling. The second was the Tolmer, across the Euston Road from Warren Street station. It reeked of cigarette smoke and disinfectant and always showed double bills. To me, all ports are different, all airports much the same. Cinemas have become as anonymous as airports.

It really is worth taking the time to read the whole thing.

Update: In more sad news, Penelope Houston has also passed away. She was editor of Sight & Sound for three and a half decades.