A lot of talk, less action on climate change in 2021 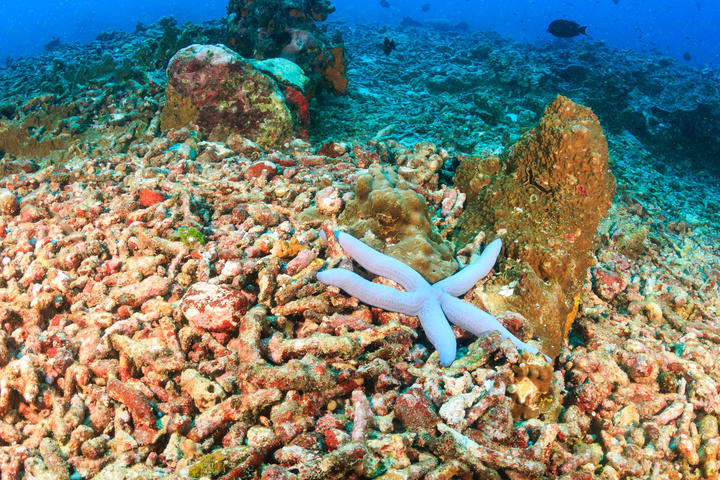 A single starfish on an area of bleached coral - the result of warmer ocean currents. Photo: 123rf

It's been another big year for the c-word.

No, not covid - climate change.

There have been huge reports internationally, from the UN's Intergovernmental Panel on Climate Change (IPCC), but also here in New Zealand with the Climate Commission launching its first blueprint to getting our country to carbon zero by 2050.

There have also been incentives to move to electric cars, with a rebate move from the Labour government, and of course the big climate change event of the year - COP26, held in Glasgow.

"We've certainly seen momentum in getting to the starting line of stopping climate change," she says.

"I wouldn't say we've made any actual progress on cutting emissions."

New Zealand's own emissions have been hovering around 80 million tonnes a year for a while, but Gibson says the caps on spending proposed by the Climate Change Commission report this year were promising.

The Commission proposes that between 2022 and 2025 the country cuts about five million tonnes of emissions every year, with potentially larger cuts after that.

And scientists have never been more sure that humans are affecting the climate.

The IPCC stated in its report that humans were "unequivocally" responsible for rising temperatures.

Even in New Zealand, Gibson says a report by MetService and Victoria University found that the Canterbury floods this year were made worse by climate change.

"They were 10 to 15 percent more severe than they would have been without that one-ish degree of warming we've already seen, because hotter air holds more moisture and therefore it dumps more moisture," she says.

Gibson talks about steps taken by the government this year, including work with the emissions trading scheme and the disappointing delay of its emissions reduction plan.

"The government's given itself an extension until May next year and what we have instead is a draft plan," she says.

"In fact, it's not even a draft plan...it's a consultation document, essentially a series of bullet points."

But Gibson is hopeful.

"I'm not actually as gloomy as some about how we've done this year...but obviously what we need now is to move at pace."