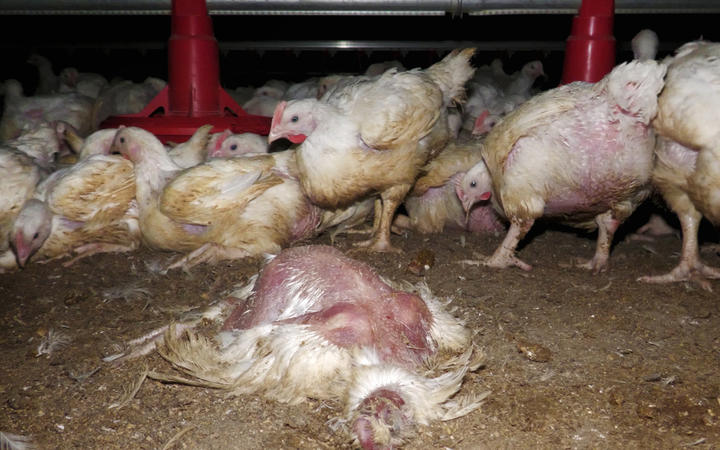 But all these pale in comparison to the humble chicken: every year, we eat more than 50 billion chickens.

Part of the reason for this is modern farming practices. Chickens are small and can be farmed for meat in great numbers, which means chicken meat is (relatively) cheap and plenty of people can buy it.

But increasingly, those modern farming practices are coming under scrutiny.

Today on The Detail, Emile Donovan speaks to RNZ’s Farah Hancock about a jarring video which shows the reality of life for chickens bred for their meat in this country, and a commitment from a big industry player which could change the nature of chicken farming in Aotearoa.

The video was supplied to RNZ by animal activist group Animals Aotearoa.

It shows the unpalatable reality of life for a meat chicken in New Zealand, with hundreds of chickens standing wing-to-wing in a dark barn.

Many of the chickens don’t look especially healthy, with patchy feathers and some barely able to walk – though poultry industry representatives say inferences shouldn’t be drawn from the video, which they say may have been selectively edited to look as bad as possible.

But Animals Aotearoa says it raises questions about baseline chicken welfare in New Zealand, and whether the high-volume intensive farming of chickens for meat is conscionable at a time when countries overseas are taking steps which may reduce productivity, but are likely in the best interest of the chickens. 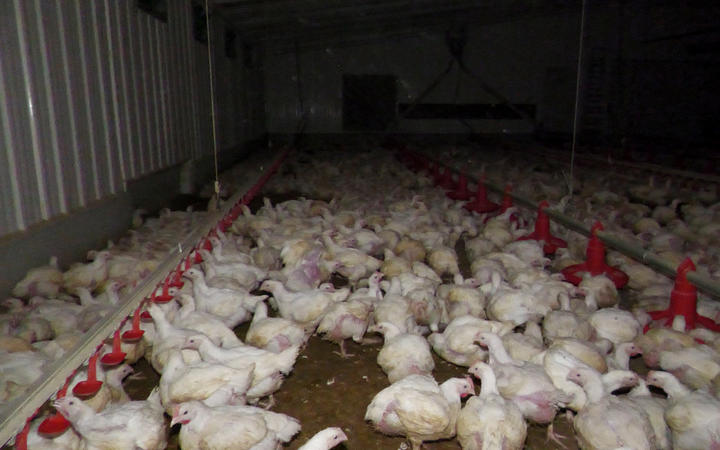 These are both ‘fast-growing’ chickens – meaning they go from being hatched to being slaughtered in four to six weeks.

They’ve been specially bred to grow quickly and produce a lot of breast meat, but their rapid growth can lead to complications, such as growing too fast for their legs to handle, rendering them lame.

Slower-growing chickens, which are used in places like France, Sweden and Denmark, take about two weeks longer to reach maturity, but aren’t available at scale in New Zealand, due in part to strict biosecurity laws.

They are more expensive to produce, but animal activists say their quality of life is much better.

Last week, fast food giant Dominos committed to switching from using fast-growing chicken to using only slow-growing chickens by 2026, saying it was the right thing to do and it hoped other outlets would follow suit.

“They’re the first and only company in New Zealand – and they’re challenging other companies to follow their lead”, says Farah Hancock.

“They say, ‘it’s happening overseas, it’s probably going to happen here, so we may as well get out and do it now’.

“It’s actually quite (a) big (deal) … once they’ve started that, it means the slower-growing breed will be established in New Zealand, and other companies that want to use them, it’ll be a lot easier to get hold of them.”

The introduction of slow-growing chickens would have repercussions: production costs can be up to 25 percent more expensive, and this cost would invariably be passed on to consumers.

“A lot of meat has become more expensive”, says Hancock.

“Chicken and pork hasn’t. But I also think consumers don’t see what goes on, because they’re sheds, they’re locked away, it’s behind closed doors, so I think another part of this is that consumers aren’t aware of the reality of the way we’re farming chickens now.”

Poultry industry groups make the point that chicken suppliers have a code of welfare to follow, and despite the jarring nature of the video supplied to RNZ, it doesn’t show clear evidence of wrongdoing.

And, in a sense, many farming practices would likely be shocking to people who pay little attention to how meat, or dairy, or wool, or leather, are produced.

But Hancock says if consumers demand better standards of the companies who produce these goods, they may be compelled to improve conditions moving forward.