The schemes and dreams over reducing cow methane 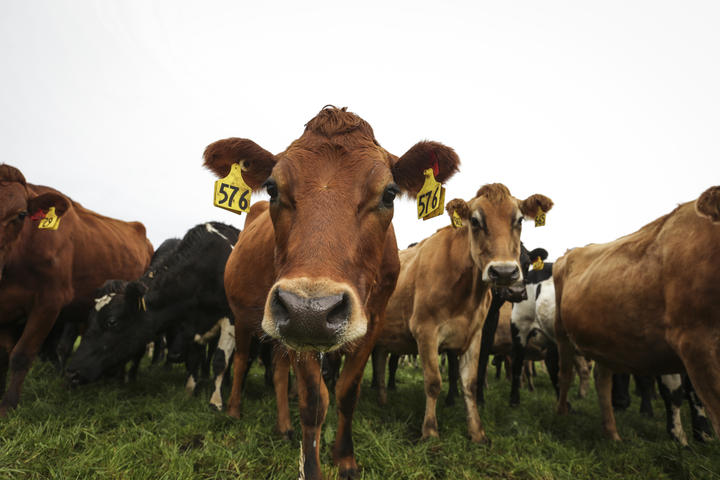 Millions of dollars is being spent on getting cows and sheep to produce less gas.

The projects in train range from genetics experiments, using seaweed in burp-free feed, and toilet-training cows. Some of it sounds ridiculous – but the animals produce methane, and New Zealand must do something urgently on reducing the amounts our agricultural industry is contributing to global warming.

Farmers argue that the country’s sheep and cows are the lowest methane emitters in the world but nearly half our total greenhouse gas emissions come from agriculture.

These schemes are aimed at doing enough to get farms to our targets – by 2030 biogenic methane emissions should be cut by 10 percent on 2017 levels. By 2050 the goal is for methane emissions to be 24 to 47 percent lower than they were in 2017.

“Methane is made from carbon and hydrogen, and it is a gas that arises any time you have organic matter breaking down without oxygen around,“ says farmer and academic, Jacqueline Rowarth.

It could be under the soil, in fossil fuels, in swamps, or in the chambers of the stomachs of cows.

As grass is broken down in the rumen, energy is released and the methane is what happens to the carbon.

“Because methane has a much shorter residence time in the air, if we started to cut methane emissions quickly, we would see the effect of that on the methane levels in the atmosphere very rapidly. So by reducing those levels we have a benefit of offsetting some of that warming.”

Today on The Detail Sharon Brettkelly has a look at some of the projects in place to try to stop cows farting – or more accurately, belching.

She talks to Jason Archer, a genetics specialist at Beef & Lamb Genetics, who is working on a seven year, $16.7 million project that’s partly government-funded.

The aim is to breed beef cattle that are more profitable, with better animal welfare, and with 10 percent less methane per kilogram of meat.

But when you have to first measure the amount of methane the animals belch out, data collecting becomes tricky. Most of the work at AgResearch in this sphere, targeted at breeding lower methane animals, has been done on sheep.

Archer says they really are at square one with the research – still working out the best way to measure methane outputs.

“This stuff all takes time,” he says. “I would like to think certainly within a 10 year time frame we can have information out there which is actively being used and really making a difference.”