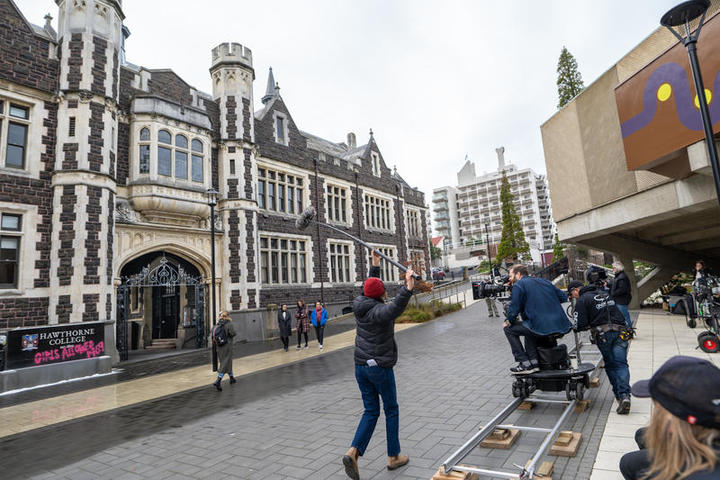 Last year New Zealand was held up as a safe haven for film production - we had crushed the curve, we were open and everyone else was closed.

There was the initial four week lockdown from March 2020 but we’d secured the first season of the Lord of the Rings series, Cowboy Bebop was being filmed, and so was James Cameron’s Avatar. Superstars Benedict Cumberbatch and Kirsten Dunst were here to film the Power of the Dog.

But this year Middle Earth is moving to the UK, one-off international films have wrapped up and Aotearoa has been forced into its toughest restrictions yet when other places around the world have much more filmic freedom.
“This year’s worse ... covid’s really just starting to hit the film industry now I reckon.”

Tom* is a film crew member with 20 years’ experience in the industry under his belt. He normally works on big American productions and right now, has no idea when he will have work again.

The Aucklander says overseas productions aren’t willing to commit to any filming here until lockdown has lifted. When restrictions do ease, there’s still the added barrier of MIQ spaces.

“I can quite easily leave the country and work on a film but I can’t get back in,” says Tom.

And even when covid’s not the most pressing issue, experts say New Zealand film infrastructure is in a real need of a boost.

Felicity Letcher has worn a lot of different hats in the film industry in the past 25 years. She’s part of the Auckland Screen Alliance, AMO studios based in Gisborne, runs prosthetics and special effects workshop Main Reactor with her husband, and recently published a report for New Zealand Trade and Enterprise about the demand for film studios across the country.

She says there’s a lot of appetite from the regions to build film industries, especially in a covid climate where tourism isn’t going to be our biggest export earner anymore. 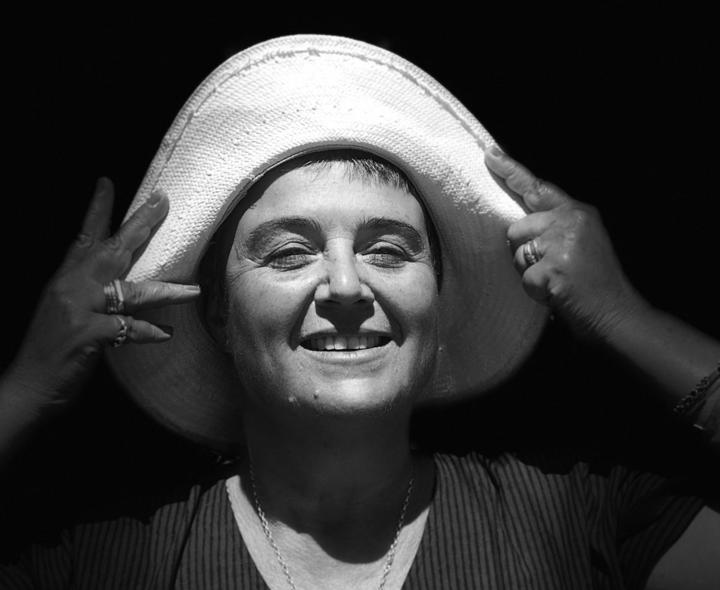 “We’re going to be very protective of who comes in, tourism isn’t going to be what it was for many years, so we need to be saying ‘how are we going to be earning export dollars?’

“Councils in the regions are looking around and going, ‘what - other than tourism - can we look at in terms of economic drivers?’ and they’ve stumbled on creative industries. So they’ve kind of gone, ‘wow, this screen thing’.”

And that’s because films support so many different suppliers - including food, accommodation, construction and training for local crew for an extended period of time.

The industry employs around 16,200 people and contributes $3.3 billion to GDP every year.

But the key is enticing film productions to set up shop here.

Letcher’s report surveyed 65 companies in the film industry here, as well as other players in the likes of gaming and E-sports. A lack of studios was the number one constraint for getting productions up and running in New Zealand, closely followed by crew shortages.

Letcher is quick to point out that big studios are not just for large international production companies either. Productions are categorised into different tiers, depending on how valuable they are. Ideally we would tap into the lucrative international feature and TV series market, but smaller repeat series provide consistency of work.

Big business in our bigger cities

In the capital, we have Avalon, Stone Street (from Peter Jackson) and new studio Lane Street. In Tāmaki Makaurau, there’s Auckland Film Studios (which was the base for the LOTR series), Kumeu Film Studios, Studio West and X3 which opened in Manurewa last year.

Letcher says in the last two years, both centres have seen a surge in demand which “has led to current studio facilities being at full capacity.”

The government recently announced $30m worth of funding to expand the Auckland Film Studios with two new sound stages. Auckland Council, which owns the studios, put $5m towards it. 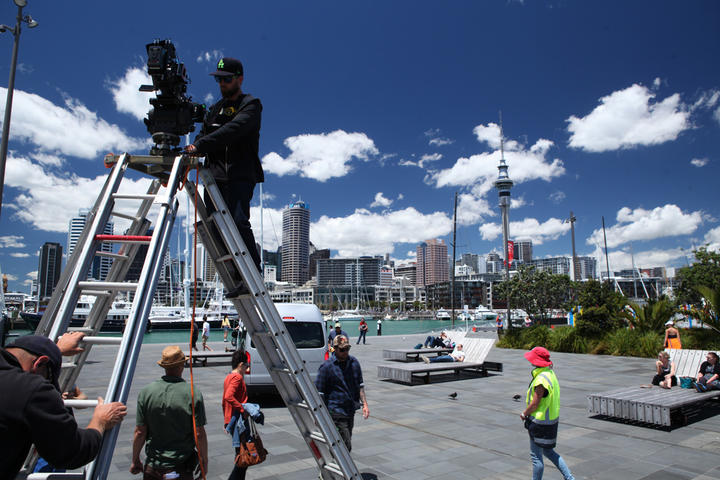 Film studios are also in the works in places like Queenstown and Wanaka. Silverlight Studios’ application to build a 332 hectare film studio complex, including a school and theatre as well as replicas of famous sites like New York central park, off the Wanaka Luggate Highway is being fast-tracked by the government as part of its COVID-19 economic recovery programme.

Letcher says it’s great that there are individual projects happening but - “what we require is a bit more intention and focus from the government to go, ‘yes, we see the creative sector as a massive driver in the post-covid economy’.”

Building an industry is not as simple as just building a studio.

“We need to look at it the same way they look at building theatres and convention centres - they are a loss leader,” she says.

Letcher says the country needs to be strategic about where they are built and whether there is an ecosystem already in place to support it. That means considering things like whether film crews are already based at a location or if one is built, whether people would want to move there.

Loss of the Lord of the Rings

Losing the Lord of the Rings series is a sore subject for Felicity Letcher, who was part of the attraction team that secured the first season of the series to be filmed in Auckland.

“We were in huge negotiations on a multiyear deal so actually we need to assess what happened as a sector.”

Amazon, which is making the series, already has big investments in the UK. Letcher understands the company bought its own studio there and being based in Europe gives the conglomerate a depth of crew options that isn’t isolated to just one country like it is in New Zealand.

In spite of that Pam Ford from Auckland Unlimited, the city’s economic and cultural agency, says Amazon pulling the plug here was a “surprise”.

But she’s confident things will bounce back and says the team is currently dealing with inquiries about filming in Auckland and using those studios. 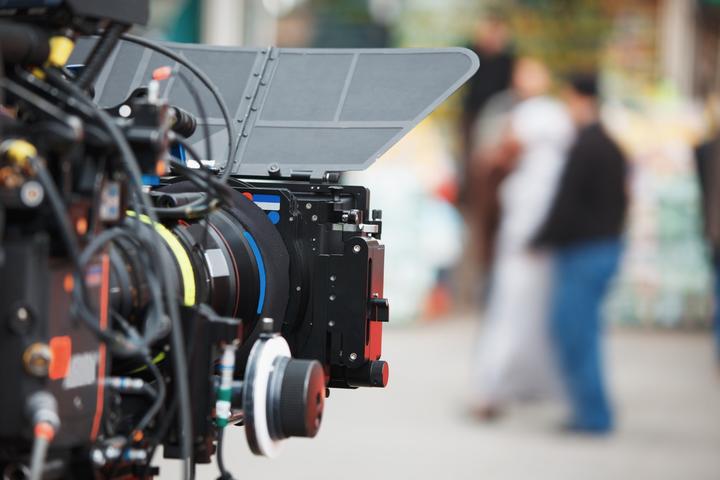 “Domestic productions will be able to start back up once we go into level 2 and there’s a lot of work in that space,” she says.

“In terms of the whole international space getting back to pre-covid, I think that will take probably a year...but I think the whole world needs that year-plus timeframe to be back up and running.”

The Auckland film industry alone is worth $660m GDP, employs about 4000 people and keeps 1800 businesses going across the sector.

Right now, a lot of those directly employed by film are facing a lot of uncertainty and are deciding whether or not to leave the country in pursuit of greener and critically - more open - pastures.

But Ford says in some ways, that is the nature of the industry,

“It is very cyclical,” she says. “They’re used to going offshore and coming back.”

For Tom, that’s just what he might have to do.

“You have to be pretty flexible in the film industry ... and at the end of the year if it’s still looking like this then I’d definitely have to consider going overseas.”

*Tom's name has been changed