The case against Uber - when is a contractor really a worker? 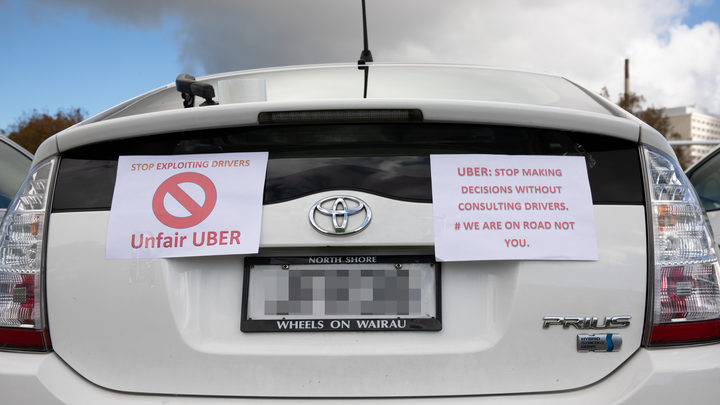 Some Uber drivers took to the streets to protest against what they say are unclear policies in the company which has left them out pocket. Photo: RNZ

Earlier this year, the United Kingdom’s Supreme Court handed down a landmark decision, affirming that Uber drivers were not, as previously asserted, independent contractors; but workers, and therefore entitled to benefits like minimum wage and holiday pay.

The decision followed in the footsteps of similar judgments in France and California.

On the flip side, several cases brought by Uber drivers before Australia’s Fair Work Commission claiming employee status have been rejected - although in a decision two months ago, the commission found that a rider for the Deliveroo meal delivery company was an employee.

In New Zealand an Employment Court case dealt with just before the UK case determined that a sacked Uber driver was not an employee, but a self-employed contractor.

FIRST Union and E Tū are now seeking a new determination from the Employment Court that would upend that decision and rule that drivers here should be considered employees.

Amid all this, a tripartite working group is looking at the status of vulnerable contractors in New Zealand – workers whose status as contractors leaves them in a precarious financial position, or limits their freedoms as workers.

Today on The Detail, Emile Donovan speaks to FIRST Union’s Anita Rosentreter, and Business New Zealand industrial relations manager Paul MacKay, about the unique disruptions Uber has brought to employment categorisation around the world, and whether there needs to be change to update this for the 21st century.

You could spend hundreds of words describing the differences between employees and contractors, but in a very simple sense, it can be boiled down to a single sentence: employees have an employer; contractors have a client.

An employer can set expectations, closely manage performance, and direct how and when an employee performs their duties.

A contractor, on the other hand, is hired for a job – how and when they get there, within reason, is up to them.

Being an employee comes with certain benefits: your employer must pay you at least the minimum wage, for example. You have the right to join a union. You are entitled to sick leave and holiday pay. Contractors, on the other hand, are their own bosses – they have to sort our their own affairs.

The appeal in being a contractor lies in being your own boss, and in the idea that contractors can work for many different clients at once.

Additionally, because contractors often have specific, highly-desirable skills – when you need a plumber, you REALLY need a plumber – the rates they can charge are often higher than the hourly rates employees get.

However some jobs, like Uber driving and food service delivery, don’t fit neatly in either category.

“Uber’s changed the face of the opportunities for using people to provide services”, says Paul MacKay.

“There’s an interface between the client and the user of the service that is not human ... the app, or platform. You’ve got a driver who gets work through accessing an app which attaches them to a client.

“The tests that the courts have to consider are: who’s doing what for who? Is the driver driving for Uber? Or using Uber’s tool to get work for themselves?”

Anita Rosentreter, however, says employers have taken advantage of slack enforcement and, in many cases, a lack of knowledge from employees of their own rights, to mischaracterise working relationships which are clearly employer-employee as contracting situations.

“Uber has taken advantage of this idea that they are great disruptors ... the reality is, they have an impressive app, but that’s a distraction.

“When you strip that away (and) looking at the reality of the work workers do ... to me, it’s quite clear these workers are employees of Uber.”

The unions’ submission to the Employment Court is likely to take some time, but Rosentreter says their case could be heard before the end of the year.

For more on this story, see Rebecca Macfie’s report on Newsroom.