Behind nurses' anger over wages 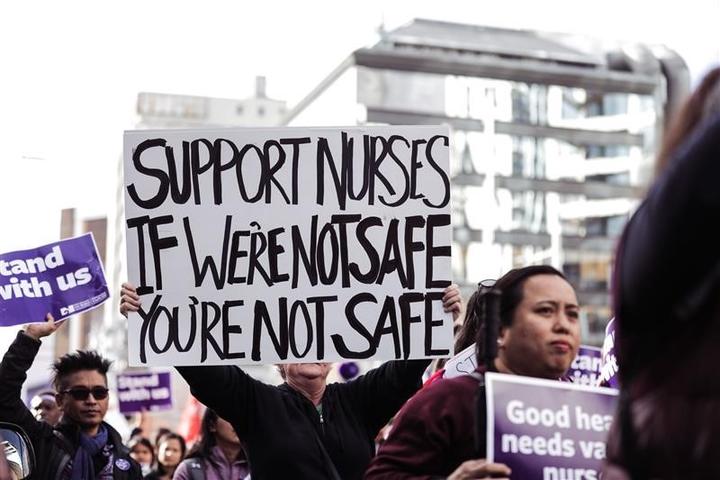 The nurses are striking again.

In 2018 tens of thousands of them took to the streets, frustrated with pay and working conditions.

They eventually agreed to a pay deal, but three years later industrial action is back on - nurses went on strike last month and three more disruptions are planned in the next three months.

Today The Detail's Jessie Chiang talks to RNZ health correspondent Rowan Quinn about why it's come to this.

"I think what they're feeling is that, they really stepped up during covid," she says.

"They were the people on the frontline. Then a lot of them, even when covid's not in the country, their everyday jobs are trickier now because there are all these extra covid precautions."

Quinn also talks about the pay difference between the public and private sectors, and explains the pay deal that was agreed to in 2018, which included a commitment to look at pay equity issues.

But pay equity still hasn't happened and Quinn says there's the question of whether these strikes would be going ahead if it had been resolved.

The main union negotiating a deal with District Health Boards (DHBs) is the New Zealand Nurses Organisation (NZNO) and they're asking for a 17 percent pay rise for members across all levels – which is what they believe equity would amount to.

The DHBs have offered pay increases between 0.9 and 12.2 percent with those on lower salaries getting the largest increases.

The NZNO, which represents about 30,000 DHB nurses, has voted to strike on July 29 for 24 hours, eight hours on August 19 and another 24-hour strike on September 9 if an agreement isn't sorted.

The other big concern for nurses is staffing - the shortages are huge, and the lure of overseas offers is tempting.

"On the North Shore they were having to call off surgery because there was a shortage of theatre nurses," says Quinn.

"Waitematā DHB, they've been trying to recruit 100 nurses this year and they're really struggling."

The Detail also speaks to an NZNO union delegate who's been working as a nurse in Auckland for the past 20 years.

"You'd be looking at about every shift that you're trying to plug a gap, so people are either extending into the next shift to cover it or someone's coming in on their day off," he says.

"Something a lot of us are doing now is, you're getting ready for work and you're thinking, what is it going to be like when you get in there?"

The senior nurse describes the assaults and verbal abuse that staff are subjected to, and the struggle of feeling like you haven't done your best for your patients.

"You can have a really hard shift but if you can walk out the door and think I did a really good job, then it's ok. But it's when - and we all do it - we all come home and think I should have done this and I wanted to do that and I was really short with that patient, but there's nothing you can do about it."