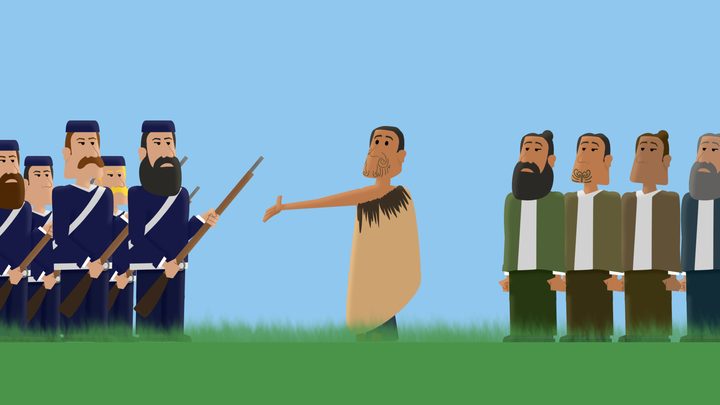 In early 2019, the government announced it would be revamping the history curriculum: from 2022, all students would study the history of Aotearoa New Zealand, every year, until year 10, when it becomes an optional NCEA subject.

The announcement was beyond the wildest dreams of many history teachers, considering that up until this point there was no obligation whatsoever on schools to teach their students about this nation's history.

However, building a curriculum from scratch presents its own difficulties - many of them exacerbated by the fact that Aotearoa's history - like every nation's history - is fraught and morally ambiguous.

Decisions have to be made about how certain issues or social phenomena are framed; some teachers felt understandably apprehensive at the prospect of teaching students about events which affected the lives of their ancestors - sometimes in tragic and enduring ways.

On today's episode of The Detail, Emile Donovan speaks to historian Dr Vincent O'Malley about the nuances and the pitfalls of the project; the wealth of history on our doorstep; and why it's important to remember the events of the past, even when they might make us uncomfortable.

He says engaging with that past helps us to engage more confidently in the future. “There are lots of ways that history is not only helpful, but essential, for young people to have a learning of.”

Although the decision to make New Zealand history compulsory was made two years ago, it was only in February of this year that the education ministry reported back with a draft curriculum.

Prominent historians critiqued the draft curriculum, saying it missed out large swathes of Māori history pre-colonisation, and could fall into the trap of instructing children in what to think, rather than how to think.

But there is widespread acknowledgement that the level of knowledge of New Zealand's history among the population is, largely, woeful.

To test this theory, The Detail conducted a moderately difficult, completely unscientific pop quiz with some members of the RNZ newsroom.

1: During what century is it generally agreed that Māori first arrived on Aotearoa's shores?

2: What city is also known as Ōtepoti?

3: Where in the country is Ngāti Porou based?

5: What was the name of the ship Captain James Cook sailed when he first reached Aotearoa's shores?

The only question correctly answered by all the participants was the final one.

“As a nation we’re a land of Tudor and Stuart history experts – we know more about that history than we do about our own. There are probably more New Zealanders who could name Henry VIII’s six wives than could describe the three articles of the Treaty of Waitangi.”

He says the new curriculum should be embraced - and may well see an interesting shift in knowledge, with students educating their parents.