The Day of the Vaccine 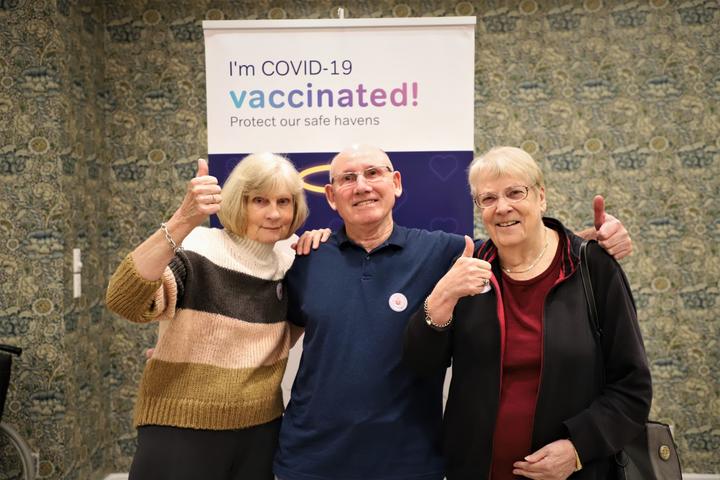 Residents Ellen Lund and Don and Ann Gibbon after getting their dose. Photo: Maryvonne Gray

Outside the reception area, the visitors' carpark is full with an army of cars which transported the dozens of support staff involved in the operation - vaccinators, nurses, pharmacists, and so on.

The first inoculations began at 5.30am, says village manager Dean Jackson. It's the culmination of a lot of precision planning.

Janine Snape is Ryman's infection controls specialist, and oversees these vaccination days at all its villages around the country.

She says the vast majority of residents are keen to get the vaccine - perhaps belying fears that, given the elderly are most at-risk when contracting Covid-19, that vaccine hesitancy might be high among this group.

Resident Ross Johnson says many people at the rest home grew up at a time when the fear of contracting polio was very real.

He was 10 years old in 1948, when a polio epidemic spread throughout New Zealand.

More than 1,000 people were infected, according to the New Zealand Herald, and around 70 died.

Children were banned from public transport, and schools were closed for months as the disease ran rampant.

Many residents of Sir Edmund Hillary Retirement Village had to take time off school in their youth due to outbreaks, and had memories of taking the vaccine for the first time - orally, rather than being injected.

Johnson believes this experience reinforced how vital vaccinations were.

"Vaccines are going to fix people around the world," he says.