Are Amazon's tax funded benefits worth it? 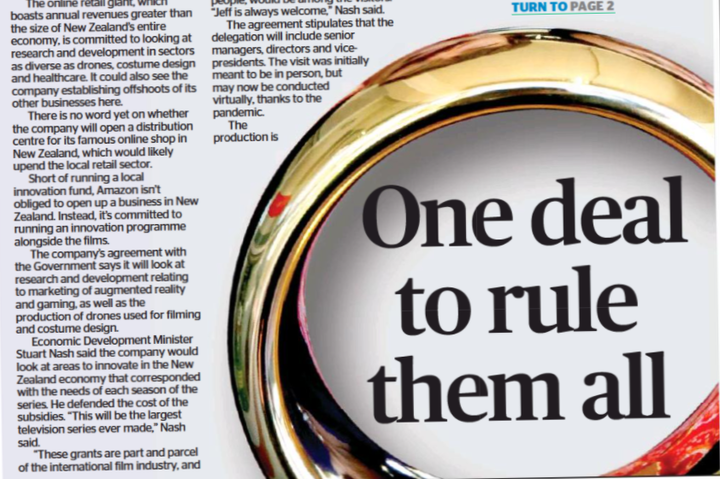 Thomas Coughlan's revelations of the deal done with Amazon on the front page of The Press. Photo: PHOTO / RNZ Mediawatch

The Lord of the Rings film series provided one of the biggest boons to tourism this country has ever experienced - and now, with a new TV series based on JRR Tolkien's universe being produced by Amazon, we're understandably keen to capitalise on our affiliation with Middle-Earth.

But when does 'keen' become 'too keen'?

A long-running investigation by Stuff senior political journalist Thomas Coughlan earlier this month highlighted the remarkable dexterity of the government in bending over backwards to ensure the Lord of the Rings TV show - currently known as "Unknown Amazon Project" - would be filmed in Aotearoa.

It's a path strewn with expensive dinners, urgent emails and glamorous holiday weekends, as officials from the Film Commission, Tourism NZ and the Ministry for Business, Innovation and Employment buttered up Amazon executives to secure a deal worth hundreds of millions of dollars over the next decade.

But it also involves the government giving hundreds of millions of dollars in rebates to one of the world's biggest and richest companies.

Today on The Detail, Emile Donovan sits down with Coughlan to discuss the machinations behind the golden handshake which secured the most expensive TV show in history - and whether the subsidy which facilitated it has outgrown its original purpose.

"The New Zealand government was very keen to have this shot here for a number of reasons," Coughlan says.

"We like to be competitive in the film industry ... we've funded hundreds of screen projects through our screen production grants. 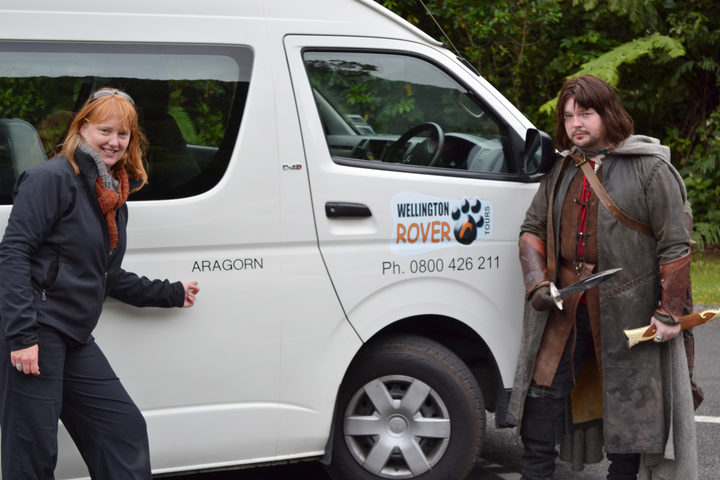 A tourist on the hobbit trail dressed as Aragorn, from The Lord of the Rings. Photo: Rover Tours

"What makes this project different is that it's set in the Lord of the Rings universe.

"All the projects that go through this scheme are looked at with a tourism lens - so tourism officials were seriously keen on this project. Because, of all the film projects the government's contributed to over the years, there is nothing like Lord of the Rings."

While exact numbers for the Amazon LOTR show are hard to come by, the company is expected to spend at least NZ$650 million, with more likely over the coming years if the show takes off.

This money will be pumped into the wider economy - providing jobs for digital effects workers, writers, actors, as well as caterers, accommodation providers, and so on.

However, it'll get a lot of that money back in the form of rebates.

In order to attract foreign screen productions, the New Zealand government offers a 25 percent rebate on all money spent in New Zealand - in this case, that'll be more than $150 million.

And while Amazon will still be pumping more than $400 million into the wider economy, this rebate money comes directly from the government's coffers.

All things considered, Coughlan's calculations suggest the government will be spending around $250 million a year to keep the rebate scheme alive - nearly quadruple what was being spent 15 years ago.

It's a classic case of cost-benefit: there are costs, and there are benefits - including, possibly, New Zealand forming a working relationship with Amazon moving forward - which could be a tremendous boon.

But Coughlan says there is increasing pushback against the screen production rebate.

“Everyone agrees it’s a rort,” he says.

“The irony is that the second largest claimant after the Lord of the Rings is the Avatar sequels and we will be ploughing more money into a film about a fake indigenous culture than we are into Māori TV, which tells the stories of New Zealand’s indigenous culture and real people.

“It doesn’t quite wash.”