Society on beyond Dr Seuss 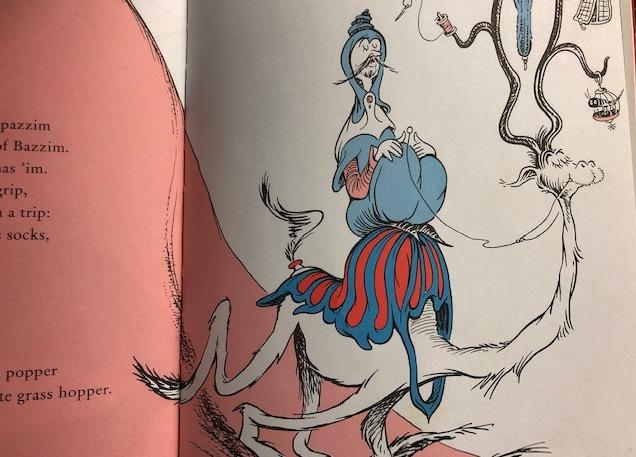 The offensive illustration from On Beyond Zebra, one of the six Dr Seuss books that will no longer be published Photo: Dr Seuss illustration

Earlier this month Dr Seuss's estate announced six of the legendary children's cartoonist's lesser-known books would no longer be published, ostensibly due to their outdated, stereotypical portrayals of ethnic minorities.

While it didn't explain exactly what was objectionable, the estate issued a statement saying "these books portray people in ways that are hurtful and wrong. Ceasing sales of these books is only part of our commitment and our broader plan to ensure Dr Seuss Enterprises's catalogue represents and supports all communities and families".

Immediately, there was an outcry: many observers bemoaned what they saw as "cancel culture" extending to a figure who many people hold dear in their hearts.

So, was there any justification to this decision? Is it, as they say, PC Gone Mad? Or is our emotional connection to these works blinkering the very real fact that what was suitable for children to read in the past may contain messaging which is harmful in 2021?

Today on The Detail, Emile Donovan speaks to lawyer and writer Juliet Moses about viewing old literature through a modern lens, and separating the artist from the art.

"I saw a headline", she says, explaining how she first came across the story.

"My immediate reaction was, 'oh God - another victim of cancel culture'. I have this nostalgia associated with him, as I'm sure most people do. I felt ... crestfallen."

But, as is often the case, digging under the surface reveals a more nuanced picture.

Dr Seuss was born in the United States in 1904 - by just about any metric, a less enlightened time than today.

You'd be hard-pressed to find many people who grew up in the early 20th century in America who hadn't internalised what we'd now consider pretty unhealthy views on race, gender roles, and so on.

But it's hard to defend some of Seuss's work, particularly during his career as a political cartoonist during the Second World War when he essentially produced pro-America propaganda.

Pro-America, of course, meant anti-Japanese - and some of Seuss's work in that period is tough to look at now: undeniably racist, portraying characters with grotesque facial features, mocking their accents, with dark themes of ingrained cowardice.

These problematic aspects of the Seussian canon have been discussed in academia for decades, but now that critical lens is being applied to his children's books too; serious articles, published in academic journals, argue that "Horton Hears a Who" is a white saviour parable; that "The Cat in the Hat" is a metaphor for a dehumanised black man.

Is there a point where this hyper-academic, layered analysis wears a bit thin?

As well as being a lawyer and contributor to The Spectator, Juliet Moses is a spokesperson for the Jewish Council of New Zealand and regularly speaks about anti-semitism in everyday life, as well as in media.

Asked whether she would support the estate of William Shakespeare or Charles Dickens if they decided to stop publishing The Merchant of Venice or Oliver Twist - two great works with Jewish characters often seen as anti-semitic - Moses is unequivocal.

“These are major works of art from major artists,” she says. “I would hate to see any of their work lost, and not performed or not published.

“Individual autonomy should prevail. We should each person – each adult – look at the book and decide.”