John Key on Joe Biden and why he's good for us 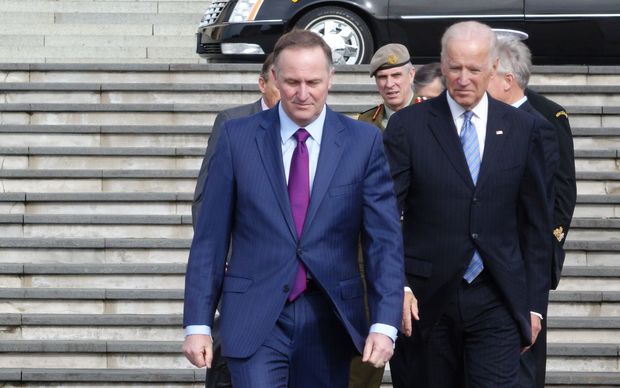 America’s new Commander-in-Chief has connections to New Zealand built during his years as vice-president to Barack Obama.  Joe Biden has visited here, he loves rugby, he plays consensus politics and he’s on the same page as this country over climate change.

He’s also very much part of the Washington beltway and won’t be springing any surprises on his official advisors.

Today on The Detail, Key talks about his encounters with the now President, and how he’s likely to dove-tail with New Zealand’s thinking on a multitude of issues.

“The first time I met him I thought he was the quintessential American politician,” he says. “He was very … complete, actually as a politician. He was very warm, very engaging, knowledgeable, thoroughly pleasant, made you feel like you’d known him forever .. but genuine, actually I thought, about New Zealand and the two countries’ relationship and our shared history and heritage. I liked him. I really thought he was a genuinely nice guy.”

Biden came to Auckland in 2016 when he accepted Key’s invitation to send a ship to our navy’s 75th anniversary celebrations – breaking a 30 year deadlock in the military relationship that had broken down over our nuclear stance.

“They thought New Zealand had gone from being probably ironically on the bad boys list … to maybe the good boys list,” he says.

Key says Biden is a centrist politician and will work across the aisles.

“I remember thinking he was eminently sensible,” he says.

But don’t expect him to automatically roll back all the changes that Donald Trump rolled back from the Obama era.

“It will be interesting to see what happens next,” says Key. “Many of the issues that Donald Trump raised have been long held views actually in the State Department.  That includes that the Chinese haven’t always played fairly, especially over territorial rights.

He says a lot of the thinking has changed in the last four years.

One reversal Key predicts will happen almost immediately is America’s re-signing to the Paris climate change accord.

And he believes it won’t be long before Jacinda Ardern gets an invitation to the White House – something that didn’t happen for her during the Trump years.