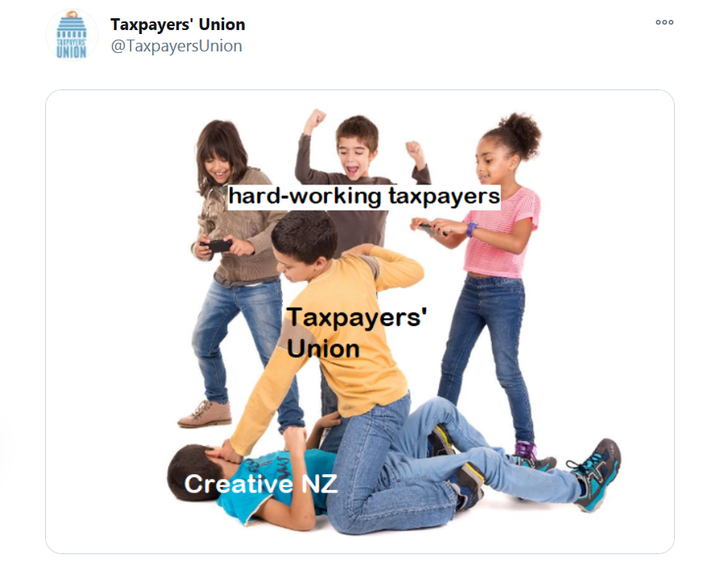 Over the past few months, Creative NZ has been quietly doling out millions of dollars in funding to artists whose ability to work has been compromised by Covid-19.

Since April, more than $16 million has been paid out to more than 650 projects.

This is public money, taxpayers’ money – and a couple of weeks ago, the Taxpayers’ Union lobby group got wind.

In a series of tweets, it drew attention to (or, in many observers’ eyes, ridiculed) some of the more … shall we say, unusual proposals.

And, to be fair to the Taxpayers’ Union, some of these proposals do sound a little odd.

Writer and filmmaker Duncan Sarkies was awarded $26,000 towards “writing a novel about the collapse of democracy in an association of alpaca breeders”.

Actor and musician Peter Daubé got nearly $22,000 towards “the writing, arranging and preproduction of music that forms a song-cycle from the suburban labyrinth”.

Writer and performer Rosemarie Kirkup got nearly $17,000 towards “the development of a first draft of a play exploring the menstrual cycle”.

On today’s episode of The Detail, Emile Donovan speaks to Wellington author and comedian Eamonn Marra, and Creative NZ chief executive Stephen Wainwright, about what Creative NZ’s role and responsibilities are; the factors that affect whether a project gets funding; and what a difference a few thousand dollars can make to the life of an artist.

In July, Creative NZ awarded Eamonn Marra $13,000 to research and write the first draft of a novel about male affection in hypermasculine spaces.

It’s the biggest payday he’s ever gotten for his artistic work. He got a $3000 advance for his last book, and that money comes out of his royalties until he’s sold about 1200 copies – which is a lot of copies for a New Zealand book to sell.

Marra says when it comes to gripes around how public money is spent, hitting up the arts is like shooting fish in a barrel.

“Generally New Zealanders do not care about New Zealand arts unless it’s really big – unless it’s Eleanor Catton or Taika Waititi or even a band like The Beths that’s started doing really well overseas.”

But he also thinks the system probably isn’t the best process to distribute money to the arts.

“It just ends up going to people who are really good at filling out forms,“ he says. “People who have really good connections to lawyers and accountants … who may not be the most deserving of the grants.”

Creative NZ’s chief executive Stephen Wainwright says despite his position, he completely understands why some people might question giving public money to such florid-sounding projects.

But he points out the similarity to titles on PhD dissertations, which read like a foreign language.

“But actually, I’ve got confidence that the university system knows how to manage and work with people who want to take their intellectual pursuits to the highest possible level with a doctorate. And I can get that somebody who’s not particularly interested in the arts or doesn’t want to take the time to understand in a deep way what’s going on, might look at the shorthand version of something and say, ‘that’s weird and wanky’. I totally get that.”

But he suggests if you have doubts with what a public institution is doing, take your issues up with them, and have an adult conversation with them.

“I think it is a low blow to parody and take out of context what applicants have put forward … and then when you peel the onion on that you can actually see there’s a lot of depth to all those proposals; they’ve all been looked at very hard; and in nearly every case they’re delivering things to the public, that matter to the public.”