The goodies and baddies of the 1pm covid presser 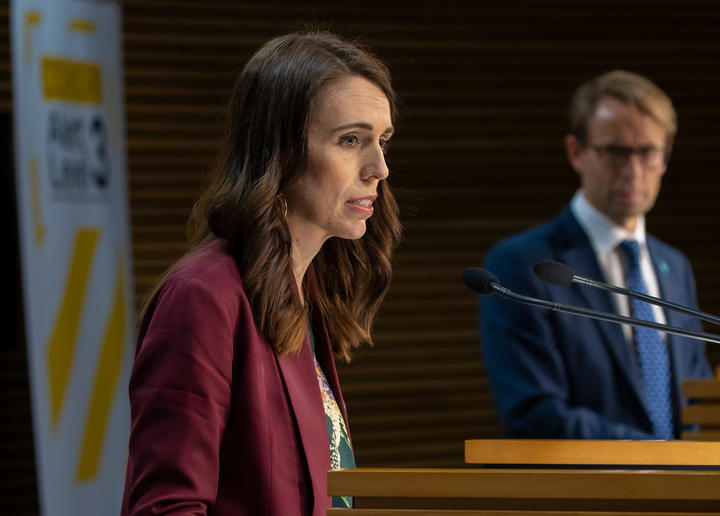 The daily reality TV show that is the 1pm Beehive news conference has turned the spotlight on the journalists covering it, with critics calling them hectoring and aggressive.

But Stuff political journalist Thomas Coughlan tells The Detail's Sharon Brettkelly we live in a free-thinking democracy and we need to hold our politicians to account.

“There are questions that politicians don’t like to be asked, let alone being forced to answer – that’s probably where the shoutiness comes from,” he says.

The routine has been the same nearly every day for 25 weeks; at 1pm the Prime Minister - or another politician - steps up to the platform with, usually, the Director General of Health Dr Ashley Bloomfield.

"It’s this very dark, poorly lit room in the bottom of the Beehive," Coughlan says.

"I actually find it quite a tiring place to be, the atmosphere is so draining it has this soporific quality to it."

But as soon as the microphones are "hot" and live streaming begins the atmosphere changes.

Coughlan describes to The Detail the moment the journalists arrive in the theatrette and set up their microphones, the sounds of the hand sanitiser machine that herald the arrival of Ardern and Bloomfield, and what happens when the Prime Minister says she's "happy to take questions".

And it is those questions and the behaviour of the journalists asking them that are under fire.

Documentary maker Robyn Paterson says the press gallery journalists risk undermining their own validity with their aggressive, relentlessly repetitive questions. In her recent opinion piece on Newsroom.co.nz she asks if their approach threatens to "derail the nation's co-operation at a time when it is most needed".

"I think it’s that fine line isn't it, between what is scrutiny and then flips into ‘gotcha’ or what some would call harassment," she says.

From Coughlan’s perspective the criticism came from nowhere, and the questioning is no different to any other press conference with the Prime Minister or other politicians - except it goes out live to the public.

From the first Covid press conference, he says, "what was going on was obviously extraordinary and unprecedented. The way that the questions were being asked and the way that the gallery was conducting itself was really quite normal.

"In those 1pm press conferences there really is no material difference from a post-Cabinet press conference or a stand up with the opposition; it doesn't feel any different.

“The criticism seemed to come from nowhere because this really is the way it’s always been and actually no one has had an issue with it in the past because I don’t think anyone’s been watching.”

He says people are "choosing not to understand" the repetitive questioning.

"Politicians won't voluntarily surrender the whole truth. As a journalist you have to repetitively question and when a question is repeated it is refined each time ... in such a way that it becomes a closed 'yes' or 'no' question."

Coughlan says transcripts from the press conference show that a lot of the questions are not answered and repeat questioning is a way of forcing the politician into giving an actual answer.

But Paterson says journalists need to be mindful of the public needs.

"I really feel that at times that hasn't been taken into account. What do the public need? What we are facing at the moment is a particularly tricky disaster because it’s a long term disaster and it’s ongoing … and a public health response requires widespread and continued public buy-in.”