Could boxes from China solve our housing problems? 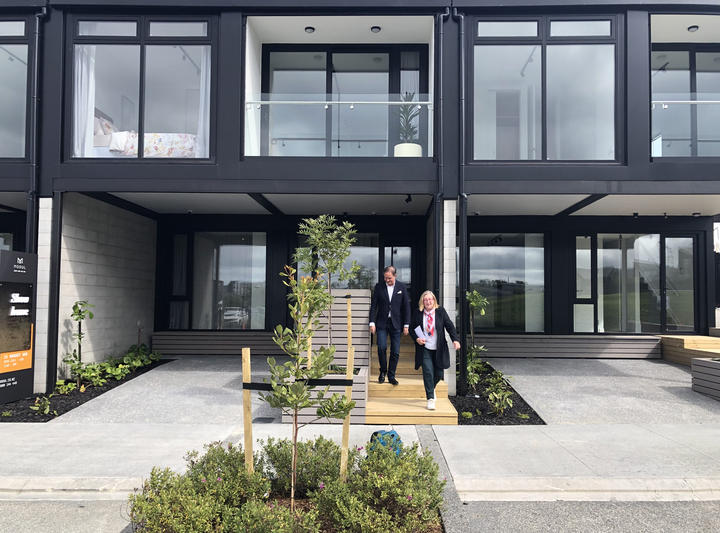 When Tony Houston sold his successful GJ Gardner franchises in Auckland three years ago he still wanted skin in the game, but he was searching for a new formula for building a house.

That new formula arrived at Hobsonville Point last month. Houston, who has built 700 homes through various ventures, watched as cranes lifted big steel boxes off the back of a truck and placed them on land at Nuggett Ave, adding to the array of new builds in the suburb.

But look closely at that rectangular box as it floated through the air it and you would see a fully formed home, complete with taps and door handles.

Houston, the managing director of Neilston Group, calls it a solution to the housing crisis.

The finished product was made in a factory in Guangzhou, China, shipped to Auckland and on the same day it arrived at the port, it was in place.

Four boxes were stitched together to make up each of the first three two-storey Modul homes but Houston says the next shipment will be two larger boxes per house. Another 23 will be put up in the suburb and 120 are destined for Roskill South, a large Kainga Ora redevelopment. Half of those will be sold in a ballot for first home buyers.

"We've had a lot of mistakes, we call them learning opportunities, we've had a great deal of those over the period.

The mistakes or problems have been "designed out".

Houston says the formula means he can put up a mix of mass-produced, affordable, KiwiBuild and market-priced houses, and make money.

But the crucial part is making the houses in China.

Many prefab housing companies have failed, he says because of the cost of materials and labour as well as running a factory.

Houston has a video presentation showing the first Modul homes being craned into place in Hobsonville. The presentation also includes a comparison of the cost of plasterboard at the Home Depot in the US, $9.33 versus $30.69 at Mitre 10 in New Zealand.

"I did this not to have a go at gib but to graphically show the problem that we've got. If you build a house in America, it costs $9.33 and here it will cost you three times as much.

"This is why KiwiBuild hasn't worked because fundamentally you can't make any money out of it so no one wants to do this."

The houses have attracted a lot of attention - "it’s like a lolly jar" - but Houston tells The Detail's Sharon Brettkelly importing ready-made houses is nothing new.

"In the 1800s in Victoria they actually imported 22,000 flat packed affordable houses," he says.

The houses were put up to cater for the huge influx of gold miners.

"If we imported 22,000 houses next week, our housing crisis would be over. And that's essentially what we're going to try and do."

Today Brettkelly also speaks to NZME property editor Anne Gibson, who is less sure about the potential success of the homes.