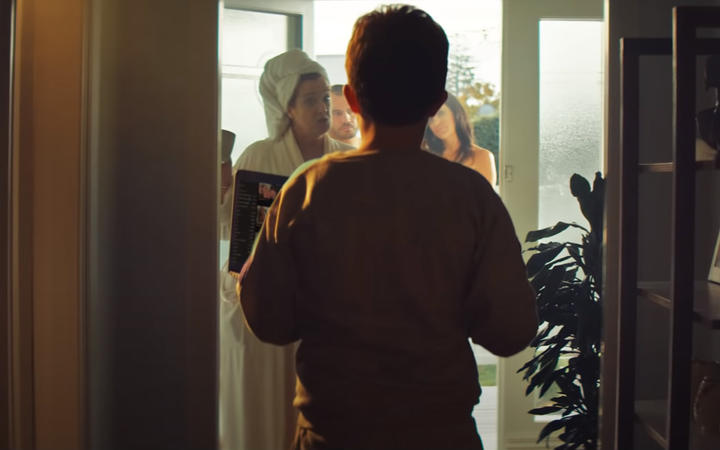 It has also kicked off conversations about pornography online that everyone has been avoiding for decades.

The Detail's Sharon Brettkelly talks to Hilary Ngan Kee from the agency about how the team came up with the idea of getting nude actors to knock on the door and tell a mum that her young son is watching them online.

"Quite early on we came up with the idea of: what would happen if they appeared on your doorstep, because that's essentially what is happening. They're coming into your home through a device," says Ngan Kee.

"The access to the internet allows access to anything, young people have more access to phones (and other devices) so they can view whatever they like. They do understand that pornography isn't real but at the same time they lack any other information about sex," he says.

"Anyone who has a perspective on pornography …. we can all agree that it is a terrible sex educator," Taylor says. The problem is, as highlighted by the study, children and adults aren't talking about it.

"There is problematic content out there that they can view, obviously, but lots of them are able to avoid that content," he says.

But they are making the distinctions in a vacuum without any other input.

"There's very few avenues through which to discuss it or to make sense of it beyond perhaps your peer groups," says Taylor.

He says that can change by introducing "pornography-integrated sex education" at a young age and by giving teenagers a chance to talk about sex, sexuality and pornography. "They will go for it" but teachers and parents have to get more comfortable with a topic that has been taboo for decades.

Parents who want help with bringing up the subject with their children can go to keepitrealonline.govt.nz.