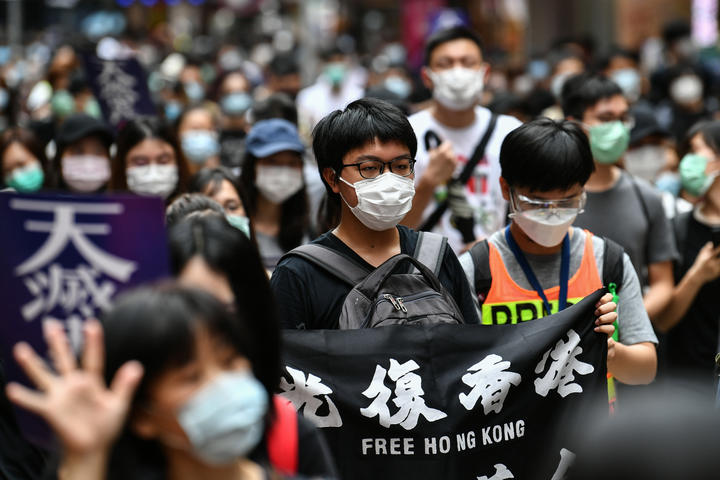 Protesters march on a road during a pro-democracy rally against a proposed new security law Photo: AFP

There’s no doubt that China has seized the opportunity of international distraction to sweep into Hong Kong.

Its National People’s Council will finish its annual meeting on Thursday with a rubber stamped security law that will virtually end the “one country, two systems“ framework of Hong Kong that has governed the relations between them for the past 20 years.

The process will effectively circumvent the Hong Kong government and undercut its relative autonomy.

The law, banning sedition, secession and subversion, will also stomp out the type of protest we’ve been seeing for the last year in which prominent activists have disappeared. It will criminalise foreign interference in Hong Kong – in other words, anything China doesn’t like. Calling for independence, or full democracy, in Hong Kong would fall into that category. International support would be deemed ‘foreign interference’ and protesters arrested as a result.

Watching it all from the unlikely location of Havelock North is Anna Fifield, a Kiwi who is usually the Beijing Bureau Chief for the Washington Post. Her American colleagues have all been expelled from the country, and she doesn’t know if she’ll be allowed back in once restrictions are over – “nothing is certain in China,” she tells Sharon Brettkelly in today’s podcast.

She says over the last couple of years China has steadily ratcheted up the pressure on Hong Kong and attempting to tighten its grip. “So this is a step that we could predict would happen – but the thing that wasn’t predicted, and is really surprising, is just how quickly all of this has been happening. That China has been moving so aggressively and with such impunity against Hong Kong.

“This is really Beijing acting to fully control Hong Kong,” she says.

“Over the past year we’ve seen these protests erupt in Hong Kong against an extradition bill, and that I think really caught the Communist Party chiefs in Beijing by surprise. The ferocity of the feeling there … it took coronavirus to bring these protests to a halt. And I think that must have been a real catalyst … they realised they needed to get a much stronger grip on Hong Kong.”

The island nation’s last British governor, Chris Patten, has called the move a “comprehensive assault on the city’s autonomy” and a betrayal by China.

New Zealand can’t be as bold in talking to its major trading partner – and it usually isn’t.

Fifield says when Prime Minister Jacinda Ardern visited last year she promised to bring up human rights transgressions, and she did – but behind the scenes, to avoid China losing face publicly. Deputy Prime Minister Winston Peters hasn’t been so circumspect, but he hasn’t been as strong as Patten.

“But so what?” says Fifield.

“China does these kinds of things with impunity, and they’ve proven time and time again they just will not listen to foreign criticism or to temper their actions whatsoever.”

Never a nation to let a good crisis go to waste, the mega-economy is aggressively expanding while batting off calls for an inquiry into how the Wuhan-brewed coronavirus started. It’s also making efforts to isolate Taiwan and ostracise it from the international community.

In The Detail today Anna Fifield fills us in on China’s ambitions and plans while it hopes people will not be looking as closely as normal, and tells us why the world is pretty much powerless to stop it.