What happens to a family stuck together in quarantine? 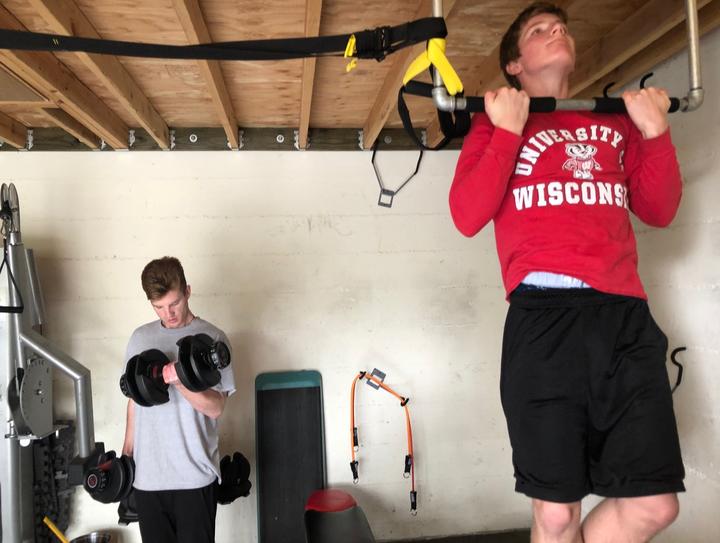 Cy and Jackson Coldiron confined to their home during the Covid-19 outbreak Photo: Jody Brettkelly

Like millions in the Bay Area of California, Sharon Brettkelly’s sister and her family are in virtual lockdown. In today’s podcast she Skypes them - Auckland to Oakland - to discover how they found themselves stuck in the house, and how they’re coping.

Their sense of humour may save them. Maybe.

It’s day four of Covid-19 self-isolation for Jody Brettkelly and her husband Kevin Coldiron, along with two of their four children, Jackson, 20, and Cy, 16. But it was day one of the ‘Shelter in Place’ edict from Californian state government – restricting people to their homes unless they have to go out for emergency supplies, with the exception of activities such as trail hiking that they can do and still remain socially distant.

“We wanted to implement a ‘group clean’ for an hour a day – it didn’t go too well, because the kids were cursing and swearing,” says Jody.

“Cy and Jackson were supposed to have classes all day but we notice the theme tune from The Office coming through. I’m not sure how rigorous those programmes are.”

The boys say they’re spending a couple of hours a day working out in the family garage, and doing online school work – although their version of their daily routine differs somewhat from what their parents are observing.

Jackson had a dramatic arrival back home. He was in Barcelona on a university exchange when the news alert came over that Donald Trump was closing the borders to travellers from Europe. Kevin scrambled to get him a flight, pulled him out of a bar at 2am, and within 12 hours he was back in San Francisco – dazed at the speed of it all.

“It’s kind of weird,” says Jackson. “I keep trying to tell myself it will get better but it’s getting worse and worse … honestly, it hasn’t dawned on me yet. It was like a flip of the switch – everything went crazy.”

He claims his parents are being “irrationally strict” about him leaving the house.

Like Jackson and Kevin, Cy is missing ‘March Madness’, the big college basketball fest that the US usually indulges in this time of year. (It’s all cancelled.) But he’s grateful his brother is stuck at home with him. “If it was just me and my parents I’d go a little insane.

“I might have to read a book or something, but it would be a serious last resort.”

Jody confesses elements of being confined to barracks are frightening. She had to drive to the local hospital the other day to get a prescription – the roads clear, the hospital empty. The Shelter in Place declaration seemed scary. “Now I’ve heard a rumour they might even ration water,” she says. She’s not sure why – “with the summer coming there’s going to be the return of the fires that we had last year so they may be thinking about that.”

At the supermarket, just as everywhere else, supplies are short. “The toilet paper – nobody knows why everyone’s grabbing all the toilet paper. Online they’ve even started making toilet paper that you can by with Trump’s face on it, so I’m sure that’s going to be pretty popular.

“Long, long lines in shops and it’s just like a swarm of locusts have been through and the only thing left is the broccoli.”

Kevin admits the hoarding impulse is strong – “it’s hard not to get caught up in it.”

Jody – “Day one or two and it’s 10 o’clock and you really feel like a Twix bar … and you start jonesing for this Twix bar that you can’t go and buy.”

Kevin teaches economics at Berkley CA, and was already doing that online. He describes the industry he’s involved in – the stock market – as “hair-raising”.

“I think there was just a vacuum of leadership for a while, the market recognised the extent of the problems well before Trump was ready to admit it …. and people are still trying to figure out what are the long term consequences?

“There is a real risk that it could snowball … is this a temporary six month recession, or are we talking about something that goes on much longer?”

Meanwhile Jody says the family is moving around the house like ghosts.

“It reminds me as if you were on a continuous long haul flight, and you kind of think ‘I can write a book’ or ‘I’m going to learn another language or learn how to knit’ or something like this … and then all you do is watch back to back movies and just eat all the time.”