Curiosity is killing the kea 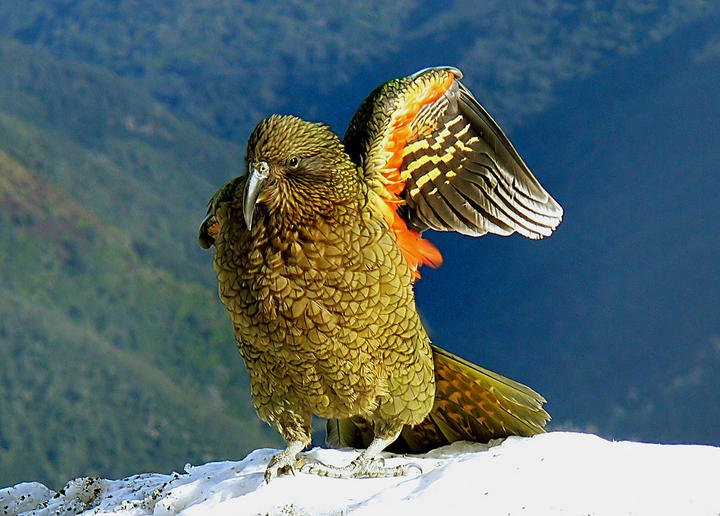 A new intelligence test involving Kea has confirmed what anyone who’s ever met one knows  - they’re clever – as clever as primates.

They’re engineers. They’re statisticians. They even predict the outcome of football matches.

But the kea is in trouble.

It’s hard to estimate how many live in the wild – they’re scattered widely and at low density across sprawling, forested areas – but our best guess puts the total wild population between 3,000 and 7,000 birds.

By comparison, there are more than 70,000 wild kiwi in New Zealand.

So, why is the alpine parrot disappearing?

“Early European settlers came here and put sheep on the land. The kea came along and would peck at the back of the sheep. That created a wound, and the sheep often died. So, farmers didn’t like them at all, and there was a bounty put on their head.

“You’d get a sizeable amount of money for bringing in a beak from a kea.”

After more than a hundred years, this policy was discontinued in the 1970s – but significant damage was already done: over 150,000 kea had been killed.

Now there are other, more modern threats  – largely stemming from the bird’s well-documented curiosity.

“A lot of old buildings up until the 1990s used lead nails, lead flashings … kea hang around on roofs and love playing with things.

“Because it’s soft, kea can twist it around in the mouths and their beaks, and they eat the lead – and it inevitably causes poisoning.

“It’s horrendous what it does … they either are affected so badly they lose their mobility and are hit by cars, or they actually die of the lead poisoning.”

But the main threat to kea these days is a familiar one: predators.

“Often, with a predator, when another species might think, ooh, a predator, I’ll run away … kea just decide they’ll investigate. They don’t run away.

“Their eggs can be eaten by stoats and rats. Possums or ferrets can actually take on a full-grown kea.”

So why is there so little awareness of the bird’s plight?

Part of the reason is market saturation.

According to the Department of Conservation, 70 species of bird are classified as vulnerable, endangered, or critical.

Michael White says this leads to jostling for space and airtime – a sort of conservation “hierarchy of need”.

“Everyone’s got their favourite species. But if you’re going to do a ranking based on [pure numbers] … that’s probably a realistic way of looking at it, but I think you have to look at it a bit more holistically.

“If you can help a species like the kea by controlling predators, inevitably you’re going to be helping a whole lot of other species as well.”