The different fates of Christchurch's Catholic and Anglican cathedrals 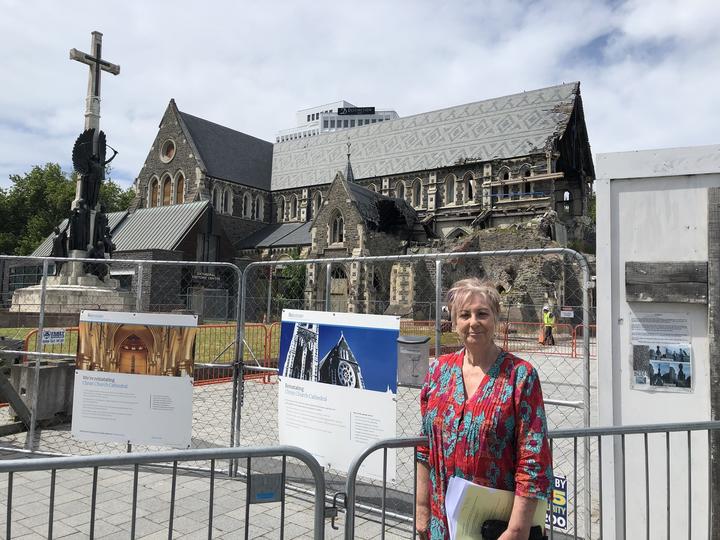 Anna Crighton with the ChristChurch Anglican cathedral behind her Photo: RNZ / Sharon Brettkelly

This is a tale of two cathedrals. It’s a story of two bishops, a tragedy and even a prince.

There's more than one battle in this long saga and only one of the cathedrals will have a happy ending.

Both buildings were severely damaged by the 2010 and 2011 earthquakes and aftershocks, and both sit derelict.

The future of the Catholic Cathedral of the Blessed Sacrament on Barbadoes St looked safe after the Bishop Barry Jones supported restoration.

Meanwhile, the iconic ChristChurch Anglican Cathedral in the city centre looked doomed after its Bishop Victoria Matthews opted to demolish and rebuild.

But several years after the disastrous events of 2011, their fates have switched.

The Gothic-designed ChristChurch cathedral will be rebuilt and its classical Catholic counterpart will be deconstructed and a new one built closer to the city centre.

The head of Historic Places Aotearoa Dr Anna Crighton is among the many people and groups that have fought hard to save the Anglican Cathedral in Cathedral Square.

"ChristChurch Cathedral is not only the centrepiece of Cathedral Square and our city, but it is our icon," she says. "It’s in our living room here.

"It’s the reason why the Anglican community was built here. So for seven years the Christchurch public have been fighting against the misinformation that it was beyond repair, that it was dangerous, they can't afford to repair it …. [that it was] an exciting opportunity to build a new cathedral and it would take too long to restore anyway."

After a bitter seven-year battle that involved the Church, the council, the government, community groups and residents, the Anglican Synod decided that the cathedral would be restored at a cost of $104 million.

It will be partly funded by the Church's insurance with grants from Christchurch City Council and the government.

Work has finally begun and it will take at least a decade to rebuild. For now, there's still a gaping hole where the pigeons get in, and the cathedral is out of bounds, surrounded by security fencing.

Just a few blocks away on Barbadoes Street is the Catholic Cathedral of the Blessed Sacrament. Its future looked safe until a few months ago when the new Bishop, Paul Martin announced it will be deconstructed and a new one built.

It is a Petre architecturally designed building, which was known as one of the most beautifully designed cathedrals in the Southern Hemisphere.

Crighton says it’s a Category One Heritage New Zealand building and the plan was to restore the nave, and mothball the rest to be restored as funds allowed. The cost was estimated at $150m. The site has been cleared, the pieces catalogued and ready to be used in the restoration. Instead of bringing in a demolition board, it will be taken down block by block.

“Everything was fine up till 2016,” she says. That’s when Bishop Jones died and the new bishop announced plans to move into the central city.

“As advocates for heritage we’re on the back foot,” she says. “We were lulled into this false sense of security that it was going to be saved. And then right at the last minute it’s not. So it’s such a challenge that I’m afraid despite my best efforts, we just can’t see our way clear to be able to save it.