Australia looking to sting back in battle over mānuka honey

Australian beekeepers are staking their claim over products branded as mānuka honey.

Small jars of New Zealand Mānuka honey are about to go on sale in the UK for nearly $3000 each.

The ‘super’ honey is collected by helicopter from remote parts of the North Island where there are heavy concentrations of Mānuka trees.

The high price is driven by a limited supply. A thousand jars only will be available exclusively from Harrods. While most of New Zealand’s Mānuka honey does not command such an extravagant price, there is strong and growing demand internationally.

The lucrative returns have seen a battle breakout over who should be able to use the word Mānuka.

Australia’s honey industry is defending its use of Mānuka labelling.

Callander says Mānuka seeds probably blew across to New Zealand from Tasmania. "It’s gone from Australia to New Zealand. It’s a native. We’ve got specific examples of geography and history.” 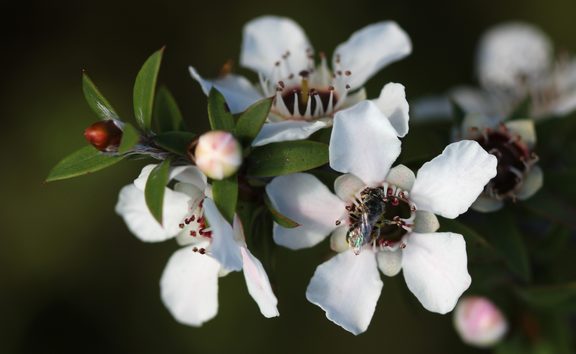 But the New Zealand government is siding with the local industry which is pushing to trademark Mānuka honey.

Through the Provincial Growth Fund, $5.7 million has been allocated to the Mānuka Honey Appellation Society, to help secure international property rights, as well as a $1.7 million loan.

The move would stop Australia and other countries branding their honey as Mānuka, locking out competitors from the world’s biggest trade market in China.

Australia’s honey industry is well established; there are state and federal-funded programmes scattered across the country.

And Callander says there is scientific evidence proving Mānuka trees in Australia are identical to trees in New Zealand.

“We collectively have been exporting Mānuka honey for over a decade, globally.

“It comes from the same plant that you have, it’ s been tested just the way you test it, it has exactly the same DNA and chemical markers.”

Australia’s case is hampered by the fact that Mānuka is a reo Māori word.

But Callander says there is a way around this too.

He says the Australian industry has tried to collaborate with its New Zealand counterpart for some time.

“We think partnerships are a much better way to go than fighting about a term but unfortunately, the MHAS (Mānuka Honey Appellation Society) has specifically declined our offers.”

“It’s a shame it’s come to this…the opportunity to work together would be substantial.”

While Australia’s federal government assesses if it should intervene, New Zealand’s honey industry is clear with its goal to own the Mānuka brand globally.

“It’s not shutting Australia out. It’s ensuring that the consumer is getting a product that they have previously purchased and recognised.

“It’s a truthful labelling situation it’s a certification marker that says two things. One, that it is Mānuka and two, that it's New Zealand.

Rawcliffe rejects the notion that Mānuka plants (leptospermum scoparium) in New Zealand and Australia are the same.

He says the Australian industry is trying to lump variations of the plant under the same Mānuka umbrella.

Rawcliffe says the DNA markers have scientifically proven to be different.

“To put it bluntly, they are misleading the consumer by calling all those other species Mānuka.”

Rawcliffe argues that where the Mānuka is grown plays a significant part in its branding.

“I can’t go to Champagne, grab a vine, plant it in the middle of Queen Street, and say that’s champagne, if I get some grapes off it.