When tourist spots are so hot the residents get burnt 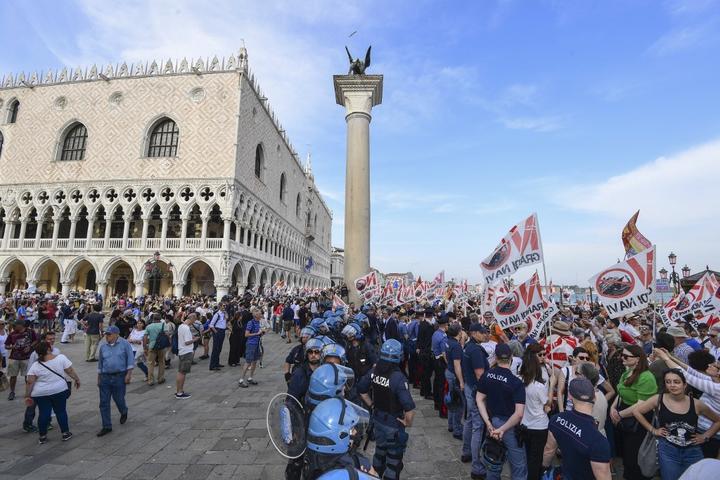 Police officers face people holding flags as they arrive close to San Marco square during a demonstration called by the No Great Ships movement against big cruise ships sailing into the Venice. Photo: AFP

Locals of the Lofoten Islands in Norway are fighting to restore their tranquility.

Word got out of the picturesque towns, nestled between fjords, with its photogenic yellow hilltop house.

A National Geographic article exposed the community to the world, and people came in droves – changing the place beyond recognition in five years.

Author of Overbooked, Elizabeth Becker says everyone is always on the hunt for the new “hot spot”. Lofoten Island residents are not alone in wishing to be left alone.

Cheap air fares, a growing global middle class population, promotion on Instagram and other social avenues have all contributed to an issue that’s seen Venice drowning in cruise ships, the Inca trail become a highway, and New Zealand’s own Roy’s Peak turn into a selfie queue.

In Norway, “all of a sudden, [Uttakleiv] beach is crowded beyond belief – a village of nine people has 250,000 visitors a year,” says Becker.

They weren’t equipped for the influx of tourists.

“[Tourists] had tremendous medical bills; helicopters going up to pick up young hikers who fell or snorkelers who weren’t prepared.”

And a 500-year-old rule allowing for the freedom to travel prevented locals from stopping them coming.

In lieu of infrastructure, tourists had to create their own accommodation, and travel agencies took advantage of the tourism boom.

“They stayed on the beach and the beach became impassable” says Becker.

“Some of the travel agencies figured out how to make money by setting up fancy tents and port-a-potties.”

However, locals are not benefitting from the boom; travelers aren’t required to pay taxes and the beach quickly became off-limits during summer.

Becker says residents are “subsiding these tourists who are making their lives miserable”.

They’re having to define the limits of the tourism they can support; similar sentiments have been echoed in Queenstown and other popular destinations in New Zealand.

Becker says there’s no shame in defining limits, “It’s like giving a dinner party for 12 people and 2000 people show up.”

She says freedom camping isn’t a feasible option and locals will bear the load of it.

“You’re subsidising, there’s nothing free about it.”

And if you’re unlucky enough to be on the tourist trail – like the residents of Dunedin’s very steep (but now not the steepest in the world) Baldwin Street – it’s a real problem.

Sue Marshall feels like she’s been invaded every day, to the extent that she’s made a short film about her situation. She has turned around inside her house to find people have wandered in uninvited through an open front door. Cars are constantly trying to reverse at the top of the road to get back down. People tramp through their gardens.

The fact that tourism is New Zealand’s top overseas exchange earner is no comfort.

“It’s not Disneyland!” she says. It’s just a very steep street. And if residents thought the heat would come off after the discovery of a steeper street in Wales – not so. If anything, the number of visitors has increased.