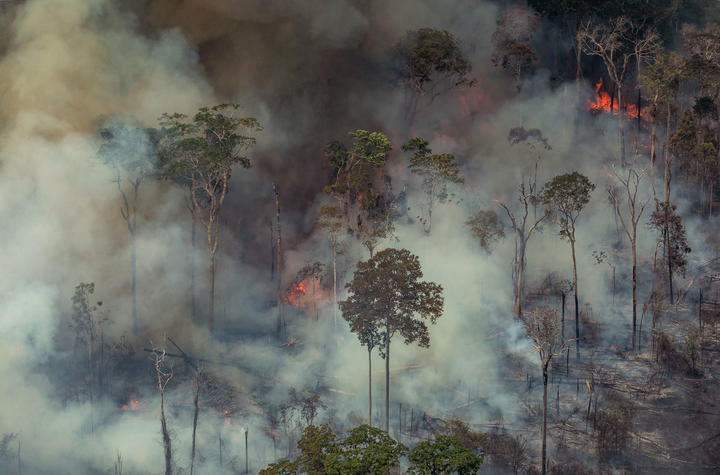 Global angst about the burning of the Amazon may finally have sparked a reaction from the government that’s accused of fanning the flames.

It comes after G7 leaders meeting in France put the fires firmly on their agenda – and after the Brazilian president copped criticism internationally for opening the way for farmers to burn the forest.

Smoke from the fires cast a pall over Brazil’s biggest city, São Paulo, over 2700 kilometres away.

Photos - some outdated - created controversy on social media, were shared by celebrities and re-shared by users drawing attention to the fires.

Ecologist, Dr Jon Sullivan from Lincoln University says the rainforest itself is nothing short of amazing.

“It’s called the lungs of the world because it makes about a fifth of the world’s oxygen.

“A fifth is a pretty large portion to be coming out of one part of the world’s forest.”

He says aside from producing oxygen the tropical rainforest is home to one in 10 species of animals and plants on the earth.

While fires are common in parts of South America, there has been an 80 percent increase in fires in the last year.

More than 72,000 fires have sparked across the Amazon basin and environmentalists are pointing the finger at Brazil’s administration.

Under the country’s newly elected President, Jair Bolsonaro, rates of deforestation have soared. It’s estimated 88 percent of that deforestation is because of cattle ranching.

When Norway and Germany cut millions in environmental funding to Brazil, Bolsonaro scoffed and told German Chancellor Angela Merkel to mind her own country.

Bolsonaro has reversed regulations that had prevented deforestation.

Dr Sullivan says Brazil, like most countries, is trying to make ends meet and keep its economy growing.

“Just like New Zealand has done in its past as well, the forest gets cleared to make way for agriculture.”

Dr Sullivan says 1.6 times the landmass of NZ has been deforested to make way for agricultural land.

“The main way the people are clearing forests is to burn it off.

“This is the worst time for this to be happening too.

“Forests are made of carbon, 90-140 billion metric tonnes of carbon are locked up in the Amazon basin forest - the world does not want to be releasing carbon into the air right now.”

According to the WWF, deforestation caused by cattle ranching is responsible for the release of 340 million tons of carbon each year – 3.4 percent of the current global emissions.

“Wood is primarily made of carbon so when those trees burn carbon enters the atmosphere,” says Sullivan.

Environmentalists are warning this is just the beginning of the dry season and deforestation will only further weaken the Amazon basin.

But Bolsonaro is also juggling the needs of the Brazilian people, where millions are living in extreme poverty.

The concerns of environmentalists have so far fallen on deaf ears, with Bolsonaro firing the head of Brazil’s National Institute for Space Research when presented with statistics on the increase in deforestation rates.

Scientists are now looking at a new risk; the Amazon’s tipping point – if a further 3-8 percent of the basin is destroyed, the forest could stop growing back.