How to sink $4.4 billion underground 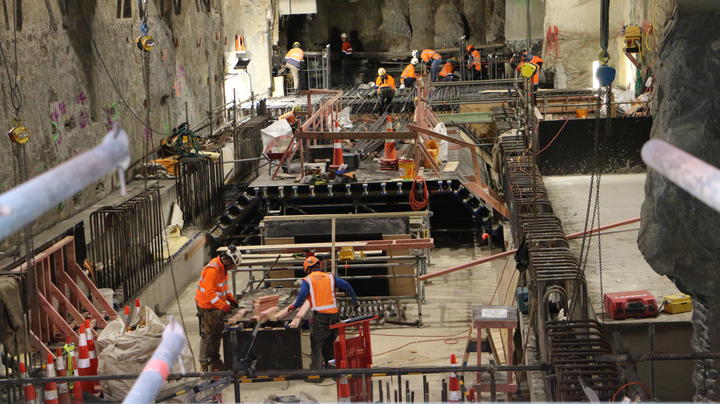 The need for four safety officers to flank our small group should have prepared me for the huge operation that is Auckland’s new underground rail system.

But standing at the junction of Tyler and Commerce Streets, wide screens shielded me and the public from the gaping 20-metre deep holes in the road which are filled with elaborate contraptions of steel and cement.

Before I have a chance to adjust to the heaviness of my steel-capped boots and hard hat, we’re whisked into the building site, onto a make-shift balcony to have our first look over the tunnels that will form the City Rail Link.

It didn’t take long to feel grateful for the safety officers and the high-visibility vest - my usual juggling of recording devices and camera, a definite hazard on the jungle gym of scaffolding. I had gone where no nerds belong.

After we’re granted permission to climb down into the tunnels, a woman in our group says she’s scared of heights while peering down at several levels of metal stairways we have to descend.

Even without the phobia, I relate to this woman with her death grip on the railing.

We pass orange-clad men - and one woman - who tip their hard hats while carrying heavy materials up and down the stairs with ease.

Within a couple of metres of the entrance we lose daylight. The sound of drilling, and fans ventilating the space, is thunderous.

And then without warning, we round a corner and panel after panel of temporary lighting illuminates a sleek, grey tunnel.

A safety officer shrugs and yells, "sorry, it’s not much to look at".

The officer tells me workmen are moving a steel structure along makeshift rails – metre by metre of the tunnel, inspecting it to ensure the space is up to code.

They’ll have to retrace their steps and fill any small holes they’ve drilled into the concrete at the end of the operation.

Not reading my already gob-smacked face, the officer assures me the real feat of the operation is the fact they raised the old post office, now the entrance to the train station, in order to build tunnels under it. 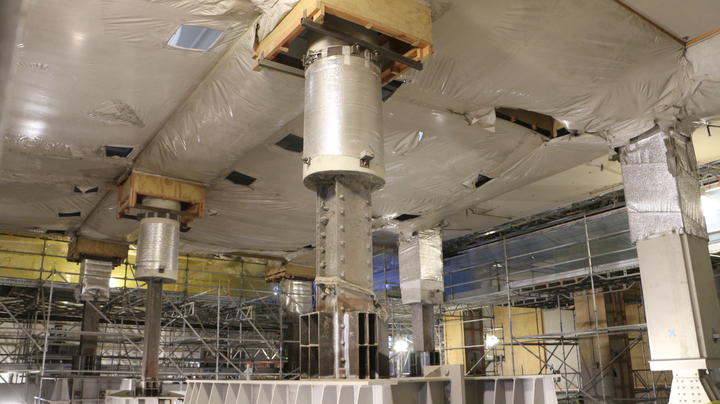 Architects had worked out a way to raise the 106-year-old building weighing 4000 tonnes before slowly lowering the building onto metal beams.

They raised it up by five millimetres and it dropped back four – described by CRL CEO Sean Sweeney as a triumph of engineering.

Today, workers bustle beneath the building, under fluorescent lights – focusing on the next step in the five-year process of finishing the job.

I’m not sure they know the weight of their work; soon, trains filled with thousands of commuters will shoot across lines they built. It will double the capacity of the entire rail network, up to 54,000 passengers an hour at peak times.

It takes a few minutes for your eyes to adjust to the light when you leave the tunnels but my mind - yet to recover.