Sudan: The massacre you missed

"Give Sudan the same energy y’all gave that empty building in Paris" was the post slowly spreading through Instagram. 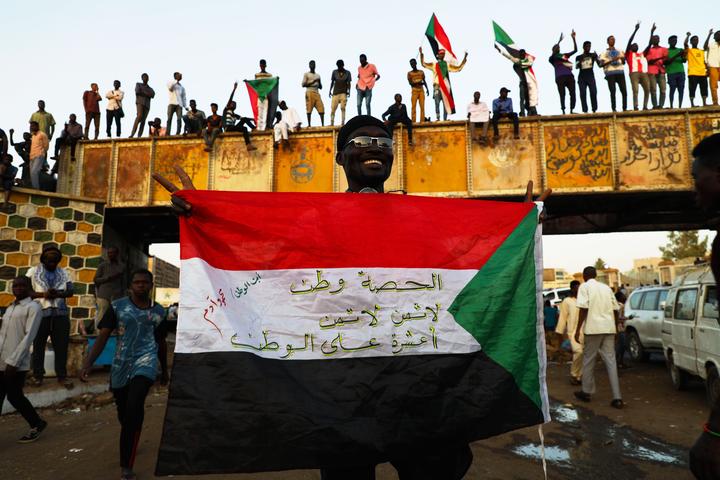 A google search will bring up sporadic news stories of a massacre, hindered by an internet and media blackout in Khartoum.

The hashtag #BlueForSudan started trending on Twitter with civilians sharing footage of military forces breaking up the peaceful sit-in, where people had been protesting for democracy.

But events there largely passed mainstream media by. Instead, celebrities including Rihanna, Cardi B and Naomi Campbell were posting on social media to raise awareness.

In April, Sudan’s President Omar Al-Bashir was ousted. The country had been under his fundamentalist dictatorship for 30 years.

Al-Bashir is an indicted war criminal, wanted by the International Criminal Court for the genocide in Darfur.

He was betrayed by his right-hand men: General Abdel-Fattah Al-Burhan of the Sudanese military and his deputy Mohamed Hamdan Dagalo, better known as Hemediti; the head of the notorious Rapid Support Forces (RSF).

They told news outlets they had sided with civilians and the Transitional Military Council (TMC) would only be an intermediary power for three years.

Civilians continued to protest, taking to the streets and picketing outside the military offices in Khartoum. Pro-democracy groups say they want elections to be held and civilian-led political parties in charge.

On 3 June, the RSF gunned down hundreds of people, there are reports of rape of women, men and children, and the TMC is being accused of dumping bodies in the Nile to play down the rising death toll.

And then the country went dark; journalists reporting the atrocities face the death penalty and access to the internet has been cut.

Alaa Muntaser works for a community group helping to organise pro-democracy protests. She takes two days to respond to an interview request because she has to travel to access the internet.

She says the Sudanese diaspora played a very big role in spreading the news of the massacre.

“Especially during the first couple of days, people were constantly calling and [texting] and then they would spread it online.

“So they have been very unsuccessful at hiding the atrocities and their crimes.”

Muntaser was ill the night before the sit-in. She had planned to visit the protest site, outside the military offices, the next morning.

She woke up to the chaos.

In the days following the massacre, the RSF roamed the streets of Khartoum, threatening, beating and raping citizens. Muntaser says people were afraid to leave their homes for weeks.

“You’d go out and you’d get shot, you’d get beaten up for absolutely no reason.”

She says of the RSF: “It’s like they had no rules, they were given the green light to teach people a lesson.”

Muntaser says the RSF has retreated from Khartoum and things are returning back to normal. The forces painted over protest art, “it’s like they [the protests] never happened.”

But Muntaser says the protests won’t be silenced for long – the people want a democratic system.

An Ethiopian envoy has suggested the creation of a 15-member governing body made up of eight civilians and seven military members; putting the power back in the hands of the people.

While the TMC has rejected the proposal, mediation is taking place.

Social media posts from both civilians and the diaspora have a recurring message, urging the international community to raise awareness and step in.

Muntaser pleads: “It’s very important the international community doesn’t move on from what has happened.”