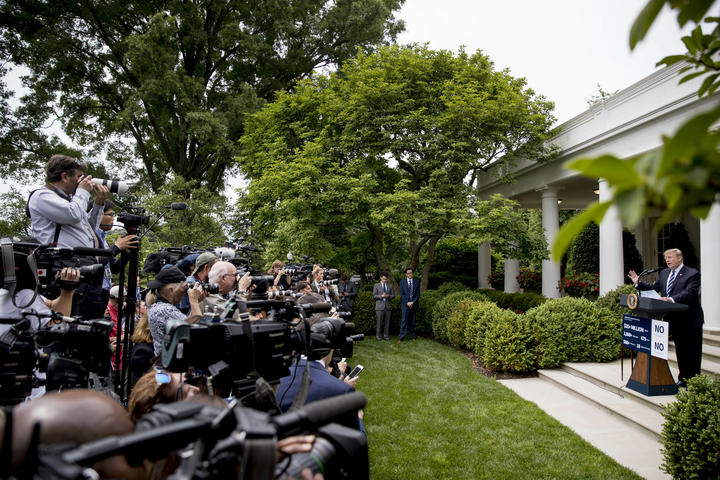 If you want to see a White House press briefing in progress these days, your best option is a Saturday Night Live spoof. They don't happen anymore - there's now been no live TV coverage by the networks for 102 days - and counting.

From the White House press briefing room President Nixon defended his honour, President Clinton and his press secretary were questioned about the Monica Lewinsky affair and there have been many history-making statements about events such as military strikes.

But it is under the three years under the Trump administration that the press briefing has taken many more twists and turns.

Politico’s Josh Gerstein has been covering the White House since the Clinton era. He says the briefing is typically a 30 to 45-minute opportunity for Washington reporters to put questions to presidential press secretaries. On a typical day, 50 or so reporters cram into a relatively small room just metres from the Oval Office – when something big is happening you can double that number.

The press briefing room was formerly a swimming pool, used most often by President Kennedy.

“There’s certainly a lot of history that’s been made in the room,” says Gerstein. “The atmosphere varies from whether you’re talking about a languid Friday afternoon, or the White House seems to be in turmoil and someone’s job is on the line.”

Highlights have included a surprise visit from a president to take questions from the press. Some of these announcements have involved a huge surprise. Gerstein says it’s been a good way of taking the temperature, up until the last few months.

Trump has never really been satisfied with the exchanges, he says.

“He sees them more as creating a spectacle …. and the White House doesn’t have that much control.” Gerstein says it seems to him that at different points the briefings have shed “more heat than light” on the presidency, with some “wildly dubious, inaccurate assertions” coming from Trump press secretaries.

The time spent on the briefings had been dwindling. Gerstein says under Sarah Sanders they got down to 15 minutes and half of that time went into “self-serving statements” and the president criticising the questions or the answers.

Sanders has now quit as White House press secretary and is seriously looking at running for Arkansas governor. There’s no word yet as to who will take her place.

Gerstein says under Trump the events have had dubious value other than entertainment. “The statements from the Trump White House are not particularly useful in terms of trying to find out what’s going on,” he says.

“Some of it doesn’t even involve lying. It involves officials saying ‘here’s our position on x’ and 15-20 minutes later you have the president tweeting out something completely to the contrary.

“There’s a pretty big disconnect between the rhetoric and reality when it comes to what’s going on behind the scenes.

“There was a lot of drama in the very early days. It shows how Trump was trying to micro-manage and how the press was so incredulous.”

Remember Kellyanne Conway, the US Counsellor to the President, defending his press secretary Sean Spicer when he overstated attendance numbers at Trump’s inauguration.

She famously used the term “alternative facts” to back Spicer, and never lived it down.

But Gerstein doesn’t believe it’s the end of press briefing, and says the significance of their demise is overstated.

“You can exaggerate the significance of it to a degree. It’s not as if the president is in a cocoon. Trump’s out there all the time and he takes questions from reporters fairly often.”

He thinks the holy pulpit of the press briefing might become more useful to the president in the lead up to the elections.