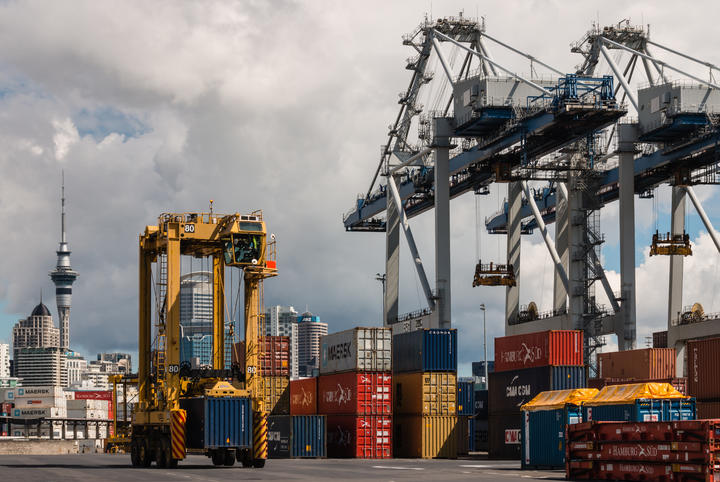 Every year roughly 300,000 vehicles land at Ports of Auckland, 1500 ships call, and almost 1 million containers pass through. No wonder it’s bursting at the seams.

Everyone seems to have an opinion about its future -  the cars should be moved to Northport; the whole operation should all be moved and replaced with a stadium, apartments and parks; the city wants it to stay; Auckland needs the income.

The port supports 700 workers and another 160,000 jobs are estimated to hang on the port’s operations, including freight forwarding businesses.

A working group is due to report back to the government this month on the future of freight forwarding in the upper North Island. Creating a vehicle importing hub at Northport is one of a dozen options it is looking at. The group will give more detailed costings and recommendations in September.

The NZ Herald's Auckland specialist Simon Wilson says the port is outgrowing its site and in 20 years will have to start thinking about moving – the move might take 50 years.

In 2017 the Ports came up with its own 30-year-master plan for its future. Chief executive Tony Gibson says it’s what the city wants but critics say they’d prefer parks, public space, or developments that will return more money for the prized waterfront land.

Despite opposition, the Auckland Council backed the plan and the Ports is pressing ahead with plans that include a new carpark.

The Ports' latest interim report, for the six months to December last year, shows the number of cars through the port fell nearly 17 percent to 124,000 compared with the same period the previous year.

POAL blames declining car sales and the arrival of the brown marmorated stink bug on vehicle ships from Japan. The pest is a major threat to horticulture and steps taken to keep the bug out disrupted vehicle imports.

But Wilson says the transition to electric cars will also make a big difference to the Ports' operations. One of the explanations for the current dip in imports is because people are waiting till the next wave of technology makes electric cars cheaper.

Wilson says we don’t know what will happen with the future of electric cars – we may even be able to manufacture them ourselves with 3D printing.

Sending cars to Northport just outside of Whangarei city is a pet project for New Zealand First.

It got a bit of a nudge last week when Kiwirail was urged by the government to apply for funds to fix Northland's ageing railway lines. Winston Peters, when questioned about the damage to State Highway One that would be done by dozens more trucks every day hauling cars south, said upgraded rail lines would solve that problem.

Wilson says moving the cars to Northport will not only boost the region but free up prized waterfront land.

He’d like to see a stadium or museum there – and says the return from a retail and residential development would bring in far more than the annual $50 million dividend the port pays its owner, Auckland Council, every year.