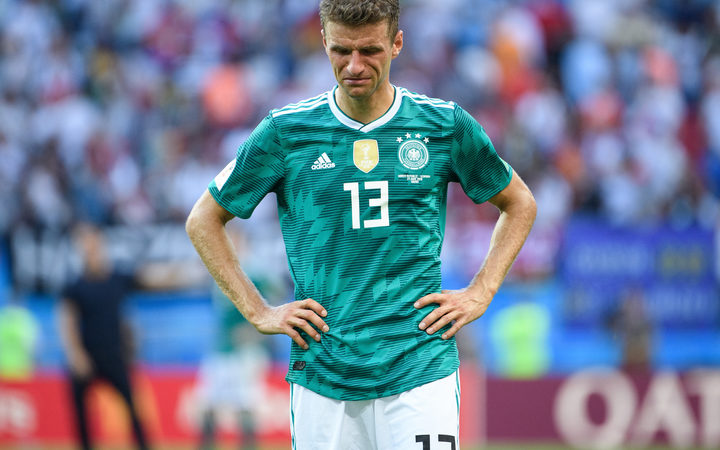 How do we make sense of that?

The group stage of the FIFA World Cup is over and we can all breathe again.

The tournament so far has been as dramatic as it has been unpredictable - from Germany’s shocking early exit, to Argentina’s even more shocking survival.

There have been 24 penalties, six more than during the duration of any other World Cup, eight own goals - again, a record - and for the first time, every team managed to score at least two goals.

In the latest episode of Squeaky Bum Time, RNZ’s World Cup podcast, hosts Emile Donovan and Max Towle are joined by The Totally Football Show’s Iain Macintosh to somehow try to make sense of the chaos.

Just this morning, Macintosh’s team, England, lost narrowly to Belgium in a game both countries appeared to want to lose in a bid for an easier route to the final. Credit to England, they just wanted to lose it more.

“I’ve felt like the only person in the country pleading with England to play their strongest team - there’s literally nothing bad that can come from topping a group having won every game - it provides such a buzz - now my buzz has been killed,” says Macintosh.

“In football, if you’re in any doubt, as Bill Shankly said - put it in the back of the net and we can discuss your options afterwards.”

Elsewhere, Senegal were eliminated after finishing on exactly the same number of points, goals for, and goals against as Japan, but with a worse disciplinary record.

“I would much rather see a standalone penalty shootout. Deciding a team’s fate on yellow and red cards is unreal.”

Also in the episode, RNZ’s economics correspondent Patrick O’Meara joins to pour scorn on Donovan, who picked Germany as his tournament favourites, and to determine the correct pronunciation of Emile’s name.

You can subscribe to Squeaky Bum Time on the podcasts page on radionz.co.nz, and on iTunes and Spotify.