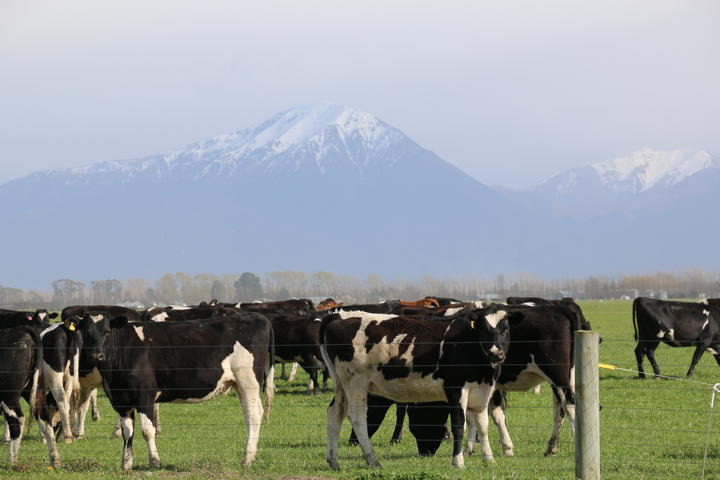 The north of the North Island has had a big dose of rain and West Coasters are looking skyward for sun...

On Bay of Islands farms in Northland it's been very wet - the district's had 840 millimtres of rain since the first of June. However it's needed after two dry summers depleted soil moisture. On one farm beef cow calving was supposed to start on the 20th of September but the farmer says the bull must have spent a couple of days sauntering because none have arrived yet.

Around Pukekohe mild weather and good rain have spurred strong spring growth in veggie crops.  When it was fine earlier in the week outdoor growers were busy with their machinery and staff planting brassica and salad crop seedlings. That all stopped when 70mm of rain saturated the ground from Thursday to Friday morning.

Between 6 and 9 on Wednesday evening near Tokoroa in Waikato, 61 millimetres of rain was recorded and a bit more later. One farmer reports he had flooding in four places on his road and also across races and driveways. He has 20 cows yet to calve out of 960.  Soil temperatures are not flash and people are looking forward to sunshine and better grass growth. The first silage of the season was harvested in the first week of September on a property dedicated to grass-silage and maize. 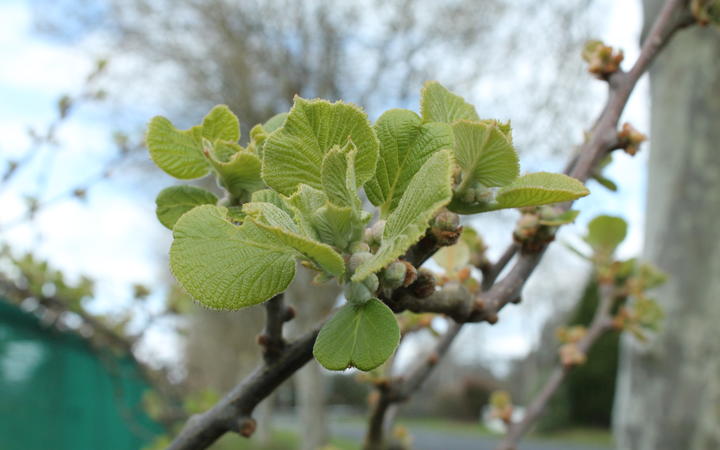 Bay of Plenty has had a good dollop of rain too. Bud-break is happening on kiwifruit orchards and one grower was very relieved to finally have finished pruning his green vines. He says restricted work in, and travel out of Auckland has meant steel fabricators haven't been able to get on with building and transporting components for cool stores and grading lines.  They were due in November and now they're scheduled to arrive in February. It's a worry because you can't delay picking for two months!

Early docking numbers are looking good in King Country.  An ag consultant says farmers in King Country, Taupo and the central North Island  are reporting that pasture growth seems to have shut down recently - farms have gone from being ok for feed to being in a tight patch. There was quite good growth in winter and one possible reason is that pastures have used up the nutrients available to them.  It's a bit of a predicament because it's too late to put on nitrogen. Farmers could sell a few stock but grass growth will probably bounce back and then they will need the mouths to eat it.

Hawkes Bay's been enjoying some lovely sunshine but could do with a bit more rain. The grape grower we called has been weed spraying his vineyard and is in contract negotiations  with wineries - talking about the volume of fruit they require and the price they will pay. It should be an ok year this year because Marlbourgh grapes were in short supply so fruit is in demand - and with covid, people are busy buying wine on-line and some wineries are running low on stock. 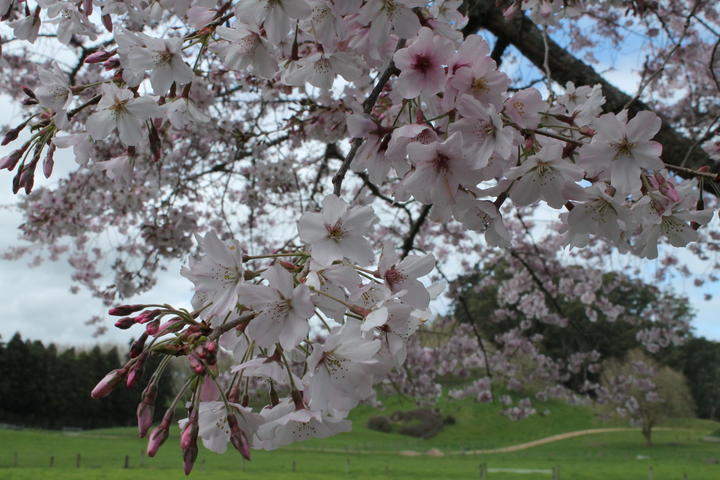 Wairarapa was expecting 20 degrees on Friday. Sheep farmers are saying there've been low ewe deaths, high lamb survivability but bugger all grass.  There's not enough feed.  It has been cold and this year's also been a shocker for grass grubs and porina caterpillars - the grubs eat the roots and porina the grass.

In the Tasman region there was heavy rain on Thursday causing a lot of surface flooding … often the region misses  or is only clipped by predicted rain but the front hit at a perfect angle.  More than 100 millimetres fell which our contact says wasn't really needed, although you don't turn up your nose either. Grass is starting to grow and hopefully within the week supply and demand for pasture will be equal… although it is variable over the region. Calving is quietening down while on sheep farms some are tailing but others are still lambing.  Results appear reasonable but not wonderful.

A farmer at Seddon welcomed the rain this week.  Grass growth is still a bit slow, but after a good winter he says spring looks to be a lot better than last year. When we called the conversation was interrupted with dog control commands as he was getting the last of last year's lambs onto a truck to the works .. he says they're looking good and the prices are too so he has no complaint. His grape vines were all pruned and large contracting gangs will be through all their planned work within a few days.  He says they'll likely go on to help other vineyards which have struggled to get pruning labour.

West Coasters haven't seen any sun this week. The ground is sodden and for grass to take off more sun is needed.  In the north of the coast 300 millimetres of rain fell in  August, 140 have so far this month and those down around Fox will have had up to double those figures.  These farmers need lots of silage on hand and they don't carry high stock numbers. Some of the gravel based pastures however can have sheets of water flowing over them in the morning and be driveable by the afternoon, so things swing quickly.  Cows are milking okay with the help of supplements. 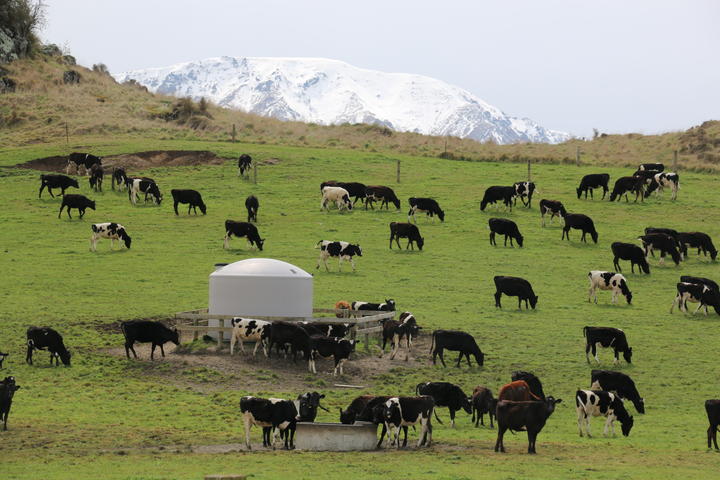 Canterbury enjoyed  a good week of weather which has seen an improvement in ground conditions allowing farmers and contractors to get on with sowing Spring crops and new pastures. Pasture growth is starting to move which can't come soon enough as many are short of feed at the moment. On dairy farms caving is well through with only late calvers to go.

The sun was shining in south Otago on Friday morning and grass was growing at long last and the spring corner is being turned and farmers are looking forward to everything kicking into gear. Our Balclutha farmer says they need all the grass they can get as it's been the longest winter he remembers … he started feeding out in March because it was so dry and he's only finally stopped now because there's enough grass for stock to feed themselves.  Ground is still very wet so it will be a few days or more before crops can go in. He's not expecting a fancy lambing percentage because scanning figures were lower after a lack of feed during mating, but he says on the other hand lamb deaths have been low.  He's waiting for the school holidays before starting tailing … more helping hands on deck.

The sunny days continued down to Southland this week. Some farmers are still going with lambing so it's been lovely for that. Apart from a cold snap a fortnight ago lamb deaths will have been minima this year.  Feed is a bit tight in places but with longer days now arriving grass will start to get ahead of demand. Western Southland's had lots of rain so crops can't go in yet, in fact our farmer says even a sniff of a tractor leaving the barn seems to make it rain. 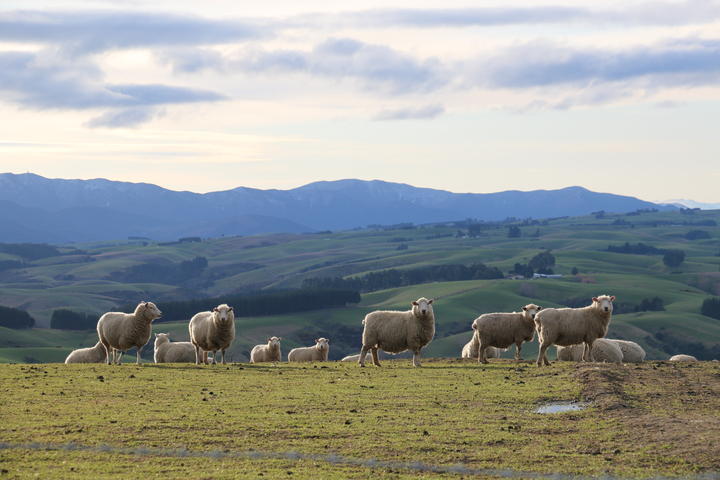