Newborn lambs in Wairarapa welcomed the sun on their backs at the end of the week after a wet start to the week. In Southland, calves are starting to appear across the countryside. On the Farm is a weekly wrap of conditions on farms and orchards around the country. 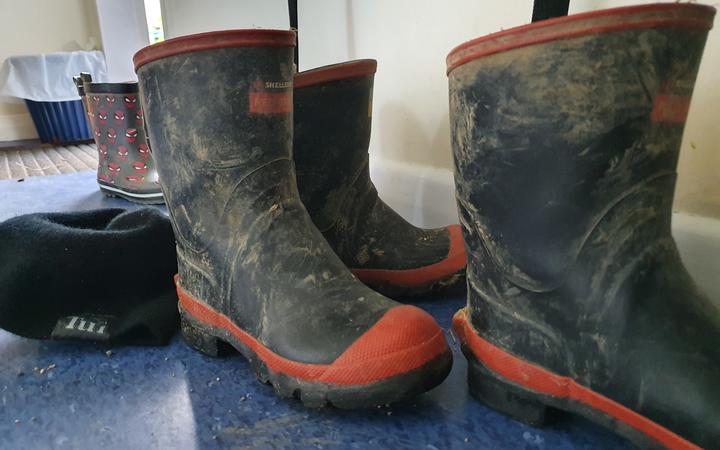 Country kids' gumboots in the cloakroom at Makuri School Photo: RNZ/Sally Round

It's back to normal as far as winters go in Northland ... wet. Grass growth has slowed. A sheep and beef farmer in the far north had about 50 millimetres of rain in the space of two hours causing some flooding damage. The wet is causing problems for pasture and more dry days are needed. He's almost finished lambing. After two dry winters in a row, they're under pressure to carry heavier cattle to cover rapidly rising costs - rates, diesel and the like. More weight on stock puts pressure on pasture but the farmer doesn't want to push the farm too much ... it's a real challenge. A stock agent says they're just about through the bull sales with prices back a little.

Around Pukekohe, a wet start this week delivered at least 40mm of rain and kept fields in a waterlogged state. Improving weather though by the end of the week is likely to provide opportunities to get onto the ground especially where vegetable seedlings  need to be planted.

Waikato has been very wet over the past ten days and conditions underfoot have become tricky on dairy farms which are on the heavier soils. Average pasture covers are on target as is cow condition. Farmers are busy working with their spring rotation planners to ensure they get to balance date when pasture growth rate increases to meet feed demand. Our contact says, for him, that's around September 10. Farmers are in the thick of calving. Because of the shortage of labour, they are working around the clock - calling in family members and others to lend a hand. Everyone is optimistic about the payout for the season. 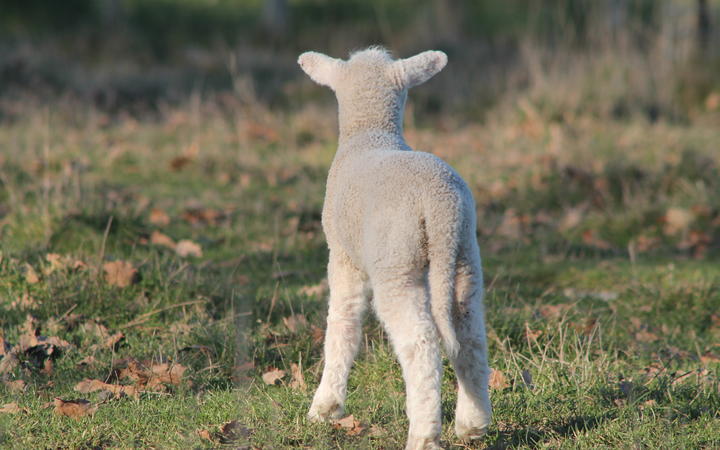 July's rainfall in Bay of Plenty will end up being 220mm above average but they were drying out a bit by the end of the week. Our contact says they're about a quarter of the way through calving. While it's damp, cows are in good condition and pasture's good. Most of the gold kiwifruit pruning is coming to an end. It's been tricky with all the rain. With almost no RSE workers and working holiday visa holders heading back home to an increasingly vaccinated Europe, our contact says the labour situation is not going to get any easier.

It's reasonably dry underfoot in Hawke's Bay so farmers are getting through winter fairly well, although there's no surplus feed around. Some farms have bounced back well from the dry autumn and are looking green and productive. The effects of the drought are lingering on others and it shows up when a farm's under pressure in the winter. Lambing is underway in some parts of the region but August/September is peak lambing time for most. Ewe pregnancy scanning rates are down a bit but our contact says they could have been worse if farmers had not been so proactive handling the drought conditions.

It's been very soggy on the ground in Taranaki and cows and farmers are looking forward to the predicted four days of sunshine. Some have started calving. The labour shortage is not as bad as in other regions. Cows are in good condition. Mt Taranaki has a light to moderate covering of snow. There's positivity around the payout tempered by general frustration among farmers vented in the Howl of Protest recently which saw a good turnout of younger farmers.

Our contact in Manawatū was drenching hoggets when we called. They scanned at over 90 percent and he will be sending the dries off to the works to make the most of their high value at the moment. His ewes scanned amazingly well - at 190 percent it's the best he's ever had and he's wrapt. After ten days of frost and cold  this month, it now feels like spring's on the way. Those early spring jobs are underway and a helicopter was out spraying for thistles when we called. 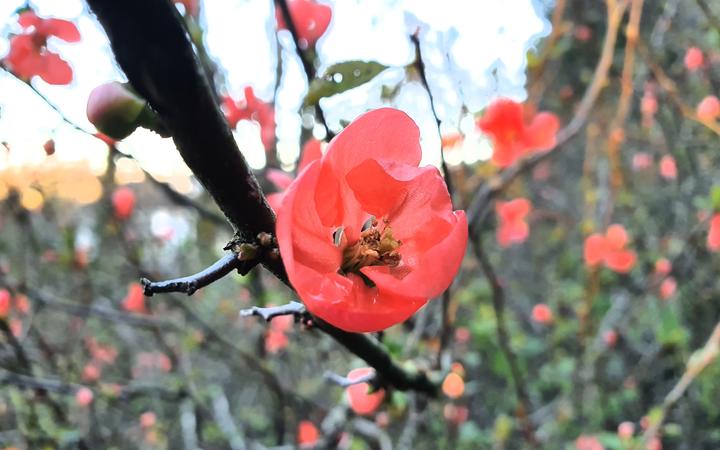 First signs of spring in Wairarapa Photo: RNZ/Sally Round

New born lambs in Wairarapa welcomed the sun on their backs at the end of the week after a wet start to the week.

A Nelson hop grower at Tapawera say the farm is in winter maintenance mode.  Wire and cables are being strained ready for running the strings up  - this is what will carry the next season's crop of hop bines.  In the hop shed, the drying kiln and hop picking machinery are getting checked and made ready for the next harvest in 2022.  Field preparation for new varieties of hops to be planted shortly is underway. The grower says this is an expensive but exciting part of the business. The new varieties of hops have been developed over a number of years and will offer the craft beer industry fresh and tasty options. There's been significant rainfall in the area along with some warm sunny days. Some good hard frosts earlier in the winter chilled things down which is considered beneficial for strong hop growth in spring and summer.

The Marlborough Sounds have been challenged with the recent weather event taking out the one and only access road for around six weeks. There are close to a thousand residents affected including farming communities. On our contact's farm at Titirangi Bay, around 600 ram lambs have to be trucked out before lambing begins towards the end of August. They have been waiting for the only local meat plant to re-open after its winter maintenance program. The closed road means the need to return to the old ways of barging livestock. These lambs will be barged out to Havelock and then loaded onto trucks for carrying  through to the Stoke plant near Nelson. Unfortunately this adds another $4000 to the cost of transport. The hope is once the road is re-opened there'll be a much improved and more reliable access road in place for the future. The farmer says ewe pregnancy scanning results have indicated there will be many more singles than usual, which he says could've been the result of the sudden dry hitting prior to tupping. Singles can be almost as profitable as twins because of potential losses due to poor weather at lambing in the twinning mob - while the single born lambs don't suffer the same losses and should be ready to go directly to the works at weaning time. 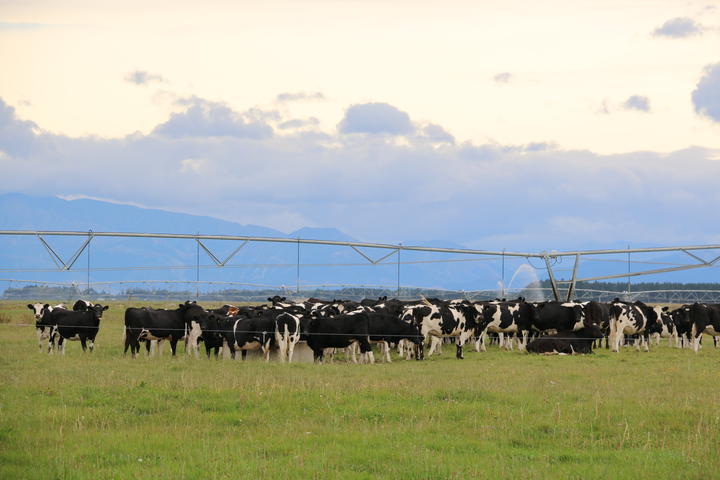 Our contact at  Barrytown on the West Coast has been fixing fences along creeks damaged by the recent flooding. Fortunately conditions have dried out a bit now that calving's begun. He's got 20 calves on the ground already. Tankers start picking up milk on August 1,  but some farmers won't be ready for a pick up as they need at least 500 litres in the vat before the tanker will come.

It's been a good week in Canterbury with only 20mm of rain this week. Ground conditions remain wet though and cultivation and sowing is backing up. When conditions come right there will be a flurry of activity. Calving is starting on dairy farms and very early lambs are arriving. 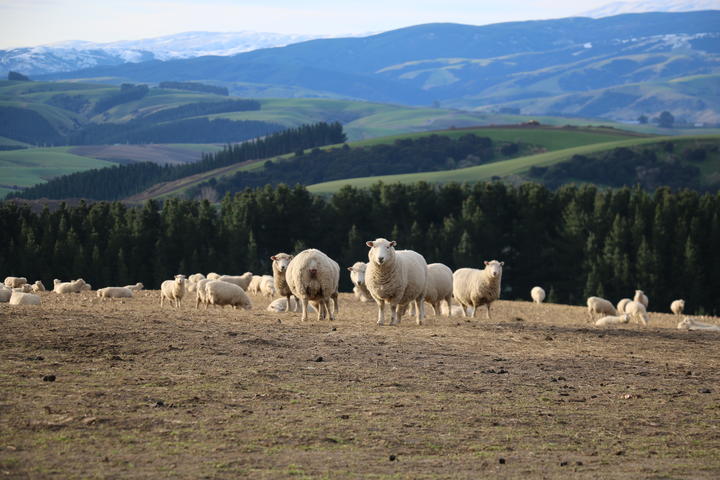 The Taieri Basin in Otago has been fine and frosty this week. The dairy farmer we talked to says he's hoping it's dry next week too as that's when the bulk of his herd is due to calve. In the milking shed the rubberwear's been changed, the milking machine's been tested and everything's ready to go. Out on the farm, ditches are being cleaned and laneways repaired.

In Southland calves are starting to appear across the countryside. In the West of the region, a Blackmount Valley farmer says snow on the Takitimu Mountains, above his farm, has all but washed away.  He was in a swede paddock with a mob of bulls when we talked to him - chopping the swedes with a spade to encourage them to eat as it was their first time on the crop. With no rainfall since last weekend the farmer's been able to get the single lambs crutched. They'll be followed by the twins. Shearing's underway too and so far about 2000 ewes have had a trim. Wool prices are looking up a bit. For the 38 micron wool, he's hoping to get $2 a kilo greasy - that's in its raw state. Last year it was a tad over a dollar. He says for it to be profitable it needs to be in the $6 to $7 range.