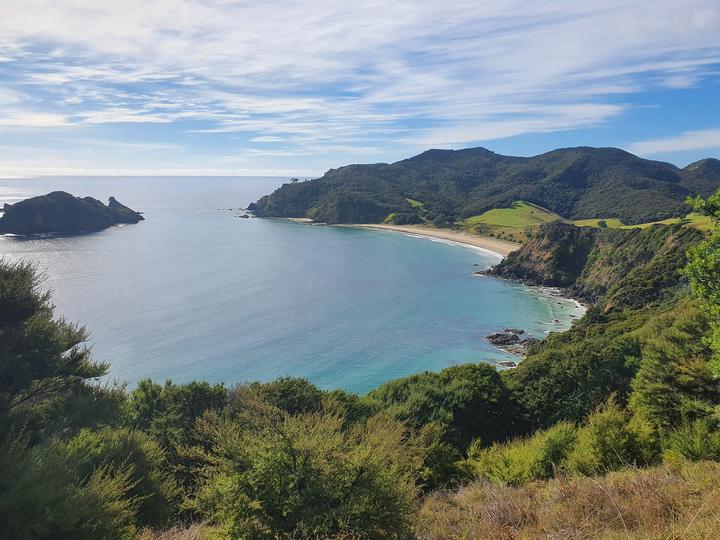 Waikato had hail this week and in the South Island, Marlborough farmers are trying to keep weight on ewes ahead of mating.

Northland's had between 10 and 40 millimetres of rain this week and has come out of its green drought. Kikuyu grass is taking off - which will need to be eaten, mulched or mowed as you can't save it for winter and if it's long, the more nutritious rye and clover pastures can't break through. The consultant we spoke to is a bit nervous about the rising milk price - he says experience shows that if it gets close to 8 dollars per kilogramme of milk solids consumers start looking for a cheaper substitute.  It's now in the mid 7 dollar range.

The last of Pukekohe's onions should be in the sheds by now - export demand has been slow. Many growers are steadily planting their winter greens but come harvest time, will be hoping they're not over supplied like the present glut of tomatoes. At 0.8c a kg retail, people are asking what the growers were paid.

Waikato had thunderstorms on Thursday afternoon - some hail hit kiwifruit orchards and growers were out checking the damage on almost mature fruit.  West of Tokoroa had impressive thunder - 47 millimeters of rain fell there between 4 and six in the afternoon. A farm there has had 132 millimetres in March already compared to just 40 in February. An ag consultant says milk production will recover now and the next two months should be good production months. Many farmers will be able to keep milking well into May.  It's rare that a good production year and a good payout coincide! 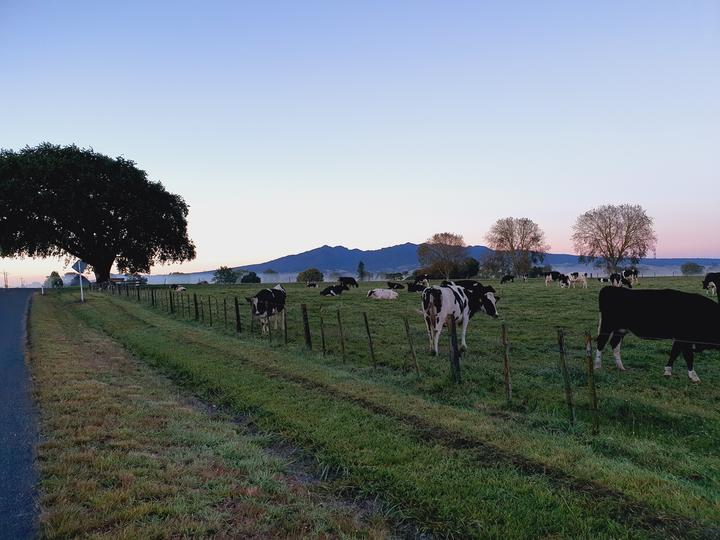 The first of the season's gold kiwifruit is being picked from Opotiki to Katikati over the coming days. Over 80% of New Zealand's kiwifruit are grown in the BOP across 10,000 hectares of orchards.  a record crop's expected so there are a lot of jobs available for picking and packing. Around 20,000 seasonal workers will be required to pick and pack the crop there.

Parts of Taranaki had  20 millimetres of rain on Wednesday night but Stratford had 70. Milk production for March is nearly 50  percent up on last year but that's only because last March was a shocker.  The big news is the high number of dairy cows that failed to get in calf... a horribly wet November at mating time is being blamed.   It's not uncommon to hear of empty rates of more than 20 percent.  15 to 16 is average.  Farmers aim for less than 10. The main maize crop will be harvested soon  - some will have burnt leaves from salt being whipped in from the sea.

Gisborne had a bit of rain on Thursday to freshen things up . .Spinach lovers will be pleased to hear the spinach shortage of three weeks ago is over - a huge 100 millimetre downpour of rain lead to decay in the crop. The grape harvest is coming to an end as is the squash harvest. Squash is off to to Japan, Korea and China - and returns are looking good.

Hawkes Bay farmers are breathing a sigh of relief after a good dose of rain on Thursday, which is easing anxiety about continued dry conditions, after last year's drought.  There was a heavy rain warning in place for parts of Hawke's Bay and Wairoa district, north of Napier until about 1 on Friday .. between 100 and 130 mm were expected to fall. 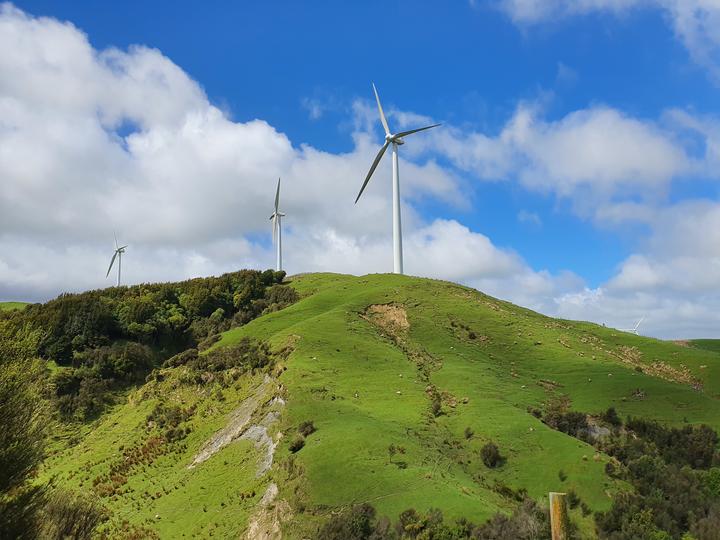 Farmers in Wairarapa have smiles on their dials after good rain... more than 35 millimetres fell on Wednesday and another 10 on Thursday. On-farm conditions look great but it's feared the rain may bring the chance of facial eczema.  A local vet is advising farmers to keep an eye on their sheep and keep up with parasite control.

Green is pushing up through the rank feed left on Manawatu farms after quite a bit of rain this week. Our contact says they're putting out teasers - vasectomised rams - to some ewes. They're used to get the early lambing ewes and first time lambers - hoggets - cycling. She says the rams smell good as they still carry testosterone but obviously won't get the ewes in lamb. Cows are being scanned and pregnancy rates are looking good ... with so much cattle feed around, it's one of the best year's they've had.

It's all go in the Nelson region's hop gardens. The grower we talked to at Wakefield says they're about half way through harvesting. 4 metre long vines go into hop sheds where the cones are removed, graded, kiln dried and packed in bales and then sent to the NZHops plant at Appleby, where they'll be turned into pellets. Pockets of rain this week have been more of a pain than  an issue. Quantity and quality wise the season is one out of the box. Apple growers in the region are also in the thick of harvesting, while most of the grape crop is ripening under bird proof netting 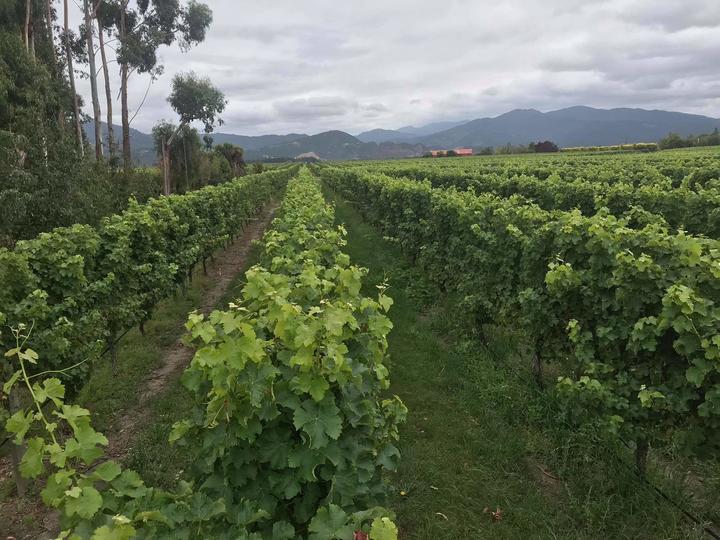 It was very noisy when we rang our contact in Marlborough's hill country. He was weaning calves. Calf sales are around the corner.  He says the province is desperate for rain - and it's one of the driest periods on record now.  The challenge is to build weight on the ewes before they  go to the ram at the end of the month so they are being feed high protein supplements like lucerne baleage and peas . He says how you treat your ewes now dictates your farm income.  In vineyards, the pinot noir, pinot gris and chardonnay harvests are underway and Marlborough's flagship sauvignon  blanc is ten days to a fortnight away.  Grape quality is fantastic this year - partly because it's been so dry, but across the region yields are down because of a poor flowering in November.,

The West Coast had some showery days earlier in the week, ending fine on Thursday and Friday. The top up was perfect and farms are getting the flush of autumn growth that the region is known for. The last of the silage is being cut.

It is very autumnal in Canterbury with days shortening up and dewy mornings. Some rain came during the week but a follow up is needed for the very dry coastal plains and Banks Peninsula. Harvest is well through with mostly late crops such as radish and red clover still to go. On one farm the old 1980's combine was pulled out of the shed in the bid to get as much of the grain crop off as possible. Unfortunately that means stock work has been put to one side. Feed levels are variable in Canterbury with dryland coastal areas very short and irrigated and upper plains ok.

The Central Otago town of Wanaka  is hosting its 84th A&P Show ... people from all over the lower South Island were heading that way mid week. It is a significant boon for both the farming and surrounding community with 500 trade exhibitors from across the country. There were real concerns it was going to have to be postponed after the recent Covid-19 cases in Auckland

Southland's had a mix of rain and sunshine this week - northern Southland really needed a drink.  Grain crops are being harvested and cows are still milking well. The days are drawing in and it's definitely feeling like autumn.