On the Farm; What's happening around rural New Zealand 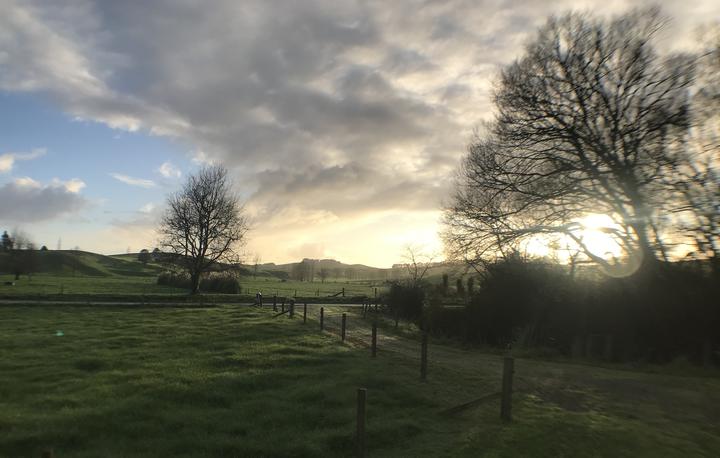 Winter sets in in the north and the effects of the drought are still being felt at the top of the South Island.

It's been a bit more wintry and even a little frosty in Northland. The rain is topping up dams and springs are running, bringing smiles to farmers and growers. Farmers are pretty well off now for feed. They're downloading heavier cattle to the works. Store markets are firming up especially for females which have been hard to move of late.

Around Pukekohe after a stop- go start to the week with rain , showers and fine periods, clearer weather from Wednesday brought frosty mornings. There are many potatoes in storage following a loss of sales for chips and growers are struggling to find a market for them.

In Central Waikato, things are looking very good. The average pasture cover is much higher than usual for the time of year. Despite heavy rain, it's reasonably dry underfoot and soil temperatures are still in the double digits. Farmers are getting organised for calving. There's still some disquiet though among dairy farmers over next season's payout and the price of palm kernel is causing some concern.

Our contact in the Bay of Plenty was enjoying a beautiful but chilly start to the day when we rang. He's three weeks away from calving and as well set up as he could be. There's plenty of grass around and cows are in good condition. A human birth around calving time is also being thrown into the mix so things could be a little busier than normal! Kiwifruit pruning is just getting going. It's feeling a little more like normal after the weird times around harvest. Labour issues mean a delay in getting started though. This time last year they were a third of the way through pruning the gold variety. With uncertainty around the supply of RSE workers  this season, there's likely to be a lower skillset and higher worker turnover in the orchard over pruning and things could get a little testy towards spring. 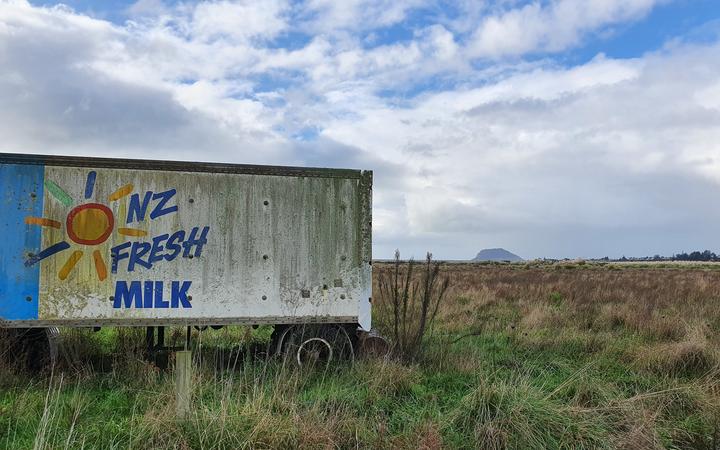 Old trailer standing in a field in Bay of Plenty with Mt Maunganui in the distance Photo: RNZ/Sally Round

It's been horrible weather in King Country and wet underfoot but they did need the rain and it's a good help for pasture going into the winter. Our contact says he's still trying to fatten a few heifers. Tail end lambs are going to the works. After ewe scanning he's pleased with his 160 percent rate but he's hearing horror stories - some farmers are down twenty percent due to the earlier lack of tucker.

Cold and a good vintage

After a sluggish run-up to winter, it certainly arrived this week in Taranaki. There were 20 to 30 millimetres of rain in some parts and some very cold days. Calving happens shortly and most farmers in the region are OK for labour.  On farmer says there's a lot of confidence around. Previously dairy farmers would be cautious around mentioning they milk cows for a living, he says , but they are now proudly calling themselves food producers.

A winegrower on the East Coast was having smoko on a crisp clear day when we rang. It's pruning time in the vineyard. He has enough interns from overseas to help out with the job. It's been pretty chilly and there's been enough rain to keep the farmers happy. Next month he's bottling new young wines. The 2020 vintage is the best in 37 years he says. A number of new kiwifruit orchards are springing up around the area.

Central Hawkes Bay - the centre of the earlier drought - has had fantastic rain and it's hoped recovery will be boosted by the warmer temperatures forecast for the coming week. Dams are only slowly filling as water soaks into parched land. A huge amount of stock has left the region and the lamb drop is forecast to be thirty percent down on previous years. Looking ahead there will be some good prices paid when it comes to restocking.

Apart from the recent cold snap it's been a kind winter so far in Manawatu. A sheep and beef farmer there has had pleasing results from ewe scanning at 175 percent, although back on his record year last year. But he's heard via the scanner of not so good results among a handful of farmers where the drought pinched at the wrong time. He's not getting too carried away with the optimism around beef prices. It's nice being social again in the maimai and around the sports fields. 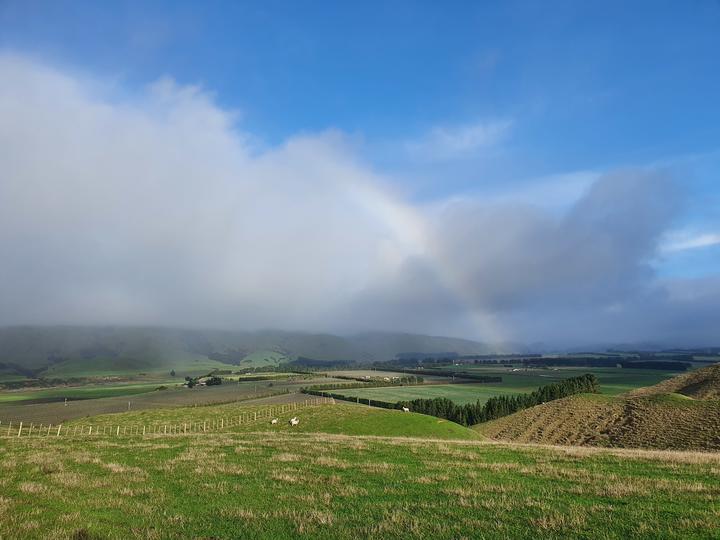 A rainbow midwinter in Wairarapa Photo: RNZ/Sally Round

It's been an awful week weather-wise in Wairarapa. Even the woolly sheep have been keen to find shelter from the rain, wind and cold. Scanning's been done and the first of our contact's lambs are due in September. A few mitigating factors have led to a lower rate than last year at 172 percent.

Across Cook Strait and it was a damp start to the week in the Tasman district, but by mid-week it was fine with clear skies and frosts. There has been a little bit of growth but farmers are worried that because of the drought there is not enough grass to get through to spring.  It depends how the next month goes whether there will be a crisis in August.  And that concern extends to the numerous lifestyle blocks around Nelson ... there is a feeling many are running out of pasture and they need to ask the likes of the Rural Support Trust for help.

A seamless chunk of land from North Canterbury up through Marlborough is still being affected by the drought  ... despite some recent rain there is huge concern around how farms will recover.  Until growth exceeds stock needs in spring, farmers will be stressed.  May was fantastically good which saved some feed covers but it risks being a green drought and reserves farmers thought they had will disappear quickly and have no energy in it. It's tempting for farmers to feed annual grasses they've planted, but they'll get trampled a lot now and again not have much energy value... if they can hold off until spring it would be much better. Apparently some farmers have really panicked about feed and are buying poor quality, expensive hay just so they have something on hand.

Soil moisture is much better by the time you reach central Canterbury.   A very wet week there saw many areas receiving over 100millimetres. There's been no sunshine. The rain has been needed to fill dams and soils after a very dry summer. Snow is still only at high altitudes and not down on the plains at all. 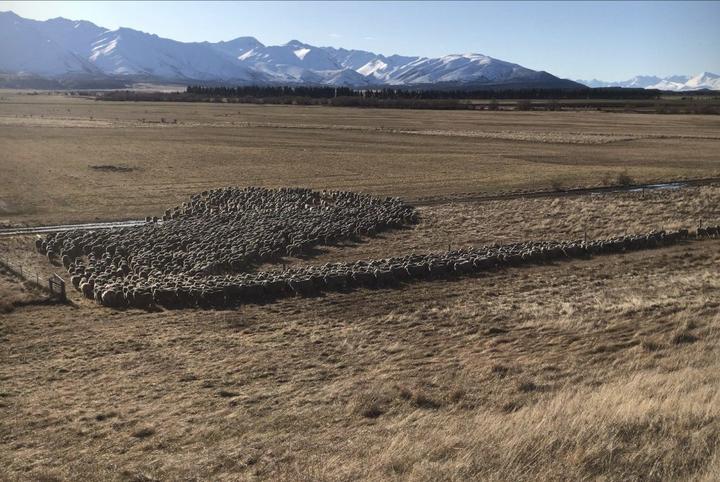 The West Coast has had a wonderful sunny week and farms are looking great.

Central Otago had 40 millimetres of rain ... there was no snow with the rain which is unusual, mind you it still managed to drop to minus seven degrees on Friday morning in the Ida Valley area. Initial ewe scanning results are showing a good number of lambs should be born in spring.

Southland has had a few frosts this week. There hasn't been a lot of rain but things are damp because it's drizzled and there's no wind. Stock are doing well on crops. The yields weren't great this year, but animals are getting the maximum use out of them because it's stayed relatively dry underfoot .. so that's the silver lining. Sheep scanning is just starting .. with poor grass growth earlier in the year there could be a bit of a dip in lamb numbers. .. However our contact near Waimahaka is looking forward to his 55th lambing.  Over to the west, the snow is halfway down on the Takitimu ranges.

Another farmer says he has 20 thousand dollars worth of supplements on farm. He panicked leading into lockdown when he had about 45 percent of his lambs still to go to the meat works, when normally in April he'd have only 10% left.  They've all been killed now but he says the impact of covid will appear on his balance sheet this time next year.