Māori Fusion artist Riqi Harawira has released a music video which draws on footage from NZ Wars: The Stories of Ruapekapeka and is funded by Te Māngai Pāho.

Harawira is a lot of things.  A Guitarist, a Counsellor, a Storyteller.  He’s a former Addict who practises his rehab daily, a Teacher, a Survivor and a Warrior. 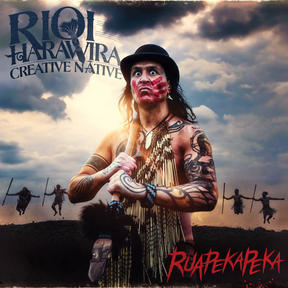 He is both Māori and Pākehā, he is a New Zealander who is proud of all that he is and of his nation.

Riqi strives to be a unifying force through his teaching and his music.  He wields his guitar like a taiaha (Guitaiaha) and melds Rock, Funk and Reggae as he tells both his story and ours.

Launched on Friday, 12th June 2020 Ruapekapeka is his latest offering, a powerful Guitaiaha driven rock anthem with tribal chorus chants that hook you immediately.  It’s laden with beautifully executed playing that weaves into your being.

The song carries a palpable mana with it that reminds us of the famous northern battle between the colonials under Governor General Grey and the combined forces of Kawiti and Hone Heke.

The former Dead Flowers lead guitarist has found his voice too, stepping in front of the microphone and unleashing a mighty tone every bit as striking as his work on the fretboard.

In Ruapekapeka, Riqi has delivered a truly striking piece of work that will have crowds pumping their fists in the air and straining their vocal chords like some contemporary national anthem.

Riqi Harawira is many things but first and foremost he is the Creative Nātive and this is the first taste of what is to come from his third solo album.