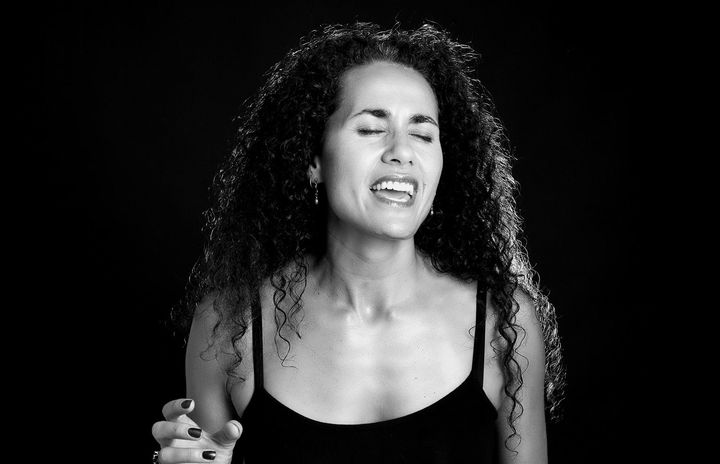 The Samoan word ‘Tusitala’ means ‘storyteller’ – but what about its inverse, ‘tala tusi’, where the ‘teller is the tale?’

In her lyrical and amusing 2016 Book Council Lecture, the storytelling skills of the poet Dr Selina Tusitala Marsh are to the fore. She takes the listener from the book corner of the Avondale Salvation Army shop, to Westminster Abbey where she performed a commissioned poem in front of the Queen. An epilogue explores her riposte to a faded member of the British aristocracy who refused to shake her hand at that event.

After Robert Louis Stevenson moved to Samoa in 1889, the title Tusitala, ‘the teller of tales’, was bestowed on him by Samoan chiefs. His poem Requiem, on his tomb on the summit of Mt Vaea overlooking Apia, is still memorized in Samoan schools today:

This be the verse you grave for me
Here he lies where he longed to be
Home is sailor, home from the sea
And the hunter home from the hill

The poet and writer Selina Tusitala Marsh disagrees with the criticism that the poem is inauthentic because Stevenson was himself far from home. “He learned to speak and write in Samoan,” she says, noting that he even signed his letters as ‘Tusitala.’

Though far from his native Scotland, he had found another home in Samoa, one in which he is now immortalized.

That sense of identifying with where you are is something which was a major point of discovery for Marsh. As a child, she grew up reading and learning that all the ‘real’ stories lie somewhere out there, beyond us?

Her Samoan mother was part of the heyday of Pacific immigration during the 1960s, and after school on Wednesdays we went to the Avondale Salvation Army and the Avondale Spiders secondhand dealers to restock on clothes, pans, and three foot plastic pink flamingoes.

Tusitala Marsh remembers having free reign in the book corner, often staggering out with an armload of books from the late ‘fifties. She particularly liked the compendium nature of The Magic Roundabout Annual, Our Own School Boys Annual and Blackie’s Children’s Annual.

She never identified herself in any of this reading, however, until finding one book whose title escapes her. “It was a about Sarah,” she recalls, “a British blonde pig-tailed girl and family and their new Indian neighbours. I remember how the girl was described as having brown eyes, brown skin and black wavey hair. Finally, someone who I didn’t have to genetically modify to pretend was me!”

Fast-forward a few years, and at university, Marsh studied the work of the men who form the western white literary canon – still the core of an overwhelmingly Eurocentric education curriculum taught throughout the Pacific.

“Of course,” she says, “there’s a place for the memorization of Wordsworth’s ‘Daffodils’. But, when white male tales are taught to the exclusion of indigenous tales; when you’re in Tonga or Samoa memorizing Wordsworth and don’t even know what a daffodil looks like; then Houston – or rather Ha’apai – we have a problem.”

Convinced that beginning storytellers should write from what they know, Tusitala Marsh is keen for them to look inwards, to explore their own lived experience first of all.

And how does she know the teller is often the best tale? Because that truth was refined in a performance she created for what she describes as “a 926 year old historical and cultural pressure cooker in the form of Westminster Abbey, in front of the longest-reigning British monarch in history.”

Tusitala Marsh was commissioned by the Commonwealth Education Foundation to write and perform a poem for Queen Elizabeth II for Commonwealth Observance Day, March 2016. There were, however, a few ‘rules’ about the composition of this work: Called ‘Unity’ it had to be about the 53 member countries of the Commonwealth, and last less than three minutes as the BBC was broadcasting it live. It mustn’t be political, but had to be appreciated by the thousand school children in attendance, along with dignitaries, Heads of State, Prime Ministers, and of course, the Royal Family.

Faced with writer’s block, she settled herself at her kitchen table and wrote with vivid markers on a sheet of A3 paper “There’s a ‘U’ and an ‘I’ in Unity.” This would become the anchor point for the poem, which she performed without a hitch in front of the assembled audience. And this is despite a snub by an elderly aristocrat just minutes before the performance.

And how did the poem’s patron respond? “After asking me how I managed to memorize it all, the Queen commented,” says Tusitala Marsh, “that the poem was ‘very good.’”

There is an epilogue to the story. Thinking of the person who had refused to shake hands with her in the Abbey, when Tusitala Marsh got home, she posted this verse online, set to a ukulele version of God Save The Queen:

‘Pussy cat, pussy cat
Where have you been?’
I’ve been to London
to visit the Queen.

‘Pussy cat, pussy cat
What did you there?’
I frightened the Western World
With my big hair

“I have discovered for myself,” Marsh concludes, “that the teller truly is the tale. Mine keeps telling me, and others, not only where I come from and where I am, but where I am going. Yours can too.”

Dr Selina Tusitala Marsh is a poet and scholar of Samoan, Tuvaluan, Scottish and French ancestry who lives on Waiheke Island. She was the first person of Pacific descent to graduate with a PhD in English from the University of Auckland, and her 2004 doctoral thesis - entitled ‘Ancient banyans, flying foxes and white ginger: Five Pacific women writers’ - focuses on the first Pacific female poets to publish in English. Marsh asserts that literature was an integral vehicle for the empowerment of Pacific women and children in the largely male-dominated post-colonial era: “Poetry was used as a political voice. These women were all quite remarkable boundary-breakers.” She now lectures at the University of Auckland, specializing in Māori and Pacific literary studies.

Selina Tusitala Marsh’s poetry has featured in a range of online literary journals, including Blackmail Press and nzepc. Her writing has been widely anthologized and features in the Montana New Zealand Book Award winning Whetu Moana: Contemporary Polynesian Poetry in English. Her work also features in Mauri Ola: Contemporary Polynesian Poetry in English - Whetu Moana II (Auckland University Press/UHP),Best New Zealand Poems 2006, and Niu Voices: Contemporary Pacific Fiction 1. Tusitala-Marsh has performed her poetry at a range of venues and festivals, and her work has been translated into Ukrainian and Spanish.

As an advocate of Pacific poetry and literature, Selina Tusitala Marsh is the force behind Pasifika Poetry, a companion site of the New Zealand Electronic Poetry Centre hosted by the University of Auckland. Pasifika Poetry is an online hub that celebrates the poetry of tagata o te moana nui (the peoples of the Pacific), featuring video, audio, text, and interviews with a range of Pacific poets.

Auckland University Press published Selina Tusitala Marsh’s first collection of poetry, Fast Talking PI, in 2009. The book won the 2010 NZSA Jessie Mackay Best First Book Award for Poetry, and it made the top 5 Best Sellers List shortly after publication. Fast Talking PI was also named Best First Book at the 2010 New Zealand Book Awards. Albert Wendt wrote in praise of the book, ‘A new generation of poets has emerged in Aotearoa and the Pacific. Most of that generation are women, and Selina Tusitala Marsh, in this, her first collection, shows she is one of the most gifted and influential members of that generation.’

Cathie Koa Dunsford wrote in the Australian Women’s Book Review, ‘She peppers her poetic narrative with the rhythms and staccato of urban hip hop beats, in tune with slick contemporary themes and voices, showing her and their disregard for the romanticisation of the past and for the politics of the present.’ Nicky Pellegrino writes in the NZ Herald, ‘For Marsh, poetry is an inclusive rather than an elitist art form. She’s particularly enthusiastic about going into schools to perform and encourage students to find their own poetic voices.’

In 2012, Marsh was selected to represent Tuvalu in the Poetry Olympics that took place around the UK during the London Olympics and Paralympics. She was selected from among 6000 nominations to participate in the event.

In Dark Sparring (Auckland University Press, 2013), her second book of poems, Selina Tusitala Marsh combats family loss – specifically, her mother’s cancer diagnosis and long journey to recovery - with all the techniques of poetry, ritual and Muay Thai kickboxing that are at her disposal. Dark Sparring has been quoted as ‘an appealing voice, a strong right hook and an affecting, rhythmic heart.’ In her review for the NZ Listener, Lynley Edmaedes wrote that Marsh’s poetry ‘navigates mourning without sentimentality, the vernacular without cultural cringe, and tackles some of the big questions of Pacific diaspora with wit, bravery and poetic and personal integrity. And the result is superb. This collection puts Marsh at the vanguard of contemporary Pacific literature and cements her place as one of the most important poetic voices of her generation.'

In 2015, Marsh attended the Australia and New Zealand Literary Festival in London, during which she won the light-hearted Literary Death Match for poets.

Selina Tusitala Marsh was honoured with the title of Commonwealth Poet 2016, and commissioned to write and perform a poem before the Queen at the Commonwealth Day Observance in Westminster Abbey on 14 March. The theme of the 2016 service was ‘An Inclusive Commonwealth'. The poem she composed, ‘Unity’, explores this concept through conservation and conversation across the globe: “We’re connected by currents of humanity/alliances, allegiances, histories.”

Tusitala Marsh's most recent academic contribution is her chapter in Mark Williams' A History of New Zealand Literature (2016), titled " 'Nafanua and the New World': Pasifika's Writing of Niu Zealand."