Ripe rimu fruits carpet the trees and ground on Whenua Hou and Anchor islands, and most of the 72 living kākāpō chicks are in wild nests, where they are being well-fed by their foster mums. The chicks are putting on lots of weight and are well above average on the kākāpō ‘Plunket’ charts. 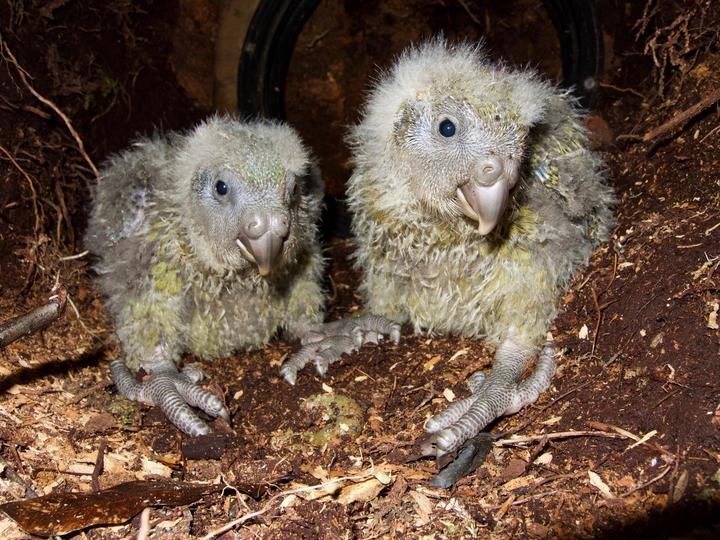 Most kākāpō chicks are now in wild nests, putting on lots of weight as their foster mums feed them lots of rimu fruit. Photo: Andrew Digby / DOC

Deidre Vercoe, manager of the Kākāpō Recovery Team from the Department of Conservation, says a grand total of 249 eggs were laid in this bumper kākāpō season. “It’s a staggering number,” says Deidre.

The total number of chicks hatched so far in this year’s bumper kākāpō breeding season is 79, and there have been seven chick deaths. There are still seven fertile eggs, which are due to hatch between now and Easter.

Deidre says she is “very happy with where we are at the moment.”

Five kākāpō mums are raising clutches of three chicks, and most other nests have two chicks.

Queenie-3-A, the chick that had a broken leg, has completely healed and is being returned to a wild nest on Anchor Island.

Eight chicks are being hand-reared in Invercargill.

Kākāpō scientist Andrew Digby says that male kākāpō are still booming but are beginning to wind down. He says the males are starting to scrap amongst themselves, and he hears a lot of skrarking at night.

The rimu is falling fast on Whenua Hou, carpeting the tracks. This is only the second time in 38 years it's ripened. It's what's driving this bumper #kakapo breeding season. #kakapo2019 #conservation #parrots pic.twitter.com/tGmX9x3Cnd

Checked on #kakapo chick Margaret-Maree-2-B in Tumeke's nest last night. Hadn't seen it since I put it in, so a bit relieved to find that it was doing well, if a bit shivery. #conservation #parrots #kakapo2019 pic.twitter.com/izm0HLQOlu

What kākāpō genes can tell us

Kākāpō sperm collection and artificial insemination in the 2009 breeding season

The discovery of the ‘lost’ kākāpō Rangi and the frozen sperm bank, from the 2009 breeding season

Science in kākāpō management, from the 2009 breeding season